Millard Sheets and the Art of Banking - The Objective Standard 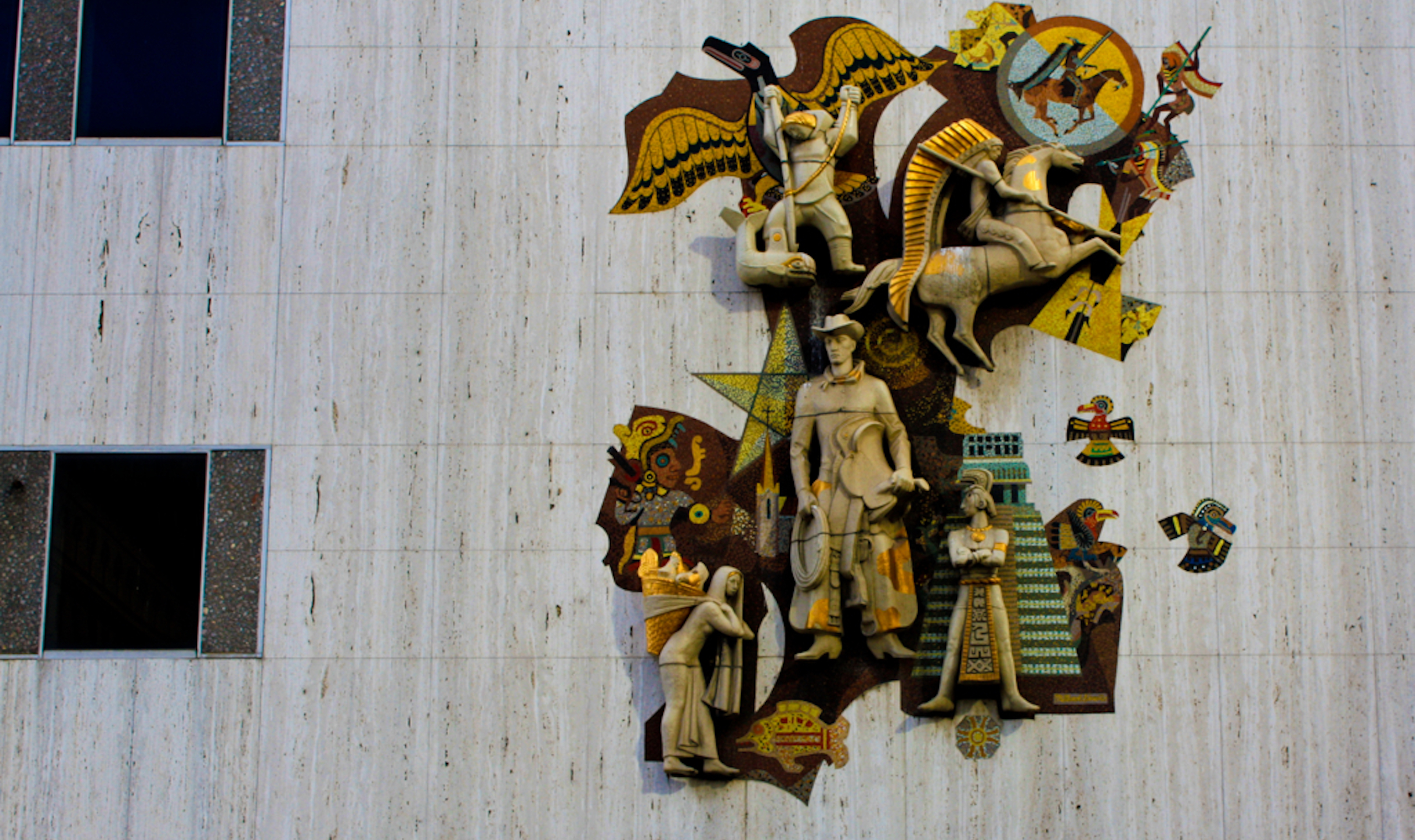 Millard Sheets and the Art of Banking

Millard Sheets’s artwork is instantly recognizable to Southern Californians, even though few of them know his name. As a leading figure in “mid-century modernism,” Sheets created a distinctive aesthetic style best represented by the scores of buildings he and his team designed for Home Savings Bank—buildings strewn across the United States but concentrated primarily in the Los Angeles area. He and his colleagues decorated these sleek, travertine-covered temples with gorgeous mosaics depicting historical and mythological scenes celebrating California culture, particularly the industry and farming that made the Golden State prosper.

Today, two decades after Home Savings’s closure, many of these works have been painted over or demolished, which makes art historian Adam Arenson’s lavishly illustrated Banking on Beauty: Millard Sheets and Midcentury Commercial Architecture in California especially welcome. Arenson has painstakingly cataloged Sheets’s murals and preserved the tale of how he and banking magnate Howard Ahmanson created some of the 20th century’s loveliest public art.

Ahmanson bought Home Savings in 1947, when it was poised to participate in Southern California’s post–World War II population boom. Wanting his banks to look special—particularly the two branches he planned to build in Los Angeles—he wrote Sheets a terse, telegram-like letter in 1953: “Have traveled Wilshire Boulevard for twenty-five years. Know name of architect and year every building was built. Bored. . . . Need buildings designed.”

Sheets, then forty-six, was already well known for his mosaics, paintings, and decorations on commercial structures, and for teaching at Scripps College, where he influenced a generation of students. He was developing a style that would become as characteristically Californian as the work of Thomas Hart Benton is characteristically Midwestern—as evidenced by two map-style illustrations he painted for the American Trust Company in Sacramento. A few years later, he helped design Los Angeles County’s official seal. “Sheets was an impresario,” writes Arenson, “rarely saying no to a project, whether it was an interior remodel, a complete building design, a private home, or a commercial client.”

Still, he was startled when Ahmanson gave him carte blanche for the Wilshire Boulevard building. He wasn’t an architect, he protested. Nevertheless, replied Ahamson, “don’t let [anyone else] tell you how to design this building. I want it done the way you would do it if you were doing it for yourself.” So Sheets planned the building as well as the decorations.

The result was a triumph, particularly the mosaics—which seemed to combine the futuristic, streamlined qualities of art deco with the simple candor of Mexican folk art—and the stained glass windows, which celebrated the history of banking. The overall concept was optimistic and dignified: a contemporary bourgeois art appropriate for a lender proud of its part in transforming the Southern California desert into a land of innovation and plenty. Customers loved it and even wrote Ahmanson thank-you letters. “Whether I chose your establishment . . . for the very soul-lifting wall mural is an enigma even to myself,” one enthused. Another thanked him for having “given Los Angeles beauty and strength where unfortunately, others have contributed oblong boxes.” When the bank sent a questionnaire to customers asking why they chose the Wilshire Boulevard branch, the most common answer was, “We like to be associated with something beautiful.”

That first project was followed by more than 150 others. Each was unique, featuring exterior mosaics and interior murals tailored for the specific location. The Hollywood branch mosaic depicted movies, including Julie Andrews as Mary Poppins. One San Diego location featured an Indian, a conquistador, a Mexican ranchero, a fisherman, and a construction worker. Another San Diego building celebrated the city’s famous zoo. The branch in Downey—where a NASA facility was located—depicted birds flying past Jupiter and Saturn. A mural inside Pasadena’s branch memorialized the Rose Parade.

Although the art world often scoffs at commercialism, some of the world’s greatest artists—from Alphonse Mucha to Georgia O’Keefe—have been sponsored by businesses seeking to promote their products. Where painters and sculptors once were patronized by kings or churches, many modern artists serve commercial customers, and Sheets had no problem with that. The artist, he wrote, must “deal with real clients” and “satisfy their needs [while] never compromis[ing] his own aesthetic judgment.”

For decades, he and his collaborators, particularly painter Susan Hertel, accomplished just that, creating designs that were not only banks but monuments to the promise and abundance of California life. Sadly, after Sheets’s death in 1989 and Home Savings’s closure in 1998, many locations were demolished or renovated, their murals and mosaics destroyed. But—thanks largely to Arenson’s efforts—Sheets’s art is now being increasingly recognized as treasure. Several pieces are being restored or moved to new locations, where their beauty can continue to delight. If you’d like to explore these yourself, you won’t find a better guide than Arenson’s Banking on Beauty.

Sheets created a contemporary art appropriate for a lender proud of its part in transforming the California desert into a land of innovation and plenty.
Click To Tweet