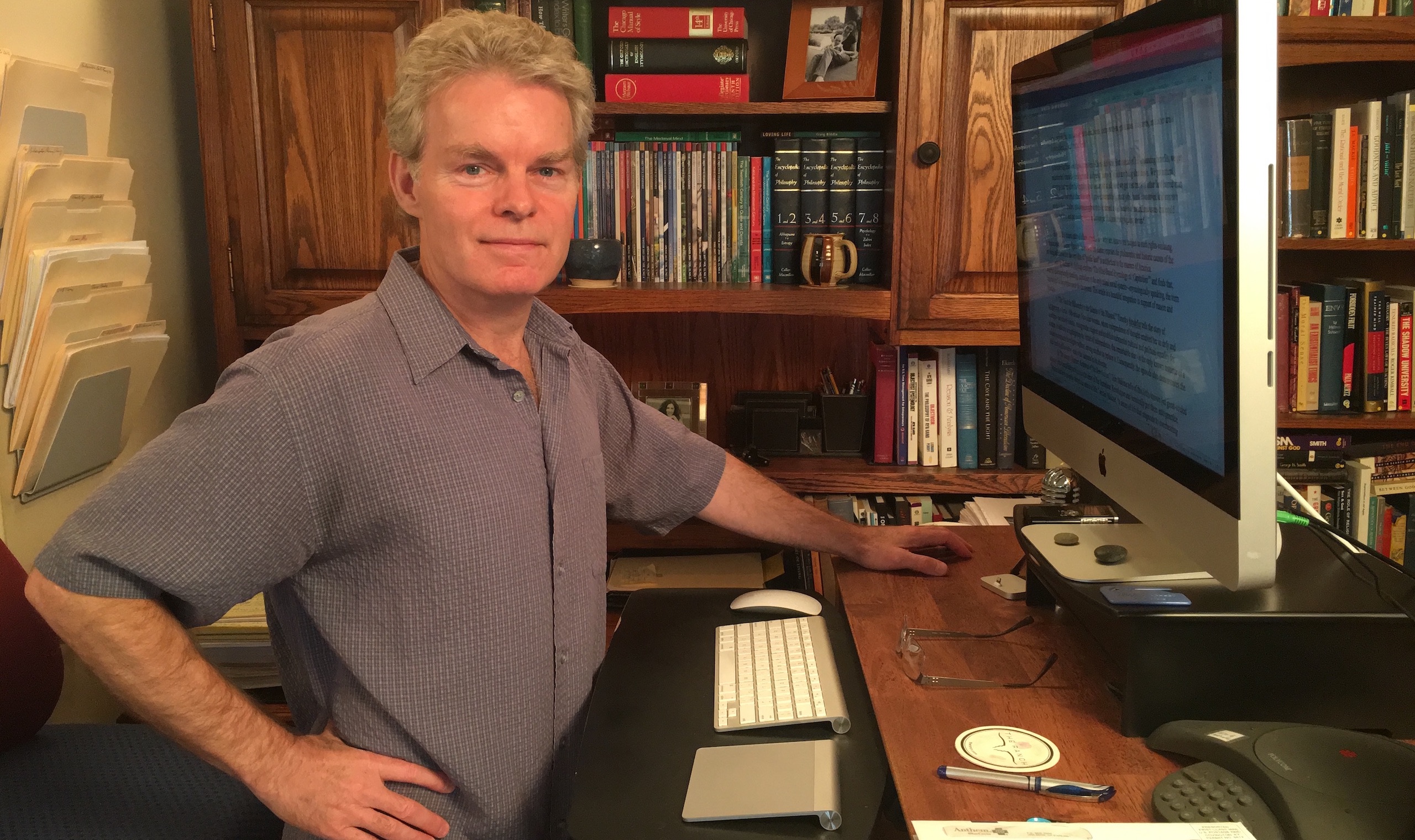 In addition to editing The Objective Standard, Craig Biddle co-founded TOS, built the business from the ground up, and has written hundreds of articles for the journal and TOS Blog. He’s the author of Loving Life: The Morality of Self-Interest and the Facts That Support It and has two books in progress: one on morality for teenagers, another on thinking in principles. He’s spoken at colleges and conferences across the country. And this past summer, he and his team at TOS put on their first multi-day conference, TOS-Con 2018: Philosophy for Freedom and Flourishing.

Like most readers of TOS, I was already familiar with those things. I was surprised, however, to learn that Craig has no formal education in philosophy and that “professional intellectual” was not his first career. As an engineer who likewise has no background in philosophy but wants to transition into a career as a professional intellectual, I was curious about how Craig made the change and how he’s achieved all that he has. So I called him to chat about his journey and how he gets things done. —Jonathan Townley

Jonathan Townley: Good morning, Craig. And thank you for making time to talk with me today.

Townley: You mentioned in a TOS Writers chat that before discovering Ayn Rand’s works, you were a furniture maker. How did you transition from that to being a professional intellectual?

Biddle: It’s a rather unusual story. In college I majored in fine art with a concentration in furniture design, and when I graduated I set up shop and began designing and building furniture for a living. One day, I was delivering a bookcase to a customer, and while we were removing books from her old bookcase I saw a copy of The Fountainhead. I had heard great things about the book from my brother, who was studying architecture at the time. So I started reading the back cover. The customer saw me looking at the book and asked, “Have you not read The Fountainhead?” I said, “no,” and she insisted that I take the book home and read it.

Now, I’m dyslexic. And reading had always been slow, frustrating, even painful. Up to that point, I had read only what was necessary to get through school. And I was not about to read a seven-hundred-page novel. But this was a customer making a kind, heartfelt offer. So I humored her and borrowed the book.

A few days later, curiosity got the best of me and I cracked it open. From “Howard Roark laughed,” I was hooked. It took me months to get through it. But I did. Then I moved on to The Virtue of Selfishness, Atlas Shrugged, and eventually the whole corpus. I had discovered a world of heroism and logic, and I couldn’t get enough.

I was enamored not only of Rand’s powerful stories and life-enhancing ideas, but also of the clarity and soundness of her arguments. She challenged practically everything I had been taught, especially in regard to morality, and she did so in a way that just made sense. After a few years of studying her ideas, and philosophy more broadly, I decided that I wanted to change careers. I wanted to study and promote Objectivism for a living. I wanted to write.

Townley: That’s a big jump, from making furniture to writing for a living. How did you begin moving toward this new career?

Biddle: I began with a measure of audacity, I suppose. Although by that time I had been reading voraciously and studying philosophy for a few years, I had never written anything except what was required for school. Dyslexia makes reading and writing so frustrating and fatiguing that I had avoided both activities at every turn. That’s a large part of the reason I majored in fine art and took up furniture design. Yet now I found myself wanting to do nothing but read and write.

I knew that what I needed most was time—time to learn how to write, to study the art, and to write, write, write. To buy that time, I needed more money than I was making in my furniture business. So, to make a long story reasonably short, after trying my hand at a few sales jobs, which I did not enjoy, I wrote a business plan for a rock-climbing gym. Climbing was my main hobby at the time, and climbing gyms were cropping up all over the country and making pretty good money. No one had opened one in Richmond [Virginia], where I was living, so I figured I’d open a gym, make a lucrative business of my hobby, and ultimately buy time to write. Then things got interesting.

Among the potential investors to whom I sent the business plan was a highly successful real estate developer named Sidney Gunst. Shortly after I sent him the plan, he called and said he wanted to meet for lunch to discuss it. “This is great!” I thought, “The project is all but funded!” When we met, though, he said he wasn’t interested in funding the climbing gym. Instead, he wanted me to come to work for him and write business plans for his real estate ventures. I said I wasn’t interested in real estate or writing business plans and that I had written this plan only because I wanted to open the climbing gym. As we discussed the matter further, he said, “Look, climbing is your hobby. If you open the gym, it’ll no longer be your hobby—it’ll be your business. Then it won’t be fun anymore. Why do that? What’s your long-term goal? You want to make money, right?” When I told him that what I ultimately wanted to do is write about philosophy, he replied, in effect, “Philosophy? Who needs it?!”

Biddle: As you can imagine, that started quite a conversation. I proceeded to tell him about Ayn Rand and Objectivism. He grilled me about why this philosophy or any philosophy could possibly matter in the real world. I answered his questions, one by one, making the case for the vital importance of philosophy in general and Objectivism in particular. And he became increasingly curious about the ideas.

Our initial meeting was followed by many more, and although Sid never funded the climbing gym, he did something much better. After reading Atlas Shrugged and coming to see the vital power of Rand’s philosophy, he offered to fund my writing of a book introducing people to the ideas. I made clear that I still needed to learn how to write. But by this time, Sid and I had had many lengthy discussions about Objectivism, and he liked my way of concretizing and clarifying things, so he was confident that I could write a good book on the subject. We hashed out details, shook hands, and suddenly I was being paid to write. I sold the business plan for the climbing gym to some friends, who proceeded to open a far more impressive one than I had planned. I then helped Sid write a couple of business plans, which was part of our deal, and I hunkered down to write a book. . . .

View all articles by Jonathan Townley →
Letter to the Editor
Dr. Joseph Warren: Architect of the RevolutionFunds Are Available for Advancing Objectivism: An Interview with Carl Barney

1. OPAR is the acronym for Objectivism: The Philosophy of Ayn Rand, by Leonard Peikoff (New York: Dutton, 1991), which is a systematic presentation of Rand’s philosophy.