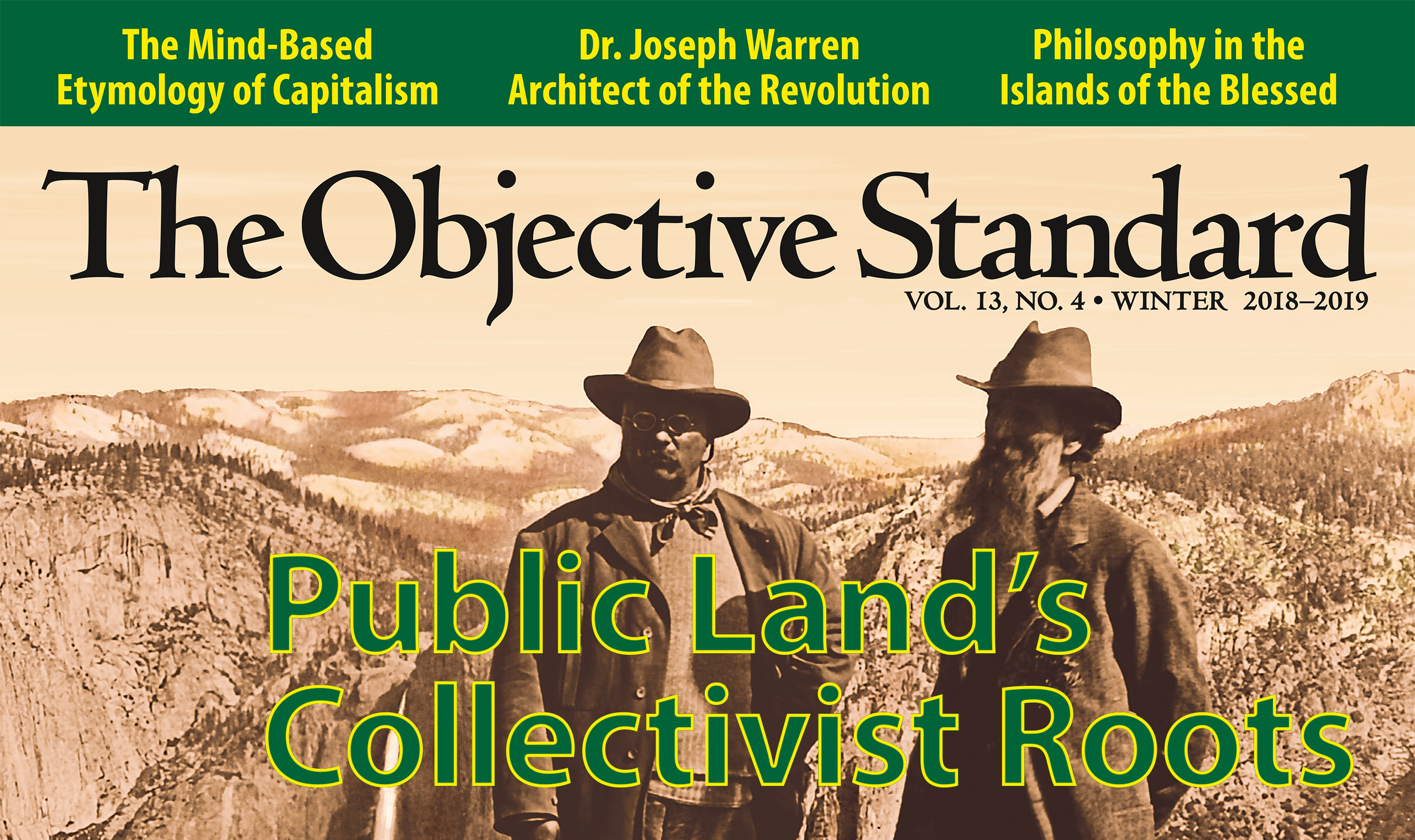 Welcome to the Winter 2018–2019 issue of The Objective Standard.

A couple of announcements before we get to the contents.

This issue marks the end of TOS’s thirteenth year of publication and, with your continued business and support, the beginning of many more. So, I want to thank you—our subscribers and donors—for making this journal possible. Without your support, TOS wouldn’t exist. And with your support, the publication not only continues but constantly improves. I know that I speak for everyone at TOS when I say, from the core of my soul: Thank you.

Also, with this issue, longtime contributor Timothy Sandefur joins TOS’s masthead as a contributing editor. Mr. Sandefur brings to the table great expertise in history and law, among other things, and we’re fortunate to have him aboard. (Being a contributing editor, or any other kind of editor, for TOS does not mean that one agrees with everything published in its pages; nor does it mean that TOS agrees with every position of the contributing editor. Such a disclaimer should not have to be made, but in an age of tribalism and the “gotcha” mentality, it’s a sensible measure.) Welcome aboard, Timothy!

How did this bizarre state of affairs come to be? Why are Americans subject to such rights-violating, economic insanity? Hersey digs into the roots of the matter, exposes the philosophic and historic causes of the problem, and shows that the very idea of “public land” is antithetical to the essence of America.

Next up, Richard M. Salsman explores “The Mind-Based Etymology of ‘Capitalism’” and finds that, whereas philosophically speaking, capitalism is the only moral social system—etymologically speaking, the term “capitalism” is the perfect name for the system. This article is a beautiful integration in support of reason and freedom.

In “The Need for Philosophy in the Islands of the Blessed,” Timothy Sandefur tells the story of Ka‘ahumanu, a heroic 18th-century Hawaiian woman, whose independence of thought enabled her to defy and overthrow her nation’s brutal, misogynistic religion and establish substantial cultural and political equality for women. In addition to highlighting the virtue of independence, this remarkable story is the only known instance of a culture abandoning its religion without having another to replace it. Consequently, the episode also demonstrates the vital need of philosophy—and what happens in its absence.

In “Dr. Joseph Warren: Architect of the Revolution,” Tom Malone tells of this little-known yet great-souled founder, who beautifully articulated the ideas of the American Revolution and heroically put them into practice. “Warren had a thoroughly American sense of life,” writes Malone, “a sense of life that responds to overbearing authority, not with submission, but with bold defiance.” Malone makes a strong case that “[h]ad he not died so soon in defense of liberty,” Warren “very well may have become the first president of the United States.”

Next is my interview with Carl Barney, in which he explains how and why “Funds Are Available for Advancing Objectivism.” Through his Objectivist Venture Fund (OVF), Mr. Barney has provided approximately $4 million in funding to more than sixty ventures so far—and he’s eager to provide more. So, if you have an idea for a project that will advance Objectivism, or if you have an existing project in this vein that could be improved or expanded with funding, or if you know anyone who does, this opportunity is for you. Read the interview. Share it with friends. Apply for a grant or a scholarship. As Mr. Barney says, “If you have a good idea, you have nothing to lose—and perhaps an exciting venture to gain. I encourage you to apply!”

Next up, Jonathan Townley interviews me about how I discovered Objectivism, how I became a writer, and how I get things done. I’m fortunate to do what I love and love what I do for a living, and I was delighted to chat with Jonathan about my history, my work, and a few standing orders that I find highly effective.

I hope you enjoy the issue. From all of us at TOS, have a wonderful holiday season and a prosperous new year! —Craig Biddle