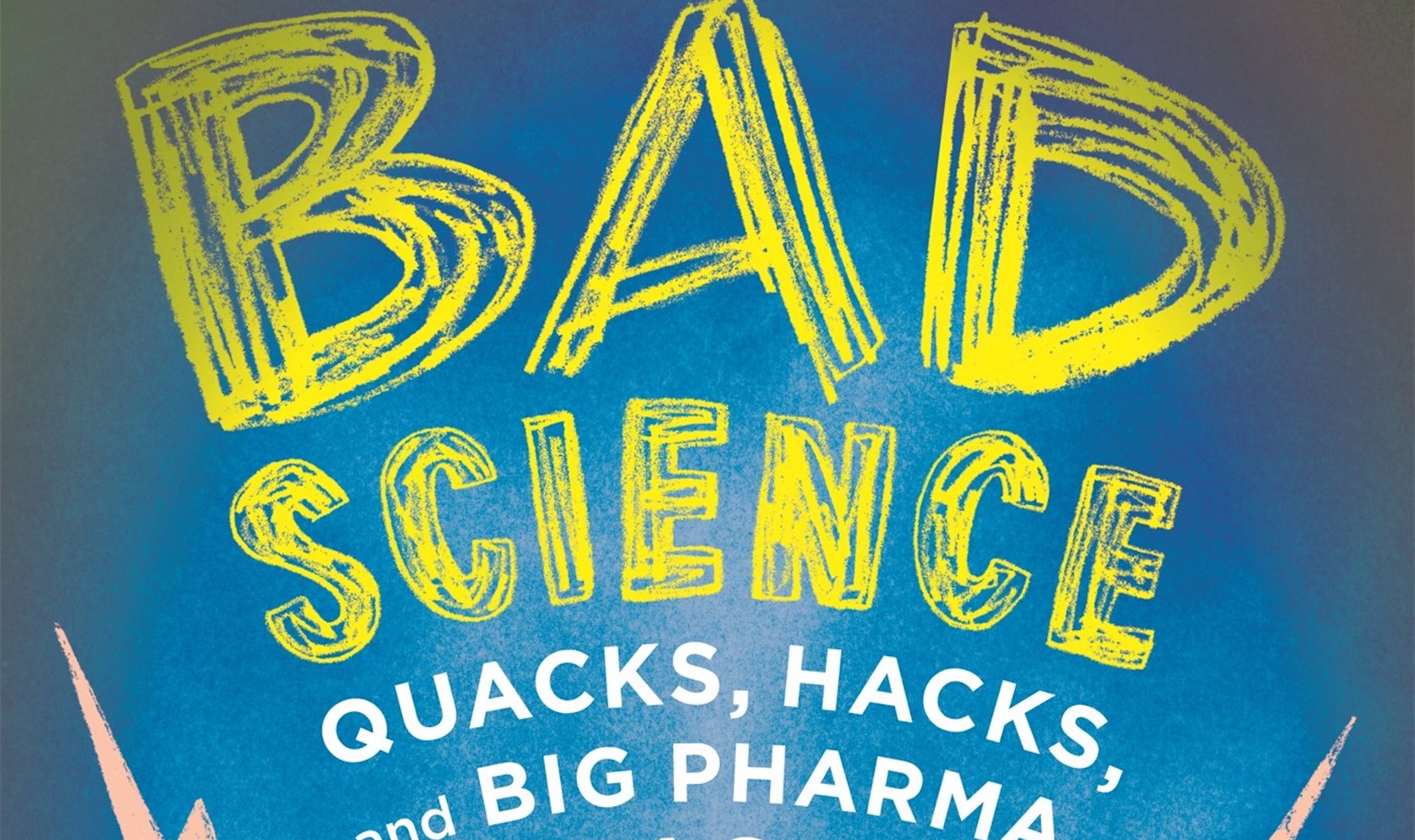 In order to lead healthy and productive lives, we have to make all manner of health-related decisions. But often we are buried under an avalanche of claims—many of which contradict one another. In Bad Science: Quacks, Hacks, and Big Pharma Flacks, Ben Goldacre outs many of the most heinous sources of misleading health-related claims and provides scientific and statistical tools that readers can use to understand those claims and come to their own conclusions. The book is loaded with examples from schools, courtrooms, medical journals, newspapers, and doctor’s offices, all illustrating how science can be twisted and used against us. Goldacre cuts through the noise in a range of debates, from the popular education program known as Brain Gym to the “MMR [mumps, measles, rubella vaccine] causes autism” scandal. And he teaches readers how to evaluate claims about supplements, nutrition, homeopathy, prescription drugs, and more.

Goldacre relays that he enjoys speaking with people who disagree with him; however, as he bemusedly explains, “repeatedly I meet individuals who are eager to share their views on science despite the fact that they have never done an experiment” (3). Toward eliminating the possibility that his readers might be or become such individuals, within the first few pages he teaches us how to conduct several experiments using “kitchen chemistry.”

“Dismantling our early, more outrageous pseudoscientific claims is an excellent way to learn the basics of science,” he writes, “partly because science is largely about disproving theories.” Goldacre teaches readers how to debunk several claims about “detox,” and his dry British humor makes for some hilarious science lessons. “The detox phenomenon is interesting because it represents one of the most grandiose innovations of marketers, lifestyle gurus, and alternative therapists: the invention of a whole new physiological process. In terms of basic human biochemistry, detox is a meaningless concept (11).”

One of the many characteristics of pseudoscience that Goldacre points out is what he calls the “hassle barrier.” Consisting of “lengthy documents full of science that . . . have diagrams and graphs and the appearance of scienciness,” hassle barriers provide us with no useful information whatsoever, because they report “results” without revealing the methods used to obtain them. As he teaches, we can't evaluate a study without evaluating its methods.

Those who employ pseudoscience are, as Goldacre says, “driven by their desire to create a market for themselves, in which they are the expert, whereas you are merely bamboozled and ignorant.” He adds, “Prepare to switch roles” (88).

In a chapter titled “The Nonsense Du Jour,” Goldacre introduces us to “‘nutritionists,’ members of a newly invented profession who must create a commercial space to justify their own existence” (87). He’s “not deriding simple, sensible, healthy eating advice.” However, many influential nutritionists grossly misinterpret scientific studies, and readers of Bad Science get a tour of their mistakes.

For instance, consider nutritionists who prescribe a particular diet or medical intervention by extrapolating from experiments on cells in a Petri dish. Maybe you’ve encountered the “health guru” Michael Van Straten. Writing in the British Daily Express, Van Straten claims that recent research shows turmeric to be “highly protective against many forms of cancer, especially of the prostate,” and he encourages people to eat more curry. This advice comes from studies of cells dabbed with turmeric extract. Curcumin is the active biological element in turmeric, and as Goldacre explains:

You have to eat a few grams of it to reach significant detectable serum levels, but to get a few grams of curcumin, you’d have to eat one hundred grams of turmeric, and good luck with that. Between research and recipe, there’s a lot more to think about than the nutritionists might tell you. (97)

The scariest aspect of Bad Science is Goldacre’s exposé of the methods used by pharmaceutical companies to dress up (or cover up) the results of studies on their drugs. Because trials are enormously expensive, the vast majority of them are done by drug companies, which means, of course, that “drug companies have a huge influence over what gets researched, how it is researched, how the results are reported,” and so on (153). Goldacre reveals an arsenal of tricks that drug companies often use to exaggerate the efficacy, desirability, and safety of their drugs. These tricks include testing them only on young, healthy people unlikely ever to need them; skimping on the dosage of competitor drugs during comparison trials; and inaccurately recording data on negative side effects. To illustrate this last distortion, Goldacre relays that anorgasmia, the inability to experience orgasm, is a common side effect of SSRI (selective serotonin reuptake inhibitor) antidepressants.

We should be clear (I’m trying to phrase this as neutrally as possible): I really enjoy the sensation of orgasm. It’s important to me, and everything I experience in the world tells me that this sensation is important to other people too. Wars have been fought, essentially, for the sensation of orgasm. There are evolutionary psychologists who would try to persuade you that the entirety of human culture and language is driven, in large part, by the pursuit of the sensation of orgasm. Losing it seems like an important side effect to ask about. And yet various studies have shown that the reported prevalence of anorgasmia in patients taking SSRI drugs varies between 2 percent and 73 percent, depending primarily on how you ask. (156)

So researchers can, and do, dramatically alter the reporting of side effects by poorly wording important questions or not asking them at all.

Goldacre does not shoot from the hip but consistently relies on and points readers to properly conducted studies that anyone can reference. He mentions one systematic review that “tells a particularly Alice in Wonderland story.” It was a review of fifty-six different painkiller trials, each with the result that “the sponsoring manufacturer’s drug came out as better than, or equal to, the others in the trial.” He adds, “On not one occasion did the manufacturer’s drug come out worse.” “To put it bluntly,” Goldacre writes, “this review of fifty-six trials exposed a singular absurdity: all these drugs were better than one another” (160).

Goldacre admirably catalogs many methodological sleights of hand used in scientific studies and offers advice for detecting some of them in action. After Goldacre has stoked his readers’ curiosity, some will no doubt crave a more comprehensive approach to examining scientific papers. For those who would like to dive deeper, he recommends Trisha Greenhalgh’s How to Read a Paper.

Goldacre made one strange structural decision in Bad Science worth mentioning. Chapter 10, “Why Clever People Believe Stupid Things,” provides a general overview of common thinking errors, including the propensity to see patterns in randomness, confusing correlation with causation, and others. In my experience, this would have been useful information to have in mind while reading the preceding nine chapters—so readers might want to start there.

At times, Goldacre is a bit long-winded in his criticisms of the purveyors of bad science (not that they don’t deserve every line he writes). He’s also ambivalent about the profit motive in medicine. And on the few occasions that Goldacre trots out a statement on politics, he appears to support paternalistic government. Of course, governments can’t protect us from bad science. We have to protect ourselves; and to do so, we have to employ tools such as those that Goldacre offers.

Anyone interested in arming himself against the barrage of fanciful claims and pseudoscience surrounding health and medicine should have no trouble looking past these minor flaws. Goldacre writes, “At school you were taught about chemicals in test tubes, equations to describe motion, and maybe something on photosynthesis . . . but in all likelihood you were taught nothing about death, risk, statistics, and the science of what will kill or cure you” (2). Bad Science is a clear and humorous primer that helps to fill this gap.

View all articles by Jon Hersey →
Morality as the Science of Human FlourishingDr. Josh Umbehr on the Rapid Growth of Direct Primary Care
Return to Top