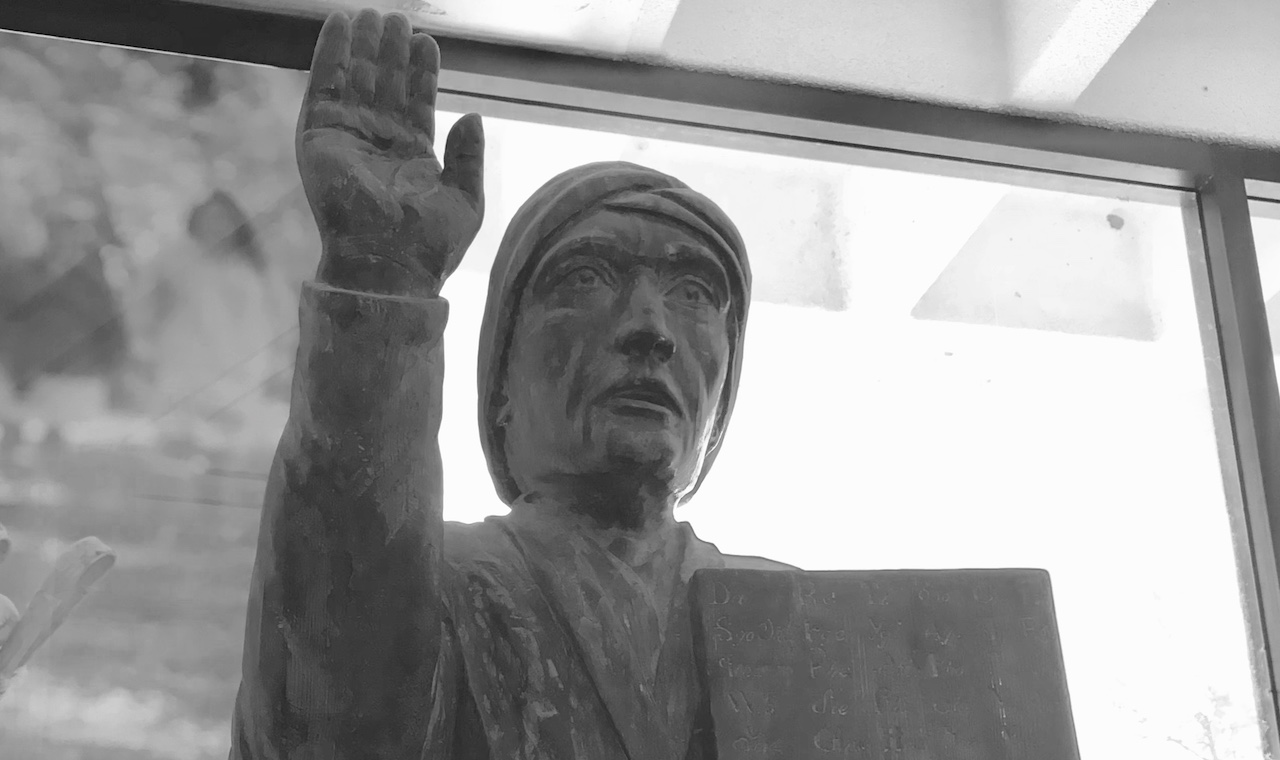 Sequoyah and the Vital Nature of the Written Word

On a December evening in 1840, the writer John Howard Payne—known to Americans today, if at all, for his song “Home, Sweet Home”—was invited to a meeting in Park Hill, Oklahoma, about seventy miles southeast of Tulsa. Payne was excited. The meeting was to be held at a cabin owned by John Ross, chief of the Cherokee tribe, and he would have the honor of meeting the tribe’s most distinguished citizen, perhaps the most celebrated Native American in history: the linguist and diplomat, Sequoyah.1

The fifty-year-old dignitary did not disappoint. Wearing a long, dark blue robe and the traditional Cherokee turban, he seated himself by the fire and lit a pipe. “His air was altogether what we picture to ourselves of an old Greek philosopher,” Payne thought.2 Sequoyah was asked to recite some Cherokee legends, and Payne waited, quill in hand, to preserve his words for posterity. But the older man began speaking in his native language—he either did not know, or refused to speak, English—and Ross and a young interpreter present were so enraptured by his words that they failed to translate. “He talked and gesticulated very gracefully,” the author recalled afterward. “His voice alternately swelling,—and then sinking to a whisper,—and his eye firing up and then its wild flashes subsiding.” But Payne understood nothing. The next morning, when he asked Sequoyah to repeat the story so he could write it down, the older man refused—and his words have been forever lost.

The irony is that this anecdote so perfectly illustrates the fleeting nature of oral communication—and the degree to which Sequoyah’s invention, the Cherokee syllabary, revolutionized his tribe’s culture. In the 1820s, he became the only person to invent a form of writing without already knowing another one, or so it is believed.

The skill of language is so precious that philosophers since Aristotle have seen it as the dividing line between humans and animals. But valuable as it is, language evaporates the moment it is uttered—unless it can be preserved in written form. Countless civilizations have risen and fallen with only spoken languages, leaving few clues about their cultures. The Inca deserted Machu Picchu, for example, only a few decades after building it—but due to the lack of written language, no one knows why. The Sinagua peoples of ancient Arizona left behind the ruins of whole towns, but virtually nothing is known of them, or about what archaeologists call The Mississippi Culture, which thrived in an immense territory stretching from the Great Lakes to Florida as recently as the year 1500. Knowledge of these and other societies has been obliterated by time because they left no written record. . . .

1. This article could not have been written without the generous help of Jennifer Reeser.

27. Elias Boudinot, “An Address to the Whites,” in Cherokee Editor: The Writings of Elias Boudinot, edited by Theda Perdue (Athens: University of Georgia Press, 1996), 76.

33. Lawrence Panther, presentation at Sequoyah Cabin Historic Site, May 19, 2018. Panther, a teacher of Cherokee, points out that this order is far harder for students to learn than Sequoyah’s original arrangement. Like other scholars, he suspects that Sequoyah’s original arrangement of the symbols used some mnemonic device of mythological significance, now lost, that made it easier for the first generation of students to catch on quickly.

35. It was originally published in English, but after Boudinot’s assassination, was translated into Cherokee and printed in Sequoyan.

39. King’s painting was destroyed in a fire in 1865, but a copy was preserved and remains in the National Portrait Gallery today. All subsequent likenesses of Sequoyah are derived from it.

42. Thurman Wilkins, Cherokee Tragedy: The Ridge Family and the Decimation of a People (Norman: University of Oklahoma Press, 1989), 237.

44. James Mooney, “Sacred Formulas of the Cherokees,” in Seventh Annual Report of the Bureau of Ethnology to the Secretary of the Smithsonian (Washington, DC: Government Printing Office, 1886), 308.

46. In 2012, scholar Gary Lowe published an article arguing that Endlicher did not intend to name the tree for Sequoyah, but that Sequoia semperiverens, referred to the fact that he was classifying the tree in a sequence with similar trees; “Sequoia came directly from the Latin for ‘sequence.’” Gary Lowe, “Endlicher’s Sequence: The Naming of the Genus Sequoia,” Fremontia 40, no. 1 (January–May 2012), 30. Others dispute this, pointing out that if Endlicher had meant to refer to the next in the sequence, he would have used the name Sequenta sempervirens instead. Nancy E. Muleady-Meacham, “Endlicher and Sequoia: Determination of the Etymological Origin of the Taxon Sequoia,” Bulletin of the Southern California Academy of Sciences 116, no. 2 (2017): 144.

50. My thanks to poet Jennifer Reeser for bringing this poem to my attention. The English translation of this poem appears in The Rattlesnake Band and Other Poems (Bloomington: Indiana University Press, 1984), 1. Reeser, a Cherokee poet herself, writes poetry in Cherokee, but not in syllabary.