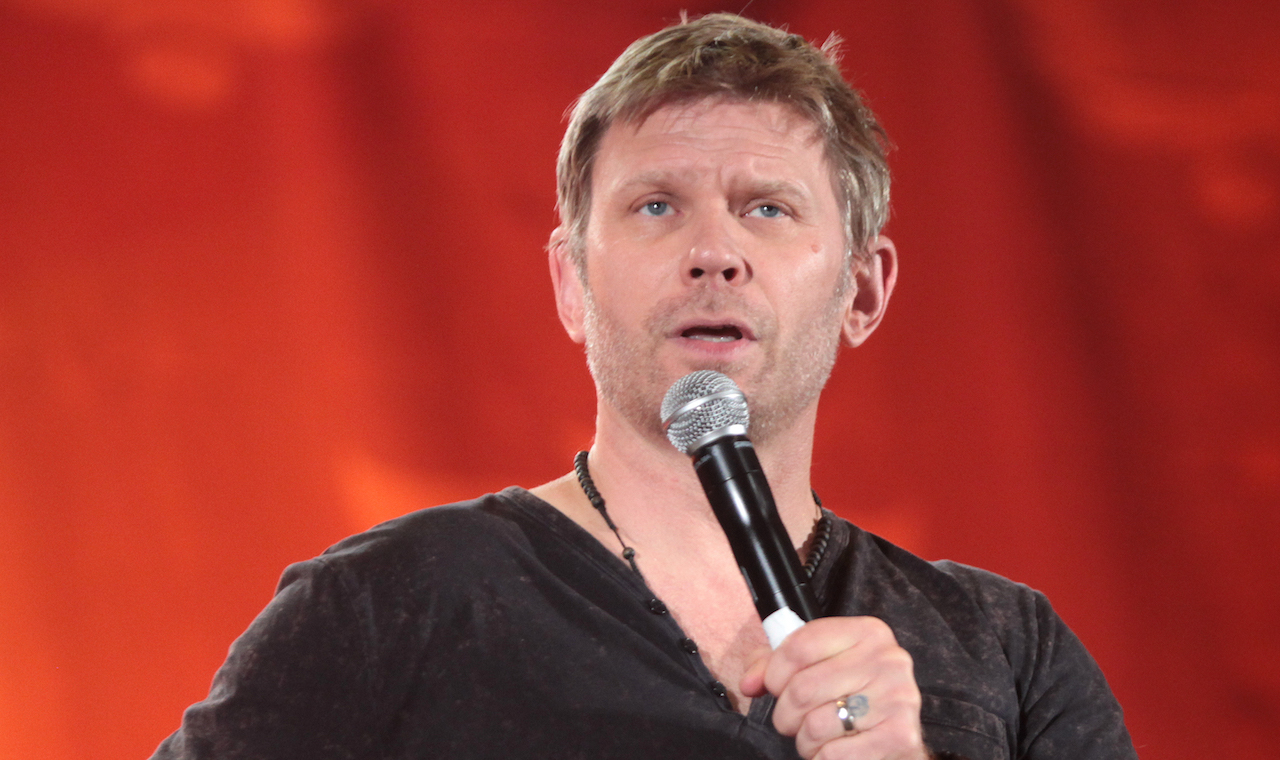 “You know nothing of rights or politics. Your ramblings on such matters are of no benefit to anyone. Please—just stick with acting or directing.”

That’s often a legitimate reaction when someone in Hollywood pontificates about rights or politics. But when Mark Pellegrino talks, people would do well to listen. He backs his ideas with reason, historical facts, and objective moral principles.

Mark is widely known for his roles as Paul Bennett in Dexter, Jacob in Lost, Lucifer in Supernatural, Bishop in Being Human, Giff in Bad Turn Worse, Jack Winship in The Returned, Clayton Haas in Quantico, and many other roles. But he’s also an intellectual activist, an Objectivist, and a cofounder of the American Capitalist Party (ACP). His activism is the focus of the following interview.

I first met Mark on Twitter, where I found him arguing at length in support of Israel, sharing articles and videos from The Objective Standard and the Ayn Rand Institute, promoting Alex Epstein’s book The Moral Case for Fossil Fuels, and generally doing things that could get him evicted from Hollywood. Shortly thereafter, I heard his interview with Dave Rubin, which is one of the most eloquent discussions of Objectivism I’ve ever heard. I’m delighted to introduce readers of TOS to the philosophic side of this great actor. —CB

Craig Biddle: Thank you for making time to chat with me, Mark.

Mark Pellegrino: Thank you. This is quite an honor for me.

Biddle: You’ve been interviewed many times about your work as an actor, how you got into the business, and the various roles you’ve played, so I’m not going to repeat those questions here. People can easily find those interviews by searching your name.

What I’d like to focus on today is what makes you one of the most unusual actors in Hollywood—the fact that you’re an advocate of freedom, capitalism, and the moral and philosophical foundations on which they depend. How and when did you become interested in these ideas?

Pellegrino: It began in the late eighties and early nineties, with my first exposure to the art and craft of acting. The founder of the theater company where I studied had the distinction of being rabidly anti-Hollywood. Basically, he was a conservative. But unlike most conservatives in Hollywood, who are largely closeted for fear of being fired, he was openly political and defiantly anti-left. The era of political correctness was just beginning, so his classroom rants—including scene critiques that would swerve into long cultural commentaries—didn’t provoke lawsuits or massive public outcry, but they did make people mad.

I was then a leftist myself, but I hadn’t personalized my politics so much that I was closed to his arguments. I was actually intrigued by the things he was saying. He made me question my premises. As a result, I became curious about alternate ways of looking at the world. My curiosity led me first to talk radio and the likes of George Putnam, Rush Limbaugh, Michael Medved, and Dennis Prager. Listening to them prompted me to read their books. I also began reading conservative and right-leaning publications such as National Review, Reason, and The Conservative Chronicle. The latter turned me on to the likes of Charles Krauthammer, Bill Kristol, Thomas Sowell, Walter Williams, Charles Murray, and many other intellectuals toward the political right. Through some of these folks (mostly Sowell and Williams), I found that I had a soft spot for liberty and economics, but I still felt something was missing. I found that missing element when I exchanged some books with an actor at the theater company. I gave him five books that influenced my life (I only remember three of them), and he gave me two: The Fountainhead and Atlas Shrugged. That was the mid-nineties. I’ve never recovered.

Biddle: Here’s hoping you never recover. Which three books do you recall giving to him?

Pellegrino: The Road Less Traveled by M. Scott Peck, Way of the Peaceful Warrior by Dan Millman, and Illusions by Richard Bach. Good books, all. But it wasn’t exactly an even trade.

Biddle: I’ll say. You made out like a bandit.

Among your liberty-oriented projects is the American Capitalist Party, which you cofounded. I understand it’s still in the early stages of development, but what can you tell us about the ACP at this point? In particular, what’s the purpose of the party? And what are its main positions in terms of domestic and foreign policy?

Pellegrino: Right now, it is only a platform of governing principles and rough political goals. Our purpose is twofold: First—and if we achieve only this, we’ve achieved a lot—we want to help people to think about politics in a way they haven’t before. In the main, people think of politics as two or more opposing sides clashing in debates over social problems, with the purpose of the debates being to achieve a compromise solution. This compromise is supposed to represent the “moderate” and thus “rational” approach to solving the problem. People familiar with Objectivism know that a compromise can take place only between parties who agree on essentials or ultimate goals. When the parties agree on essential aims, the haggling is merely over details or means of accomplishing those goals.

This, of course, is the lay of the political landscape right now: Two parties, in essential agreement about the proper functions of government, are haggling over how the government should achieve its ends. They agree that government should control the economy, control people’s lives, and make people and businesses give their “fair share” to society. They disagree only on matters of degree and on the particular means to these ends. They argue over whether individuals should be controlled by the federal or state governments—in the bedroom or the boardroom—in health care or investments. They disagree over how government should redistribute wealth—in the traditional ways, or in newfangled ways. And, agreeing on essentials, they come up with all sorts of ideas and programs for controlling people and redistributing wealth. They never question the premise that this is what government should do. That’s an unchallenged absolute. The only questions are how and to what extent should government interfere and redistribute.

But this allegedly proper purpose of government needs to be challenged—as does the idea that all compromise is good.

In point of fact, there are only two political alternatives, and no compromise can morally be brooked between them. The alternatives are statism or liberty—that is: government that initiates force against people—or government limited to using force only against those who initiate force. Any compromise between the two favors statism—and leads eventually to full statism. This is not just theoretical. It’s a demonstrable fact. As just one example, observe that from the time of the U.S. founding until the dawn of the Progressive Era—which was the advent of statism in America—the government spent 3 percent or less of the GDP. It now spends close to 40 percent and is increasing rapidly with no end in sight.

In point of fact, there are only two political alternatives, and no compromise can morally be brooked between them. The alternatives are statism or liberty.
Click To Tweet

The ACP challenges the status quo that our political alternatives are one form of statism or another. We recognize that the proper purpose of government is to protect individual rights and achieve full liberty. And our platform is all about how to move steadily in that direction.

When people see that the ACP’s platform is focused on establishing and maintaining liberty, and when they see how uncompromising it is toward this end, my hope is that they will begin to see politics less as an exercise in pragmatism and more as an application of moral principle. The main moral principle here is individual rights—the rights to life, liberty, property, and the pursuit of happiness. Of course, everyone is familiar with those terms. The problem is that although everyone has heard of these rights and nods about them, few people know what they actually mean or why we have them. And this leaves people ill-equipped to advocate or defend rights.

The ACP aims to educate Americans about the nature of capitalism and the source and meaning of individual rights so that people really understand these values. As more and more Americans come to understand them, they will see that statism does not have the moral high ground. Capitalism does. They’ll see that capitalism is the only moral system because it’s the only system that leaves people free from force so that they can think, produce, trade, and prosper.

So that’s our primary purpose: to educate people about the morality of capitalism.

Our second purpose is to encourage and support knowledgeable capitalists in taking that first step and running under the ACP banner for local, state, or national government. I’ve approached a number of people about this, and some have expressed interest. Some of them already have national prominence, and some are in the midst of acquiring it. Of course, there are several steps involved in getting onto ballots, and we’ll need money to move forward. But we’re ramping up for a fund drive, and I’m confident that there are enough willing capitalists out there to help us get this vital party off the ground. Then the hard work begins. Once we run candidates, we become a threat to a highly entrenched party duopoly, and power doesn’t release its grip without a fight. . . .

View all articles by Craig Biddle →
Letter to the Editor
From the Editor, Fall 2018Jesse McCarthy on Montessori and Independence
Return to Top