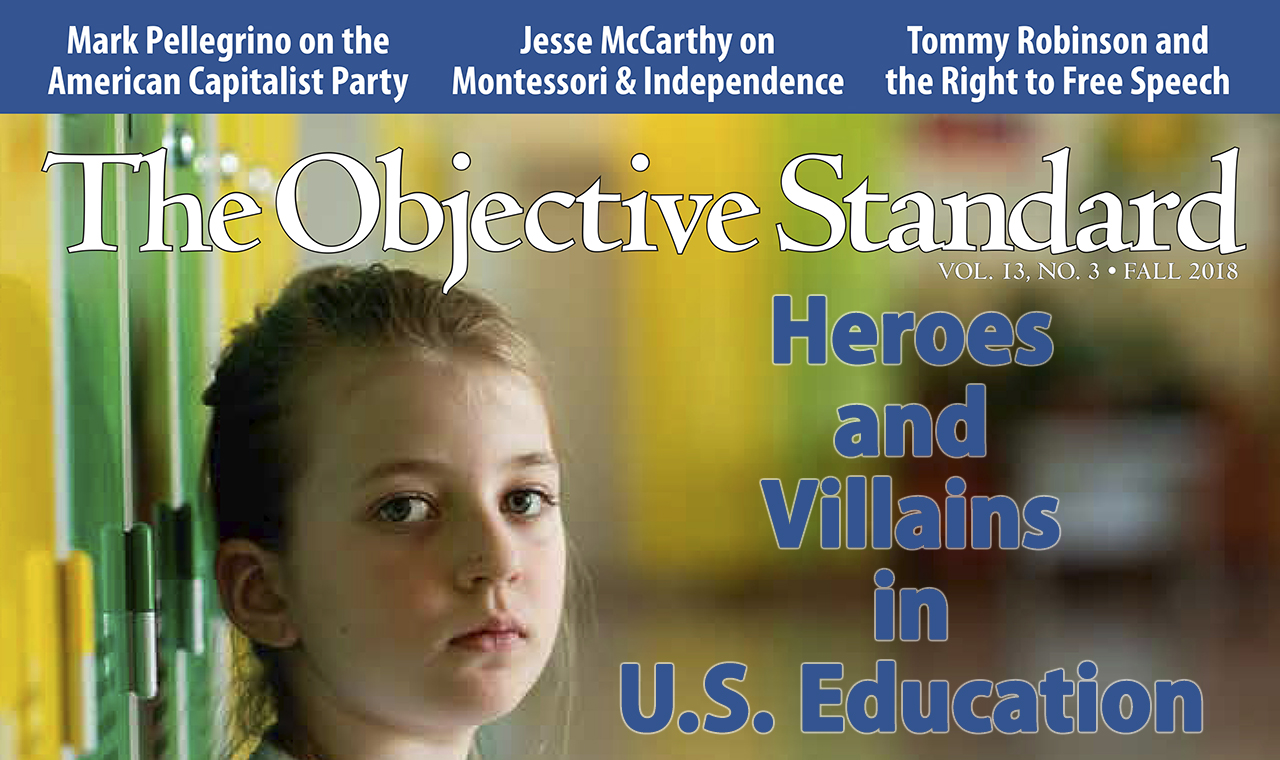 Welcome to the Fall 2018 issue of The Objective Standard.

A few announcements before we get to the contents.

Because TOS-Con begins on August 16, and because we’ll be actively engaged with everyone there, we’re publishing this issue of TOS early. The website and electronic versions will be published Monday, August 13, and the print edition will be mailed shortly thereafter.

I’m delighted to announce that my erstwhile assistant editor, Jon Hersey, has been promoted to associate editor at TOS. Jon has done excellent work since he joined us last fall. He’s written great articles, he’s helped to edit and polish my articles and those of other TOS writers, and he’s worn many hats besides. He earned this promotion in spades. A hearty thank-you and congratulations, Jon!

Now, however, we need a part-time assistant editor. So, if you’re interested in learning how to write and edit TOS-quality articles—and if you have a creative, whatever-it-takes attitude toward helping us grow the business and expand our reach—send Jon an email explaining why you think you’re the right person to join our team. His email is jon@theobjectivestandard.com.

In the lead article, “Heroes and Villains in American Education,” Andrew Bernstein shows that American education is a catastrophe, and he asks “Why?” Noting that “American schools have not always been so bad” and that “at one time American education was superb,” Bernstein proceeds to show just how good American schools were in the past and how they went from good to bad to abysmally bad. Along the way, he identifies the main heroes and villains in this saga and specifies the respective ideas and methods they used to teach or to cripple the minds of children.

This article is heart wrenching. But Bernstein’s exposé and his justice in naming names can help us to begin correcting the situation and saving young minds. After surveying the history, heroes, and villains involved, and after suggesting ways to circumvent the mind-crippling status quo, Bernstein writes,

we must speak out at whatever level is open to us, public or private, among friends or among strangers, in person or online, via Twitter or letters to congressmen. We must champion the mind, intellectual training, and a rigorous academic curriculum. For the sake of justice on behalf of the countless minds already stunted, and to protect countless more, we must tell the bitter truth about the American educational establishment.

If we can save even one priceless mind, it will be worth it. With a concerted effort, we can save many.

Next up is Sarah Biddle’s interview with Jesse McCarthy on Montessori and independence. This discussion dovetails perfectly with Bernstein’s essay, both because Maria Montessori is one of the heroes highlighted therein, and because McCarthy is an expert on her method and on K–12 education in general. McCarthy provides a concise overview of the Montessori method and how it fosters independence by enabling a child to engage in “guided self-creation,” whereby “the child is creating himself and who he is going to be as an adult—and the teacher is his guide.” McCarthy also explains how this method differs from methods used in most schools. Here’s an excerpt:

The main difference is that public schools and many private schools tend to breed dependency, whereas Montessori fosters independence. Think about the core, traditional American education. You sit down, whether at a group desk or individual desk, and the teacher serves up questions. Then you answer them based on what you’ve been taught. The questions are always coming from the adult.

But if you think about young children, they are so full of their own questions. “Why is this? What is that? How does this work?” It’s nonstop. In traditional schooling, the kids are so directed by adults that they don’t have a chance to wonder on their own or think about “What do I like? What don’t I like? How will I spend my time?” They don’t have a chance to direct their own learning or make their own choices about what to do. But they need such skills and experience to truly develop themselves and to function successfully out there in the world.

Next, in “Sequoyah and the Vital Nature of the Written Word,” Timothy Sandefur tells the story of this heroic man, his unswerving independence, his disregard for social pressure, and his remarkable invention of the Cherokee syllabary.

As to why this invention was so important, Sandefur begins:

The skill of language is so precious that philosophers since Aristotle have seen it as the dividing line between humans and animals. But valuable as it is, language evaporates the moment it is uttered—unless it can be preserved in written form. Countless civilizations have risen and fallen with only spoken languages, leaving few clues about their cultures. The Inca deserted Machu Picchu, for example, only a few decades after building it—but due to the lack of written language, no one knows why. The Sinagua peoples of ancient Arizona left behind the ruins of whole towns, but virtually nothing is known of them, or about what archaeologists call The Mississippi Culture, which thrived in an immense territory stretching from the Great Lakes to Florida as recently as the year 1500. Knowledge of these and other societies has been obliterated by time because they left no written record.

That’s just an indication. Sandefur elaborates on the vital nature of written language as he explains how Sequoyah “invented a written form for the language of the largest tribe in America” and how this revolutionized Cherokee culture. If you’re interested in linguistics or epistemology—or if you love stories about perseverance and human ability—you’ll find this article fascinating.

Next is my interview with Mark Pellegrino (yes, Lucifer!) about the American Capitalist Party (ACP) of which he is a founder. With the Republican Party having abandoned any semblance of respect for principle, with the Democratic Party doing its best to pretend that no one has tried “real” socialism, and with the Libertarian Party as committed as ever to ignoring the moral and philosophic foundations of liberty, America needs a new political party. Pellegrino has risen to the occasion.

The ACP is still in the early stages of development. But it has big ideas and a philosophically correct agenda. As Pellegrino explains at some length, the ACP is not merely about politics; it’s also, and more fundamentally, about education. As he puts it:

The ACP aims to educate Americans about the nature of capitalism and the source and meaning of individual rights so that people really understand these values. As more and more Americans come to understand them, they will see that statism does not have the moral high ground. Capitalism does. They’ll see that capitalism is the only moral system because it’s the only system that leaves people free from force so that they can think, produce, trade, and prosper. So that’s our primary purpose: to educate people about the morality of capitalism.

I suspect you’ll want to share this interview with everyone who claims to advocate capitalism—and everyone who doesn’t.

In “The Right to Try, to Hope, to Live,” Christina Sandefur recounts harrowing injustices perpetrated by the FDA in the name of “safety” and highlights a recent and substantial victory against these travesties: the passage of Right to Try legislation. As an indication of the injustices involved, she writes:

Jenn McNary’s sons Austin and Max were diagnosed with Duchenne Muscular Dystrophy—an incurable, fatal muscle disorder. Jenn tried to enroll both boys in a clinical trial for a promising treatment; Max was admitted to the trial, but Austin’s disease had progressed too far, so he did not qualify. Jenn was forced to watch while Max improved under treatment, whereas Austin’s condition worsened until he could no longer dress himself or use the bathroom without help. By the time the FDA allowed Austin into a different trial three years later, his disease had progressed to the point that he was unable to regain the ability to walk.

Sandefur relays a few similar atrocities and notes that thousands of patients “suffer and die every year while treatments that could help them are awaiting the outcome of a slow, bureaucratic federal process—a process that takes, on average, fourteen years.” Fortunately, she continues, State Right to Try laws in recent years have circumvented certain FDA regulations, and their “wide adoption and incredible success . . . created a groundswell of popular support that Washington officials could not ignore.” Consequently, on May 30, 2018, “President Donald Trump signed S.204, the federal Right to Try Act, which protects the right of patients nationwide to seek treatments not yet approved for sale by the FDA.”

As Executive Vice President at the Goldwater Institute, Sandefur played a significant role in achieving this result, and her telling of the story is both horrifying and uplifting. A huge thank-you and congratulations are due to her and her colleagues. They are saving lives. And we can help. Soak in this victory—and share this story.

Finally, in “Tommy Robinson’s Right to Free Speech Morally Trumps All Laws That Violate It. (Even That One.),” I examine the context surrounding Robinson’s May 25 arrest, trial, and conviction; and I zero in on the principles that morally govern the situation. (This story is still developing, and on August 1, Robinson was released on bail pending a new hearing. I’ll write more about his case and the right to free speech in the coming weeks.)

The “shorts” in this issue are:

Books reviewed in this issue are Roger Williams and the Creation of the American Soul: Church, State, and the Birth of Liberty, by John M. Barry (reviewed by Joseph Kellard); and Bad Blood: Secrets and Lies in a Silicon Valley Startup, by John Carreyrou (reviewed by Nicholas Provenzo).

That’s the lineup for this issue of the journal for people of reason. I hope you enjoy the articles, and I’d love to hear any suggestions or criticisms you might have. We’re always striving to improve. —Craig Biddle