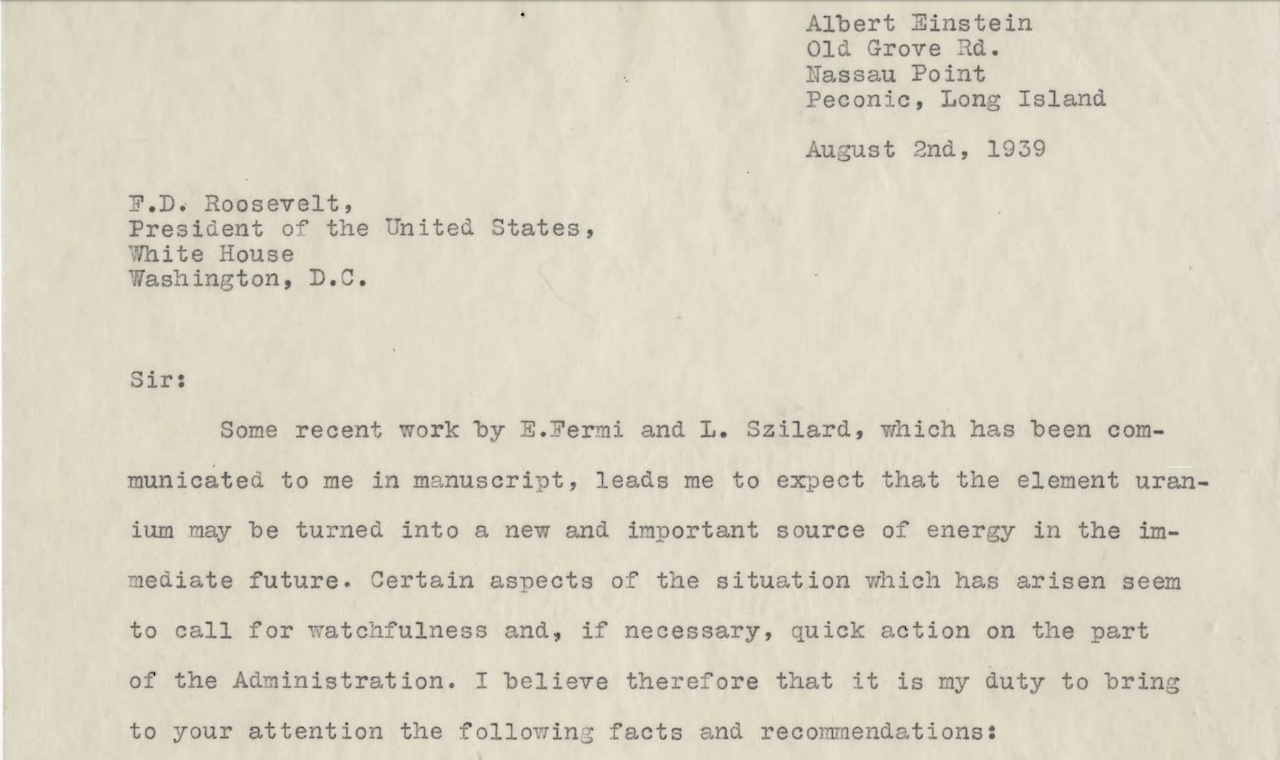 On August 2, 1939, Albert Einstein, a German Jew who fled to America after Hitler came to power, sent President Franklin Delano Roosevelt a letter that would play a critical role in America’s victory in WWII.1 The letter was the idea of fellow expatriate physicist Leó Szilárd, in consultation with Eugene Wigner and Edward Teller, who were concerned that Nazi Germany might soon develop nuclear weapons. Szilárd understood that Einstein, already a world-renowned physicist, would be a compelling emissary for such news. And Einstein, though a lifelong pacifist, understood what atrocities would follow if Germany developed nuclear weapons.

His letter called the president’s attention to scientific work done by Szilárd and Italian immigrant and physicist Enrico Fermi. Their experiments, Einstein explained to FDR, show

that it may be possible to set up a nuclear chain reaction in a large mass of uranium, by which vast amounts of power and large quantities of new radium-like elements would be generated. . . . This new phenomenon would also lead to the construction of bombs, and it is conceivable—though much less certain—that extremely powerful bombs of this type may thus be constructed. A single bomb of this type, carried by boat and exploded in a port, might very well destroy the whole port together with some of the surrounding territory.

Most ominously, at this point Germany had taken over Czechoslovakian uranium ore mines, had recently stopped selling the ore—and physicist Carl Friedrich von Weizsäcker was repeating Szilárd and Fermi’s work in Berlin.

Einstein realized that the invention of nuclear weapons was likely only matter of time and that, when produced, such weapons would decide the fate of the war—and of the world. Despite Einstein’s pacifism, he warned FDR that these developments were reason for “watchfulness and if necessary, quick action on the part of the Administration.”

FDR responded by creating the Advisory Committee on Uranium, which met for the first time in October of that year. Although Einstein declined to participate in the committee, Szilárd, Wigner, and Teller joined. Einstein’s letter set in motion a series of events that brought together these and other remarkable scientists, who helped America win the race to develop nuclear weapons.

Germany surrendered a few months before these weapons were deployed. However, the detonations of “Little Boy” over Hiroshima on August 6, 1945 and “Fat Man” over Nagasaki on August 9, 1945, led to Japan’s unconditional surrender and the end of WWII.

For more on America’s use of these weapons—and the moral reasons for doing so—see “Gifts from Heaven”: The Meaning of the American Victory over Japan, 1945 by John David Lewis.

View all articles by Jon Hersey →
Letter to the Editor
The Passion of SocialistsIdentity Politics vs. the Law of Identity