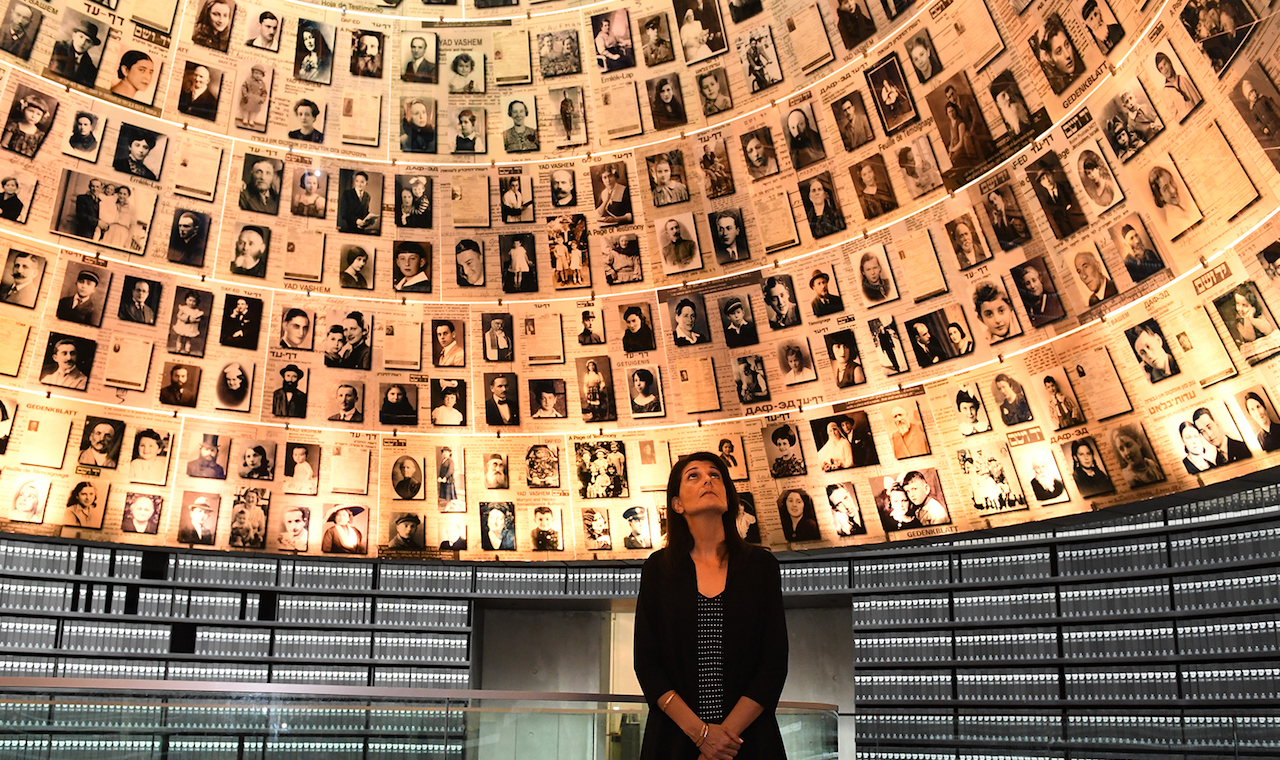 Nikki Haley: Confronting Murderous Regimes and Their Accomplice, the UN

During their announcement that the United States is exiting the United Nations Human Rights Council, Secretary of State Mike Pompeo and Ambassador Nikki Haley explained, with admirable clarity, that associating with murderous regimes emboldens and strengthens them. This principle (which President Donald Trump apparently does not grasp) illuminates the moral imperative that America sever all ties with the United Nations. The Human Rights Council—which supports and shields murderous regimes—does not illustrate an isolated problem within the United Nations, but rather the very nature of that organization.

The council has long demonstrated that nature in microcosm. In 2006, the UN Human Rights Council replaced the UN Commission on Human Rights, which had been widely criticized for allowing countries with atrocious records on individual rights to become members. At the time, UN Secretary General Kofi Annan applauded the replacement council as “a much-needed chance to make a new beginning in its work for human rights around the world.”1

The Human Rights Council, according to its site, “is an inter-governmental body within the United Nations system responsible for strengthening the promotion and protection of human rights around the globe and for addressing situations of human rights violations and [making] recommendations on them.”2 The council consists of representatives from forty-seven countries, as well as an eighteen-member “Advisory Committee which serves as the Council’s ‘think tank’ providing it with expertise and advice on thematic human rights issues.”3

Despite its “new beginning” and stated purpose, the Council has repeated and compounded the failures of its predecessor. As Pompeo puts it, “the Human Rights Council has become an exercise in shameless hypocrisy—with many of the world’s worst human rights abuses going ignored, and some of the world’s most serious offenders sitting on the council itself,” including “authoritarian governments with unambiguous and abhorrent human rights records, such as China, Cuba, and Venezuela.”4

How do these countries strengthen and promote the “protection of human rights around the globe”? Take China to start. The nongovernmental organization, Human Rights Watch, reports:

The broad and sustained offensive on human rights that started after President Xi Jinping took power five years ago showed no sign of abating in 2017. The death of Nobel Peace Prize laureate Liu Xiaobo in a hospital under heavy guard in July highlighted the Chinese government’s deepening contempt for rights.5

In 2017, China’s Communist Party expanded its already dystopian mechanisms for mass surveillance and censorship and “strengthened ideological control over education and mass media.” The party’s Central Commission for Discipline Inspection fired several professors and censured more than a dozen of the country’s top universities for “ideological infractions.” It also jailed pro-democracy lawmakers and student activists and “subjected more human rights defenders—including foreigners—to show trials” in which confessions extracted via torture were used to convict them—then aired as propaganda on state television and social media.6

Yet, China is not only a member of the Human Rights Council; the regime’s representative also sits on the council’s advisory board, presumably providing “expertise and advice on thematic human rights issues.”7

Likewise with Saudi Arabia, a country governed by sharia law. Saudi Arabian women are not allowed to travel or conduct many basic transactions, such as opening a bank account, without the presence of a male overseer. They cannot swim in public, play sports, try on clothes, or choose to wear something other than a loose-fitting cloak (abaya) and headscarf (hijab) in public. Women must use segregated entrances and facilities at offices, banks, parks, and universities—and they must limit interaction with men they’re not related to.8 “Saudi Arabia,” reports Human Rights Watch, “does not tolerate public worship by adherents of religions other than Islam and systematically discriminates against Muslim religious minorities, notably Twelver Shia and Ismailis, including in public education, the justice system, religious freedom, and employment.” Sodomy is punishable by death (customarily by stoning), and the government routinely jails lawyers and activists who advocate rights.9 Yet, Saudi Arabia sits on the advisory board for the UN Human Rights Council.

So do Morocco and Algeria—countries that jail people for criticizing Islam or the government, or for being gay.10

As Human Rights Watch notes, Cuba, which sits not on the advisory board but on the broader Human Rights Council, doesn’t even “recognize human rights monitoring as a legitimate activity and denies legal status to local human rights groups. Government authorities harass, assault, and imprison human rights defenders who attempt to document abuses.” In 2016, Cuban security forces raided the offices of a human rights monitoring organization: “Officers confiscated files, strip-searched four men and a woman, and arrested two attorneys.” The government arrests and detains anyone who dares voice an opinion contrary to that of the regime. The few journalists who manage to operate outside of state-run media are subject to detention and beatings for anything considered dissident. Artists whose works are considered subversive are subject to the same treatment.11

In the smoldering ruins of Venezuela, “President” Nicolás Maduro exercises unchecked power, which he has retained, in part, by jailing his political opponents. The courts are stacked with judges subservient to his will. Venezuelan security forces have killed hundreds of protesters. Human Rights Watch reports, “Security force personnel have shot demonstrators at point-blank range with riot control munitions, run over demonstrators with an armored vehicle, brutally beaten people who offered no resistance, and staged violent raids on apartment buildings.” Yet, Venezuela is a member of the UN Human Rights Council.

In her statement regarding America’s exit from the council, Ambassador Nikki Haley mentioned another recently added country:

In the past year, the Democratic Republic of Congo was elected as a member. The DRC is widely known to have one of the worst human rights records in the world. Even as it was being elected to membership in the Human Rights Council, mass graves continued to be discovered in the Congo.12

Between 2016 and 2017, Congolese security forces—augmented by mercenaries hired from Uganda and Rwanda—drove 1.4 million people from their homes, attacked and destroyed hundreds of schools, and killed as many as five thousand people. Further:

The thirty-six-year-old Ms. Catalán had been decapitated.

According to the United Nations, these regimes are “responsible for strengthening the promotion and protection of human rights around the globe.”14 As Pompeo puts it:

The only thing worse than a council that does almost nothing to protect human rights is a council that covers for human rights abuses and is therefore an obstacle to progress and an impediment to change. The Human Rights Council enables abuses by absolving wrongdoers through silence and falsely condemning those who have committed no offense. A mere look around the world today demonstrates that the council has failed in its stated objectives.15

Muslim countries have banded together, using the veneer of legitimacy granted to them by participation in the UN to pass more sanctions on Israel than on all other countries combined. Haley said, “This disproportionate focus and unending hostility towards Israel is clear proof that the council is motivated by political bias, not by human rights.”16

After more than a year spent trying to reform it, Haley declared that “the United States is officially withdrawing from the UN Human Rights Council.” She added:

In doing so, I want to make it crystal clear that this step is not a retreat from human rights commitments; on the contrary, we take this step because our commitment does not allow us to remain a part of a hypocritical and self-serving organization that makes a mockery of human rights.

Most heartening is Haley’s clear identification of the principle involved:

We didn’t agree with such a moral compromise when the previous UN Human Rights Commission was disbanded in 2006, and we don’t agree with it now. Many of these countries argued that the United States should stay on the Human Rights Council because American participation is the last shred of credibility that the council has. But that is precisely why we must leave. If the Human Rights Council is going to attack countries that uphold human rights and shield countries that abuse human rights, then America should not provide it with any credibility.17

Haley should be lauded for removing the United States from this blood-drenched council and for recognizing that when America associates with murderers and dictators, it lends them credibility and sanctions their evil.

(It appears that Haley could teach President Trump a thing or two about confronting murderous regimes. A week before she and Pompeo announced that America will not provide tyrants “with any credibility,” President Trump did just that, shaking hands, taking pictures, and saying that it was an “honor” to meet with North Korean dictator Kim Jong-un, whom he described as a “a very worthy, very smart negotiator” who “loves his people” and “loves his country very much.” Of course, Jong-un’s repressive regime makes those of China and Venezuela look like guardians of liberty.)

Exiting the council is not enough to end America’s “moral compromise” with regard to the UN. The problems within the Human Rights Council are indicative of the United Nations as such. Many of the same repressive regimes sit on other UN bodies and likewise use the UN’s veneer of credibility to shield themselves from scrutiny. China and Russia, for instance, are permanent members of the UN’s leading organ, the Security Council, which “has primary responsibility, under the UN Charter, for the maintenance of international peace and security.”18

“Moral compromise” between tyrants and the leaders of the free world is the purpose of the UN. It exists in order to uphold the charade that countries such as China and Saudi Arabia are on an equal moral plane with Israel and the United States. It aspires to obfuscate the moral gulf between the ideals of Mao’s“little red book” or sharia law and those of the Declaration of Independence. We can only hope that Haley comes to understand that the principle behind her statements applies equally to the United Nations in toto. Then she would see that America should “not provide [the UN] with any credibility,” and that for the United States to participate in the UN at all is to engage itself in a “moral compromise” and “mockery of human rights.”19

View all articles by Jon Hersey →
Letter to the Editor
Tommy Robinson’s Right to Free Speech Morally Trumps All Laws That Violate It. (Even That One.) — UK VersionHow to apply principles of rational egoism to make your life the best it can be

3. “Welcome to the Human Rights Council.”

7. “Welcome to the Human Rights Council.”

14. “Welcome to the Human Rights Council.”