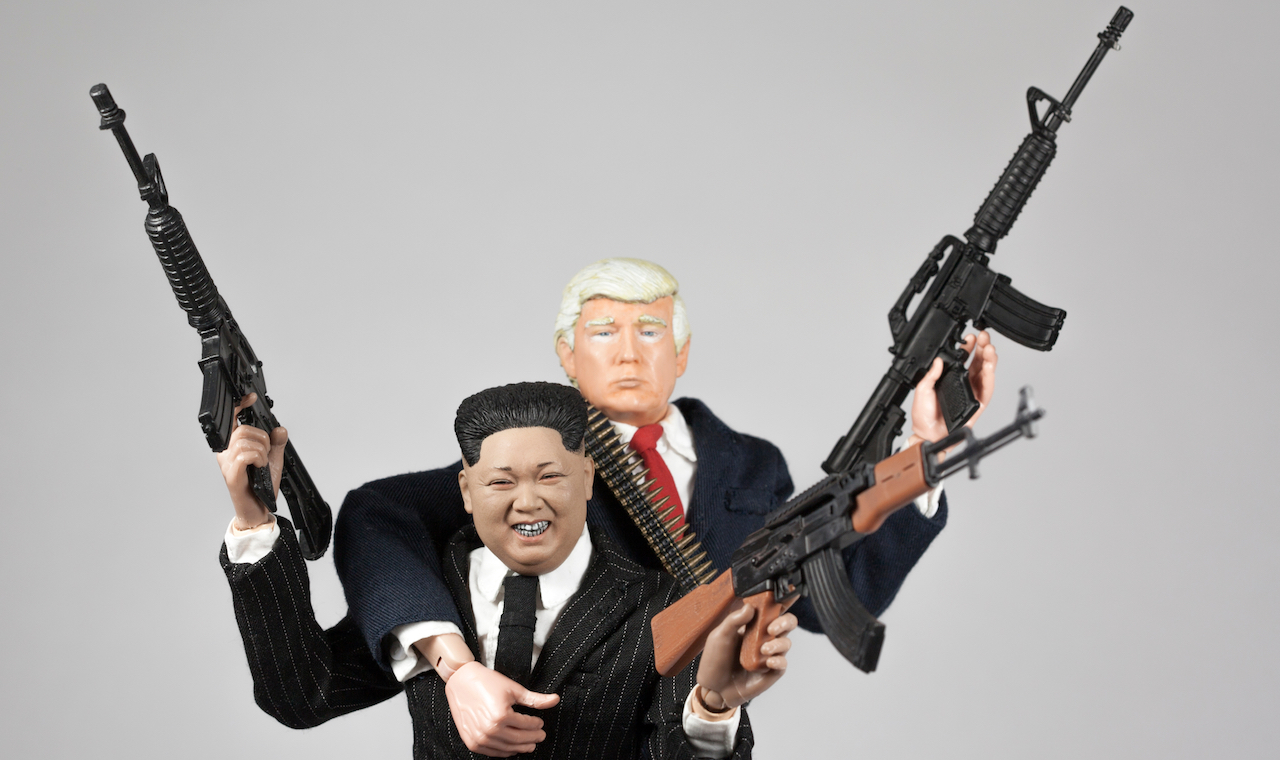 President Trump’s meeting in Singapore last Tuesday with North Korean dictator Kim Jong-un, one of the most vile and murderous sub-animals on the planet, is one of the darkest events in modern history.

Among other atrocities, Jong-un’s regime enslaves the entire population of North Korea, about 25 million people. Anyone who tries to escape is killed—or worse, thrown into a gulag or concentration camp for unimaginable torture.1

Other citizens—men, women, and children—are thrown into such prisons as well for the slightest breach of the dictator’s decrees.2 Estimates are that as many as 200,000 individuals suffer all day, every day in these camps of hell on earth.3

And, of course, Jong-un’s regime regularly launches missiles toward Japan, threatens to launch nuclear missiles at America, and helps the likes of Syria and Iran in their efforts to build nuclear weapons.4

According to Trump, Jong-un has a “great personality,” is “very talented,” and “a very worthy, very smart negotiator” who “loves his people” and “loves his country very much.” (We’ll forgive Jong-un’s people if they haven’t noticed.) In regard to the countless people that Jong-un’s regime has murdered, tortured, and starved to death, Trump said, “Look, he’s doing what he’s seen done” (as if that somehow excuses mass murder, mass torture, and all manner of unspeakable cruelty). It was an “honor” to meet with Jong-un, said Trump. We have “a terrific relationship.”

In short, the president of the country founded on the rights to life, liberty, and the pursuit of happiness met with and fawned over a dictator who peddles in mass murder, unmitigated tyranny, and unfathomable torture.

The only legitimate justification for meeting with a creature such as Jong-un would be either to kill him or to abduct him for political leverage. Under no circumstances is it moral to befriend him or pat him on the back or talk about how very, very impressive he is. (I can hardly believe I’m having to write this.)

Even if this Singapore summit somehow results in “improved” relations between the United States and North Korea or “improved” conditions in Jong-un’s giant torture chamber, it will remain a moral obscenity and a political atrocity.

As Scott Adams (perhaps Trump’s biggest fan) acknowledges, this summit—and, in particular, the Trump administration’s pro-Jong-un propaganda video—portrayed the president of the United States “as an exact equal with chairman Kim.”5

Adams regards that as a good thing. It is not.

What are the consequences of treating Jong-un as an equal to the president of the United States?

Among other consequences are the obliteration of any shred of moral certitude that anyone in North Korea might have had regarding the people of the United States upholding the principle that the people of North Korea have moral rights and thus a moral case against the tyrant who enslaves and tortures them.

Moral certitude on this matter is perhaps the single most important factor enabling people in that hellish slave pen to retain a sense of life in their tortured bodies and souls—or to muster the motivation necessary for a successful revolution.

So, what did Trump say to the people of North Korea when he had an opportunity to speak to them directly? Did he say, “You have inalienable rights to life, liberty, and the pursuit of happiness. Your government has no right to enslave you. Rise up and overthrow this tyrant, Jong-un, and any traitors to life who support him. Rise up and kill them all. This is your moral right and your moral responsibility to yourselves and your loved ones. Free yourselves! Free yourselves, and join the free world so that we all may trade with you and visit your country and invite you to visit ours. Free yourselves so that we all can live as brothers in liberty!”?

Trump said nothing of the sort.

Instead, Trump told the people of North Korea that their leader has a great feeling for them and that what’s really important is chemistry—especially the chemistry between Trump and Jong-un.

Well, I think you have somebody that has a great feeling for them. He wants to do right by them and we got along really well. We had a great chemistry—you understand how I feel about chemistry. It’s very important. I mean, I know people where there is no chemistry no matter what you do you just don’t have it. We had it right from the beginning, I talked about that and I think great things are going to happen for North Korea.6

It’s not merely that you couldn’t make this up. It’s that no one in his right mind would ever want to make it up. This is too depraved even for dystopian fiction.

But there you have it.

As for the notion that this summit and everything Trump said and did surrounding it are just theatrics to warm the cockles of the murderous dictator so as to prep him for manipulation, not a molehill of evidence supports this claim, whereas a mountain of evidence supports the fact that Trump is as depraved as this ordeal, when taken straight, shows him to be.

Jong-un is not the first moral monster Trump has admired and praised. Here’s a brief smattering of Trump’s sordid history on this count:

Nor was it “good” when China’s communist government murdered more than 10,000 people in 1989 during the student-led protests in Tiananmen Square.9 Yet, in March 1990, Trump lauded that communist crackdown as a show of strength in comparison to Mikhail Gorbachev’s relinquishment of state control and his liberalization of the Soviet Union. From Trump’s interview in Playboy:

“Russia is out of control and the leadership knows it. That’s my problem with Gorbachev. Not a firm enough hand,” said Trump.

“You mean firm hand as in China?”, asked the interviewer.

Yes, Trump implied: “When the students poured into Tiananmen Square, the Chinese government almost blew it. Then they were vicious, they were horrible, but they put it down with strength. That shows you the power of strength.”10

Trump has also gushed many times over Vladimir Putin.11 Among these numerous fawnings, in April 2014, Trump praised Putin’s invasion of Crimea:

Well, he’s done an amazing job of taking the mantle. And he’s taken it away from the President, and you look at what he’s doing. And so smart. When you see the riots in a country because they’re hurting the Russians, OK, “We’ll go and take it over.” And he really goes step by step by step, and you have to give him a lot of credit. Interestingly, I own the Miss Universe Pageant. We just left Moscow. He could not have been nicer. He was so nice and so everything. But you have to give him credit that what he’s doing for that country in terms of their world prestige is very strong.12

Likewise, during an interview in February 2017, after Trump expressed his respect for Putin, the interviewer called Putin a killer. Trump retorted, “There are a lot of killers. Do you think our country is so innocent?”13

Given Trump’s track record of admiring and praising murderous tyrants and dictators, it should come as no surprise that he would speak admiringly of Jong-un’s ability to keep his people in check.

Shortly after returning from the Singapore summit, Trump was asked whether he might invite Jong-un to the White House. He replied: “It could happen. I think it’s something that could happen. Hey, he’s the head of a country—and I mean he’s the strong head. Don’t let anyone think anything different. He speaks and his people sit up at attention. I want my people to do the same.”14

Does Trump know why Jong-un’s people sit up at attention when he speaks? Your guess is as good as mine. But neither answer is morally acceptable.

The long-term and wide-range consequences of Trump treating Jong-un as a leader who loves his people and who deserves praise and respect will be enormous and devastating. Exactly how the future will play out in detail, no one can say. What we can say, and know, is that appeasement only emboldens dictators—and that when dictators are emboldened, they wreak even more havoc on human life.

Regardless of what happens in the short term, Trump’s appeasement of this monster will lead to more human suffering, more torture, more starvation, more slaughter. This expansion of human suffering and death might happen in North Korea, or it might not. And we might hear about it, or we might not. But it will happen. It will happen as surely as we live in a causal world.

This is a low point in American history and Western civilization.

How should the United States deal with a problem such as Jong-un’s regime? The only moral purpose of the U.S. government is to protect the lives and rights of Americans. If U.S. intelligence has evidence that the regime poses a serious threat to Americans, then our military should eliminate that threat immediately and by any means necessary. If the regime is not a threat to Americans, then our government should implement and sustain all possible sanctions on North Korea until the regime collapses, or is overthrown, or becomes a threat warranting immediate destruction.

As for how Americans should deal with the problem of Trump and the unprincipled, pragmatic, amoral approach to politics that he represents: We must come to understand the objective foundations of morality and rights. We must advance these principles in the culture at large. We must embrace a political ideology that is anchored in these truths.15 And we must never cede an inch to the notion that morality or principle are irrelevant in politics. Morality and principle are essential to the politics of freedom. And politicians such as Trump, politicians who reject morality and principle, are enemies of freedom and thus enemies of human life.

View all articles by Craig Biddle →
Judge Leon Heroically Sets Rational Precedent on AntitrustTommy Robinson’s Right to Free Speech Morally Trumps All Laws That Violate It. (Even That One.) — UK Version