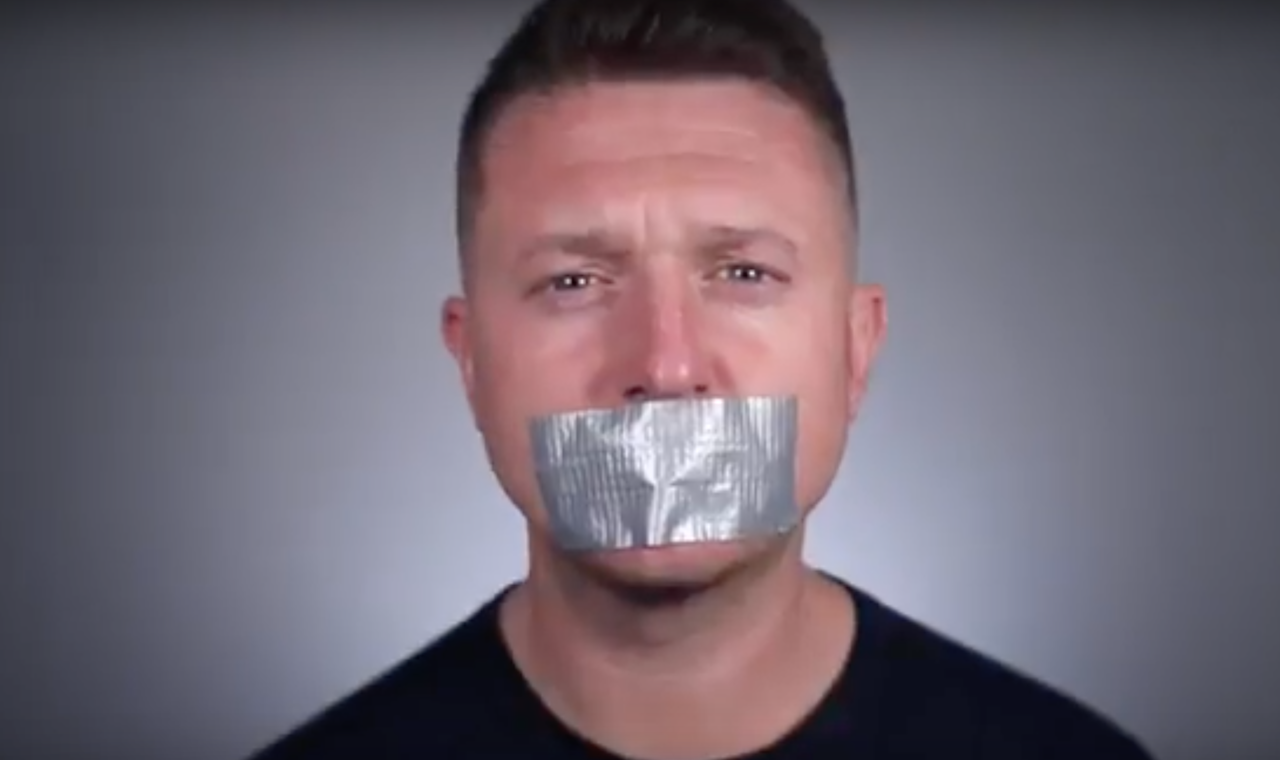 The Horrific Injustice against Tommy Robinson and Free Speech

Tommy Robinson, a British activist who vocally opposes jihad and mass Islamic immigration into Europe, was arrested last Friday for “breaching the peace” after livestreaming outside a Leeds courthouse and reading aloud the charges against several alleged members of a Muslim rape gang. As an indication of the “violent” nature of Robinson’s reporting, the most heated moment was when he asked a few of the accused Muslims, “How do you feel about your verdict?” as they made their way into the courthouse.

The court defended Robinson’s arrest by claiming that he violated a “reporting restriction” on the Muslim rape gang case. Yet, Robinson had only repeated what another UK newspaper had already printed.1 Clearly, this was mere pretense for jailing an outspoken critic of Islam and unrestricted Muslim immigration.

The UK government did not initially silence only Robinson. A judge ordered the media not to report on details of his arrest or the charges against him until after the rape gang case concluded. Fortunately, this restriction was lifted after four days, thanks to the arguments of two media outlets—which subsequently revealed that Robinson has been sentenced to thirteen months in prison for contempt of court.2

How could a modern, Western nation throw a man in jail for speaking his mind? Unbeknownst to many Americans, the UK has long restricted speech in ways that make this incident unsurprising—especially speech critical of Islam. For critiques of “the religion of peace,” the UK has banned a slew of commentators, journalists, activists, and politicians—including Robert Spencer, Pamela Gellar, Geert Wilders, Lauren Southern, and Martin Sellner—from entering the country.3

Now, the government has caged Tommy Robinson—apparently because his outspoken criticism of mass Islamic immigration into Europe has persuaded many in the UK to side with his calls for immigration restrictions. This is not the first time Robinson has been arrested for exercising his right to speak. He was previously jailed after publicly criticizing the Islamic State of Iraq and the Levant.

If Robinson is forced to serve his thirteen-month term, he likely will not make it out alive. Once, when jailed for an unrelated charge, he was trapped in a room with eight Muslims who brutalized him and knocked out all his front teeth. According to the Spectator, “The only reason he didn’t die, he says, is because they didn’t have any ‘shivs’ (bladed weapons).”4 If his present jail term leads to his death, those responsible for caging him with violent brutes will have blood on their hands. Perhaps, opponents of free speech would be indifferent to such a genuine crime. They may indeed welcome such a fate as a warning to those who dare to speak their minds.

By silencing and jailing Robinson, the UK government has perpetrated a horrific injustice. Whatever you think of Robinson, his ideas, or his tactics, all freedom-loving individuals must condemn this perversion of power and stand beside Robinson during his fight for freedom of speech, freedom of the press, freedom to live.

You can donate to Tommy Robinson’s legal fund here.

Peter Seferian is an undergraduate student at St. Edwards University, where he studies philosophy. His primary interests are foreign policy and economics. He cites Ayn Rand as one of his main intellectual influences.

View all articles by Peter Seferian →
From the Editor, Summer 2018A Report on ‘The Moral Foundations of Capitalism’

3. Gareth Davies, “Canadian Far-Right Activist Becomes Third Person to Be Barred from Britain in 72 Hours for Anti-Muslim Views after Austrian and His American Girlfriend Are Deported over Plans to Speak at Hyde Park,” Daily Mail, March12, 2018, http://www.dailymail.co.uk/news/article-5493105/Journalist-anti-Muslim-activist-barred-Britain.html.