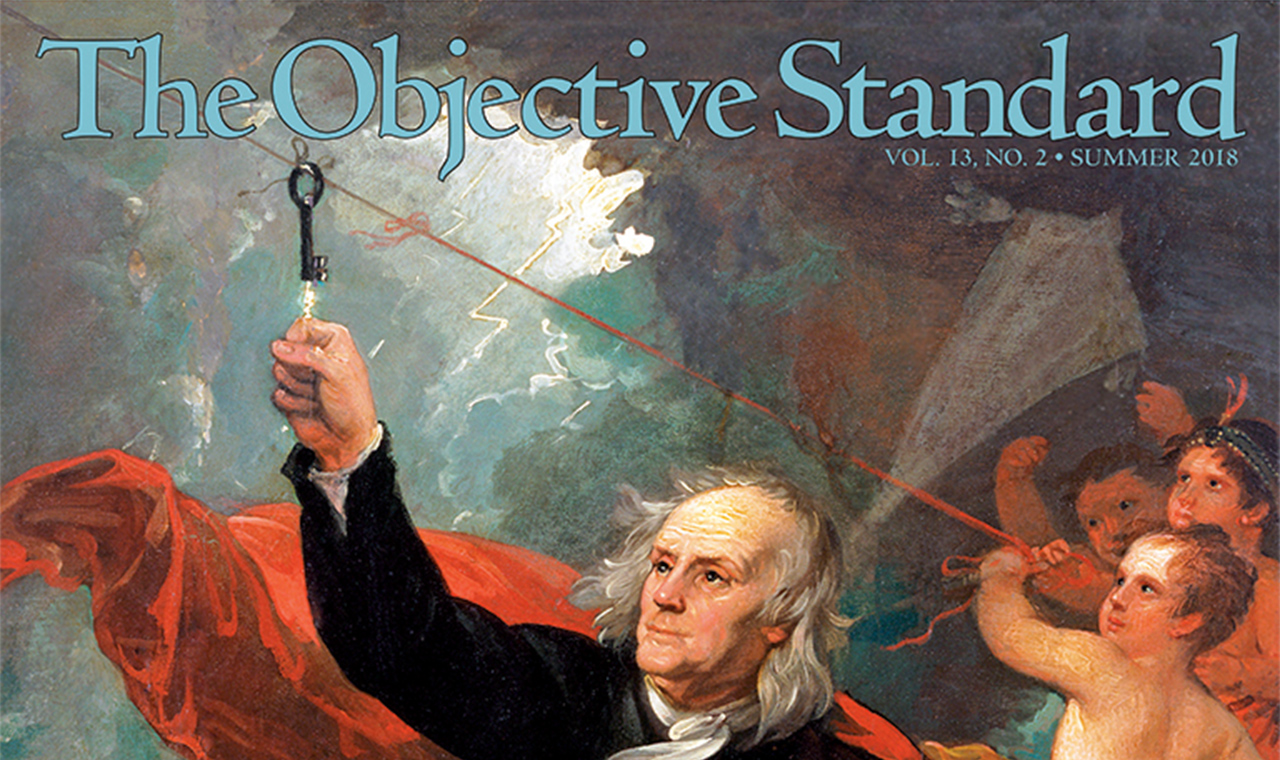 Welcome to the Summer 2018 issue of The Objective Standard.

While the value of the Enlightenment is being hotly debated by today’s intellectuals (some regard it as a negative development), taking a tightly essentialized deep dive into how the ideas of the era were embraced, advanced, and put into practice by one of its greatest representatives is simply sublime. Read “Benjamin Franklin: The Enlightenment Personified,” by Jon Hersey. You’ll not only be enlightened. You’ll be inspired.

Next up is “Principles of the Liberal Right,” in which I unify vital ideas from classical liberalism and the American right into an ideology of reason, freedom, and flourishing.

In “The Genius of James Madison,” Timothy Sandefur shows why Madison’s work in forging the tools and marshaling the principles necessary to establish a free country justifies the appellation he was too modest to accept: Father of the Constitution.

In “Henry Hazlitt in One Lesson,” Tom Malone shows that the man most famous for his wonderful book Economics in One Lesson is himself worthy of such focus.

Next, in “John Lautner and Real Architecture,” Betsy Speicher shows why Frank Lloyd Wright called Lautner “the world’s second-best architect.” Lautner has been compared to Howard Roark from Ayn Rand’s novel The Fountainhead, and Speicher tells an interesting story around that connection in the piece.

In my interview with Tal Tsfany, he discusses his new and delightful book Sophie, including the genesis of the story and his thought processes while writing and editing the manuscript. (Sophie is reviewed in this issue as well.)

Our section of shorts (articles shorter than fifteen hundred words) includes: “‘Act Worthy of Yourselves’: Joseph Warren on Defending Liberty,” by Tom Malone; “Hamilton’s Bank of New York Put the City Back in Business and the U.S. on the Map,” Robert Begley; “Free Speech, Property, and the Right to Discriminate,” by Ryan Puzycki; “Jackie Robinson: ‘The Best Kind of American Hero,’” by Robert Begley; and “‘No Man Swings More or Stands Higher Than the Duke,’” also by Begley.

The books reviewed in this issue are The Big Lie: Exposing the Nazi Roots of the American Left, by Dinesh D’Souza (reviewed by Tom Malone); and Sophie, by Tal Tsfany (reviewed by Ella Wilson).

I hope you enjoy the Summer 2018 issue and your summer in general. And I’d love to hear what you think about this issue of the journal. You can reach me directly at cbiddle@TheObjectiveStandard.com.