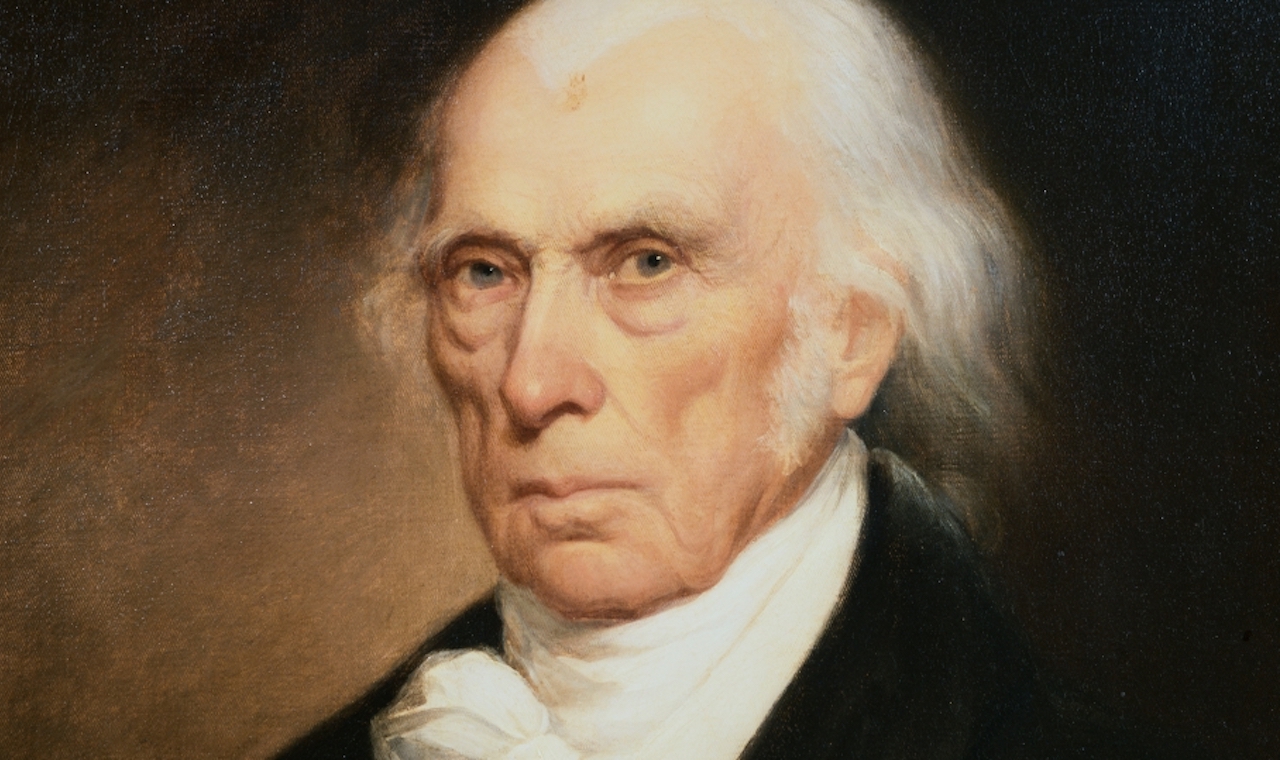 The Genius of James Madison

Of all of the political thinkers in human history, few—perhaps none—so effectively have combined a sophisticated understanding of political philosophy with the practical skills of a politician as James Madison, the short, shy, scholarly Virginian known today as the Father of the Constitution. More than any other member of the founding generation, Madison grasped abstract principles of political theory—in some cases revising or challenging them with his own keen insights. And he successfully incorporated those principles and his improvements into the fundamental laws of the United States. Yet only now are most Americans coming to appreciate his legacy.

Madison was born in 1751 on a Virginia plantation that he later named Montpelier after a French city he never visited.1 He was one of ten siblings, so although he never fathered children of his own, he was surrounded in old age by plenty of nieces and nephews. He was given the education expected for the upper class—Latin, Greek, classical history, religion, and mathematics. But in a break with tradition, he attended college not at William and Mary in Williamsburg, but at the College of New Jersey—later Princeton—275 miles north. He was an attentive student but apparently not tediously so. Unlike his later friend, Thomas Jefferson, who was said to have kept at his books so intensely that it annoyed his friends, Madison gained a reputation for a ribald sense of humor.

He was attuned, however, to the controversies of the day, and among his earliest letters is a commentary on the subject that would always be closest to his heart: religious freedom. In 1774, he described to a classmate the persecution of Baptists by the Anglican establishment of Virginia. “That diabolical, hell-conceived principle of persecution rages,” he complained. “This vexes me the most of anything whatever.”2 And he hinted at what would become a theme of his later political thought: Persecution was more likely in a country where a single sect enjoyed monopoly power. “Union of religious sentiments begets a surprising confidence,” he wrote. “If the Church of England had been the established and general religion in all the northern colonies as it has been among us here [in Virginia] . . . it is clear to me that [intellectual] slavery and subjection might and would have been gradually insinuated.”3 . . .

1. Only Madison ever tried to spell its name correctly as Montpellier. His contemporaries almost immediately dropped the second “l,” and later he did, too.

2. Madison to William Bradford, January 24, 1774, in James Madison: Writings, edited by Jack Rakove (New York: Library of America 1999), 7. The spelling and punctuation of all quotations have been modernized throughout.

5. “Federalist No. 51,” in The Federalist, edited by J. Cooke (Middletown, CT: Wesleyan University Press, 1961), 348. This quotation sometimes is misrepresented to suggest that Madison believed government should ensure that citizens behave morally. See H. Jefferson Powell, The Moral Tradition of American Constitutionalism: A Theological Interpretation (Durham, NC: Duke University Press, 1993), 58. In fact, Madison essentially was arguing the opposite: that because people are fallible, they cannot be trusted with power to govern the choices of other people.

8. Madison never was confirmed in the Anglican church, rarely attended religious services, and so rarely spoke in religious terms that scholars have classified him as at most a “modest Deist.” David L. Holmes, The Faiths of the Founding Fathers (Oxford: Oxford University Press, 2006), ch. 9. Yet whereas Jefferson positively defended deism on account of the “argument from design,” Madison did not even do that. Lynne Cheney, James Madison: A Life Reconsidered (New York: Penguin, 2014), 40–43.

10. This was included in the proposed Bill of Rights that Madison introduced in Congress on June 8, 1798. It was not approved. See Marvin Meyers, ed., The Mind of the Founder: Sources of the Political Thought of James Madison (Hanover, NH: Brandeis University Press, rev. ed., 1981), 166.

17. Jefferson to Madison, September 6, 1789, in Thomas Jefferson: Writings, edited by Merrill Peterson (New York: Library of America, 1984), 959. “Usufruct” is an obsolete legal term referring to a life-estate. In other words, the living generation owns the planet but has no right to destroy it or otherwise render it uninhabitable to those who will inherit it. The argument that the earth belongs to the living was certainly not new. See Herbert Sloan, “The Earth Belongs in Usufruct to the Living,” in Jeffersonian Legacies, edited by Peter Onuf (Charlottesville: University Press of Virginia, 1993), 281–315. It is found in Lucretius’s De Rerum Natura, book 3, lines 974–75. Lucretius writes, “in fee-simple life is given to none, / But unto all mere usufruct.”

23. Another example is found in “Federalist No. 49,” in which Madison lays out his disagreement with a proposal Jefferson advanced in his book Notes on the State of Virginia.

24. A Bill for Establishing Religious Freedom, in Jefferson: Writings, 346–48.

25. Memorial and Remonstrance, in Madison: Writings, 30.

31. Madison to Jefferson, September 6, 1787, in Madison: Writings, 136 (“I hazard an opinion . . . that the plan should it be adopted will neither effectually answer its national object nor prevent the local mischiefs which everywhere excite disgusts against the state governments.”)

32. Madison, Vices of the Political System of the U. States, in Writings, 74.

43. Jefferson, draft of the Kentucky Resolutions, in Jefferson: Writings, 453.

56. William Lee Miller, The Business of May Next (Charlottesville: University of Virginia Press, 1993), ch. 12.

62. Madison did become president of the American Colonization Society, an antislavery organization that sought to couple emancipation with sending former slaves to colonies in Africa. Yet, as Frederick Douglass would point out shortly afterward, this approach essentially reinforced the popular prejudice that black Americans could not live freely in the United States. And because colonization was not practicable—the annual increase in the slave population vastly exceeded the number of slaves successfully colonized—the whole concept of colonization served as a handy excuse for delaying emancipation indefinitely. Douglass to Benjamin Coates, April 17, 1856, in Philip Foner, ed., Life and Writings of Frederick Douglass (New York: International Publishers, 1950), vol. 2, 387–88.

68. Madison scorned the Rousseauian notion of the “general will.” Ketcham, James Madison, 298–99. Likewise, he had little patience for early versions of socialism. Drew McCoy, The Last of the Fathers: James Madison and the Republican Legacy (Cambridge: Cambridge University Press, 1989), 204–8.

70. Madison’s primary concern was that in attempting to list individual rights, such a bill naturally would give rise to the implication that anything left off the list was purposely excluded from legal protection. Hamilton advanced the same argument in “Federalist No. 84,” as did many other framers. Madison hoped to solve this problem by writing what became the Ninth Amendment, which forbids such an interpretation of the Bill of Rights. Speech of June 8, 1789, in Madison: Writings, 448–49.

71. Richard Labunski, James Madison and the Struggle for the Bill of Rights (Oxford: Oxford University Press, 2006).

73. The best popular account is Walter Lord, The Dawn’s Early Light (Baltimore: Johns Hopkins University Press, 1994). Lord and other biographers particularly fault Madison for failing to dismiss Secretary of War John Armstrong in time to ensure effective defense at the Battle of Bladensburg, which led to the British taking Washington, D.C.

76. McCoy’s Last of the Fathers provides a superb account of Madison’s post-presidency and is essential reading for any Madison student.

77. Saul Padover’s The Complete Madison (New York: Harper, 1953) is the exception that proves the rule. Notwithstanding its title, the book consists of brief paragraph-size quotations from Madison’s writings, many heavily elided. Not until Myers’s Mind of the Founder appeared in 1981 did students have an alternative. Recent years have seen a flourishing of affordable, skillfully edited alternatives.

79. Lance Banning, The Sacred Fire of Liberty: James Madison and the Founding of the American Republic (Ithaca, NY: Cornell University Press, 1998); and Gary Rosen, American Compact: James Madison and the Problem of Founding (Lawrence: University Press of Kansas, 1999). Ketcham’s and Rutland’s biographies are superb—particularly Ketcham’s, but even at nearly eight hundred pages, by necessity it omits significant portions of Madison’s busy life.