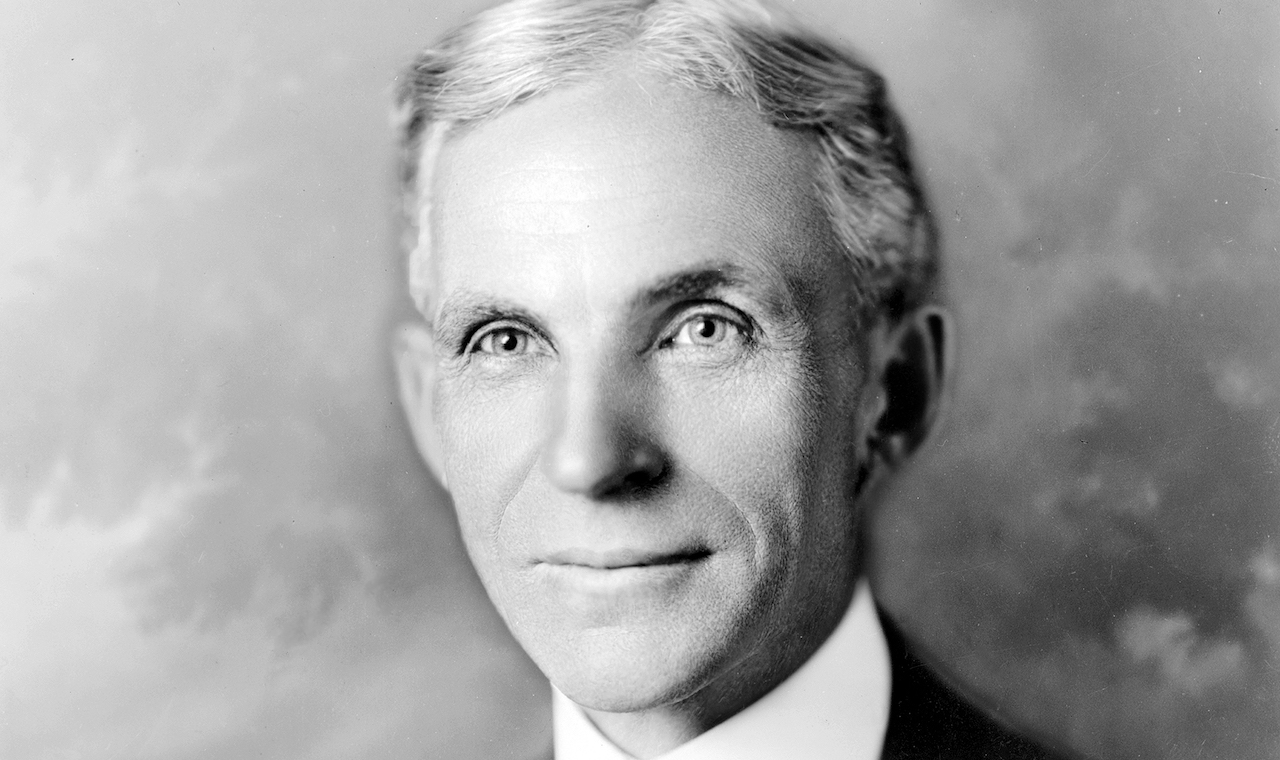 Henry Ford on the Justice of Income Inequality

Editor's note: Although Henry Ford was anti-Semitic, and although that is a vile and inexcusable position—as are all forms of collectivism—this article is not about Ford's immoral views on Jews. It is about his views on income inequality, some of which were quite good. Many people who have done or said good things in one area of life have done or said bad things in others. When an article in TOS focuses on one aspect of someone's life, this does not mean that we are unaware of other aspects or that we embrace them or that we regard them as unimportant. Rather, it means that we do not regard the person's other actions or views as relevant to the subject at hand.

We hear a lot about income inequality today. Bernie Sanders nearly displaced the established democrat, Hillary Clinton, in the 2016 presidential primaries by being the more vociferous opponent of income inequality. Scores of economists—armed with charts and graphs—argue that rising inequality will lead to the breakdown of society. In their article “The Unmet Promise of Equality,” Fred Harris and Alan Curtis write, “Today, the top 1 percent receive 52 percent of all new income. Rich people are healthier and live longer. They get a better education, which produces greater gains in income.”1 In his article “Income Inequality in the U.S. Is Even Worse Than You've Been Led to Believe,” Alex Henderson writes, “Although the U.S. remains the largest economy in the world, it is hardly the most inclusive. While Wall Street and Silicon Valley are thriving, OECD data indicate we not only suffer from harsh inequality but some of the highest rates of poverty in the developed world.”2

Although income inequality is pitched as a modern and escalating problem requiring new regulations and redistributive measures, the genius of industrial manufacturing, Henry Ford, understood the factors that determine a man’s income, or lack thereof, as far back as 1922. He also saw through the nonsense of those who claimed that all should earn equal pay. A glance out on his factory floor revealed the natural basis of income inequality.

There can be no greater absurdity and no greater disservice to humanity in general than to insist that all men are equal. Most certainly all men are not equal, and any democratic conception which strives to make men equal is only an effort to block progress. Men cannot be of equal service. The men of larger ability are less numerous than the men of smaller ability; it is possible for a mass of the smaller men to pull the larger ones down—but in so doing they pull themselves down. It is the larger men who give the leadership to the community and enable the smaller men to live with less effort.⁠3

According to Ford, a man’s income is a matter of justice. He said that if a man “contributes nothing he should take away nothing. He should have the freedom of starvation.”4 “Exact social justice,” he added, “flows only out of honest work. The man who contributes much should take away much.”5

Thus, Ford held, “The natural thing to do is to work—to recognize that prosperity and happiness can be obtained only through honest effort.”⁠6

Ford understood the connection between a man’s work and his prosperity as well as anyone. Reflecting on his international manufacturing and distribution operation, on the vocational school he founded, on the hospital he built, and on the railroad he turned from a bankrupt line to a profitable enterprise, he said, “All that we have done comes as the result of a certain insistence that since we must work it is better to work intelligently and forehandedly; that the better we do our work the better off we shall be. All of which I conceive to be merely elemental common sense.”⁠7

Ford likened the differing levels of prosperity among men to the differences in power among machines:

I cannot pretend to say, because I do not know, whether the man who works always, who never leaves his business, who is absolutely intent upon getting ahead, and who therefore does get ahead—is happier than the man who keeps office hours, both for his brain and his hands. It is not necessary for any one to decide the question. A ten-horsepower engine will not pull as much as a twenty. The man who keeps brain office hours limits his horsepower. If he is satisfied to pull only the load that he has, well and good, that is his affair—but he must not complain if another who has increased his horsepower pulls more than he does. Leisure and work bring different results. If a man wants leisure and gets it—then he has no cause to complain. But he cannot have both leisure and the results of work.⁠8

Ford added that injustice is not made just by spreading it equally to all. “We are not getting anywhere when we insist that every man ought to have more than he deserves to have—just because some do get more than they deserve to have.”9

“The moral fundamental,” according to Ford, “is man's right in his labour.” He continued:

This is variously stated. It is sometimes called “the right of property.” It is sometimes masked in the command, “Thou shalt not steal.” It is the other man’s right in his property that makes stealing a crime. When a man has earned his bread, he has a right to that bread.⁠10

Ford was born into an America in which this view of rights and its underlying ethic of self-reliance were on the decline. Self-proclaimed “progressives” (i.e., leftists) of the time argued for an entitlement state in which one man’s bread would be given to another man who had not earned it. Ford protested.

As long as we look to legislation to cure poverty or to abolish special privilege we are going to see poverty spread and special privilege grow. We have had enough of looking to Washington and we have had enough of legislators—not so much, however, in this as in other countries—promising laws to do that which laws cannot do. When you get a whole country—as did ours—thinking that Washington is a sort of heaven and behind its clouds dwell omniscience and omnipotence, you are educating that country into a dependent state of mind which augurs ill for the future. Our help does not come from Washington, but from ourselves.⁠11

He realized that “The exploitation of dissatisfaction is an established business to-day. Its object is not to settle anything, nor to get anything done, but to keep dissatisfaction in existence. And the instruments used to do this are a whole set of false theories and promises which can never be fulfilled as long as the earth remains what it is.”⁠12

Yet, Ford lived to see several European countries forge ahead and attempt to make the world what it was not.

They actually managed to start a new world in Russia. It is there that the work of the world makers can best be studied. We learn from Russia that it is the minority and not the majority who determine destructive action. We learn also that while men may decree social laws in conflict with natural laws, Nature vetoes those laws more ruthlessly than did the Czars. Nature has vetoed the whole Soviet Republic. For it sought to deny nature. It denied above all else the right to the fruits of labour. Some people say, “Russia will have to go to work,” but that does not describe the case. The fact is that poor Russia is at work, but her work counts for nothing. It is not free work. In the United States a workman works eight hours a day; in Russia, he works twelve to fourteen. In the United States, if a workman wishes to lay off a day or a week, and is able to afford it, there is nothing to prevent him. In Russia, under Sovietism, the workman goes to work whether he wants to or not. The freedom of the citizen has disappeared in the discipline of a prison-like monotony in which all are treated alike. That is slavery. Freedom is the right to work a decent length of time and to get a decent living for doing so; to be able to arrange the little personal details of one's own life.⁠13

Ford’s observations on inequality, both in his own shops and in the world at large, integrated seamlessly. And to him the effects of redistribution efforts were obvious.

Any plan which starts with the assumption that men are or ought to be equal is unnatural and therefore unworkable. There can be no feasible or desirable process of leveling down. Such a course only promotes poverty by making it universal instead of exceptional. Forcing the efficient producer to become inefficient does not make the inefficient producer more efficient.⁠14

In Ford’s view, the inequality narrative was a lot of hot air, and his life’s work swept it away.

Poverty cannot be abolished by formula; it can be abolished only by hard and intelligent work. We are, in effect, an experimental station to prove a principle. That we do make money is only further proof that we are right. For that is a species of argument that establishes itself without words.15

2. Alex Henderson, “Income Inequality in the U.S. Is Even Worse Than You've Been Led to Believe,” Alternet.org, March 6, 2018, https://www.alternet.org/news-amp-politics/income-inequality-us-even-worse-youve-been-led-believe.