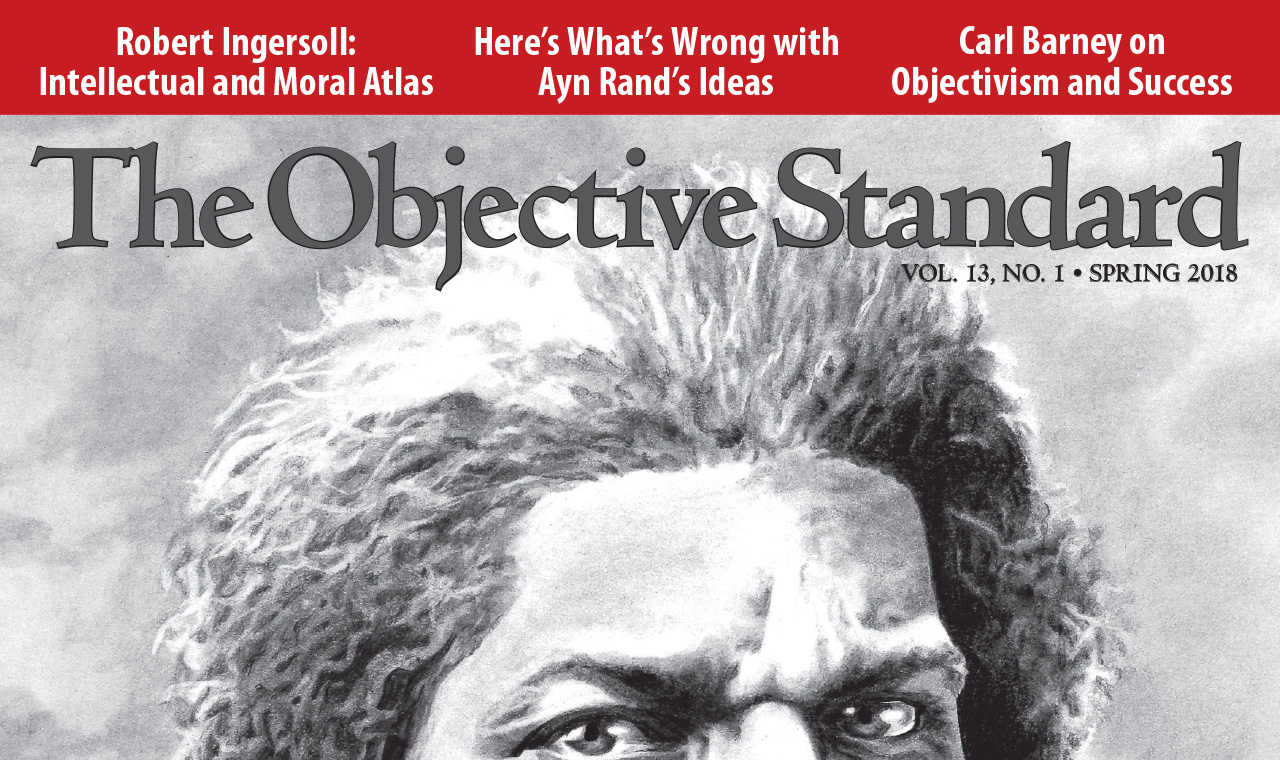 Welcome to the Spring 2018 issue of The Objective Standard.

This month marks the bicentennial of Frederick Douglass’s birth, and we are delighted to celebrate the occasion with a tribute to this great-souled, self-made man.

Big thank-yous to Pete Masterson for the cover design and layout, and to Elizabeth Scism for the stunning portrait of Douglass. (Prints of the portrait are available via Fine Art America; search: Elizabeth Scism.)

First up is “Frederick Douglass’s Vision of Manhood,” by Timothy Sandefur, which examines the development of Douglass’s view of what, in principle, an individual must do in order to live as a free, independent human being.

Next is Douglass’s own essay, “Self-Made Men,” which he delivered as a speech more than fifty times in his later years of life. Here, Douglass focuses on the nature and characteristics of “men who owe little or nothing to birth, relationship, friendly surroundings; to wealth inherited or to early approved means of education; who are what they are, without the aid of any favoring conditions by which other men usually rise in the world and achieve great results. . . . who are not brought up but who are obliged to come up . . . often in open and derisive defiance of all the efforts of society and the tendency of circumstances to repress, retard and keep them down.” Who are examples of such men? What qualities of character enable them to succeed? What can you learn from them? Read the essay and see.

One man whom Douglass held in the highest esteem was Robert Ingersoll, and these two moral giants once met in person. For that story—and for a concise introduction to the astonishing life and ideas of Ingersoll—see Tom Malone’s essay, “Robert Ingersoll: Intellectual and Moral Atlas.” If you don’t know much about Ingersoll, you’re in for a profound surprise. If you are familiar with his life and ideas, you’ll enjoy this beautifully condensed journalistic portrait of this great man. Either way, your view of the universe will become more benevolent.

Then, when you read my interview with Carl Barney, it will become even more so.

In “Carl Barney on Objectivism and Success,” Barney discusses the ways in which Ayn Rand’s philosophy has enabled him to create “heaven on earth” in his life—and to advance Rand’s philosophy in myriad ways across the globe so that other people can learn these vital ideas, put them to work in their own lives, and create their own heavens here and now. This interview may be one of the best condensations you’ll ever read of the practical significance of Objectivism.

Ironically, next up is my essay, “Here’s What’s Wrong with Ayn Rand’s Philosophy,” which is a tongue-in-cheek examination of the “problems” with Rand’s ideas—from her fundamental view of reality, to her conception of man’s means of knowledge, to her theory of free will, to her views on morality, good living, individual rights, and the proper purpose of government. As I explain at the opening, “Many articles have been written about what’s wrong with Ayn Rand’s philosophy. But, to my knowledge, none of them presents her ideas accurately. So I thought it would be helpful to write one that does.”

In “Live Free or Die: The Story of General John Stark,” Jon Hersey examines the remarkable character and actions of this great general who “played a tremendous role in winning America’s independence,” yet “is virtually unknown today.” Also by Hersey is “The Boston Tea Party’s Principles and Heroes,” which tells of the day “when Boston patriots sent a clear message to the British Parliament and King George III that the American colonists would not passively tolerate ‘taxation without representation.’” The message? “. . . so large a cup of tea for the fishes.”

From love of freedom we transition to love of romance, with a collection of “Nine Beautiful Poems on Romantic Love”—including works by William Shakespeare, John Keats, Lord Byron, Robert Burns, and Emily Dickinson. If you missed this collection on Valentine’s Day or haven’t read it yet, make time to indulge.

Our section of shorts (articles shorter than fifteen hundred words) includes: “‘It Was Time for Every Man to Stir’: Thomas Paine’s Common Sense,” by Jon Hersey; “The Supreme Court’s Opportunity to Legalize Privacy,” by Amy Peikoff; “Contra Ben Shapiro, Rational Self-Interest Is Not Hedonism,” by me; “Don’t Draft Women, Don’t Draft Anyone,” by Mike Cronin; “Don’t Thank Producers for ‘Giving Back’—Just Thank Them for Producing and Giving,” by Jake Hanley; “‘Shithole Countries,’ Moral Ambitiousness, and Economic Parallels,” by me; “Altruism on Parade: Unity in the ‘March for Life’ and the Women’s March,” by Ryan Puzycki; and “Alma Deutscher the First,” by Betsy Speicher.

The books reviewed in this issue are On Writing Well: The Classic Guide to Writing Nonfiction, 7th ed., by William Zinsser; and RooseveltCare: How Social Security Is Sabotaging the Land of Self-Reliance, by Don Watkins (both reviewed by Jon Hersey).

I hope you enjoy the Spring 2018 issue. Let us know what you think, as we’re always striving to improve.