RooseveltCare: How Social Security Is Sabotaging the Land of Self-Reliance by Don Watkins - The Objective Standard 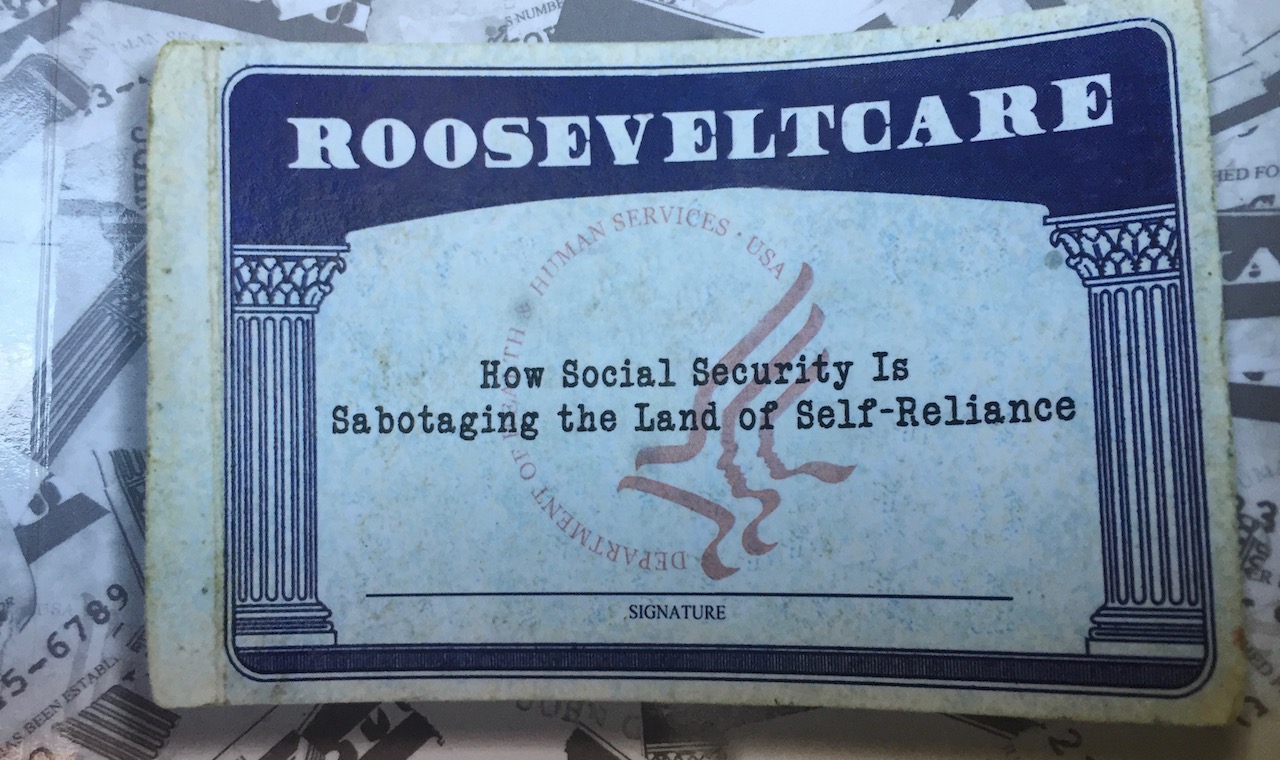 RooseveltCare: How Social Security Is Sabotaging the Land of Self-Reliance by Don Watkins

RooseveltCare by Don Watkins, is a masterfully essentialized history of the American entitlement state and an alluring portrayal of the “self-reliant society” that it replaced. Most importantly, this account of How Social Security Is Sabotaging the Land of Self-Reliance is a compelling moral case for phasing out entitlement programs and for restoring the ethic of self-reliance that animated Americans during the country’s first 150 years. RooseveltCare not only illustrates the nuts and bolts of the impending debt crisis, it also clarifies the moral premises and corresponding policies that gave rise to the problem in the first place.

Though Watkins has co-authored several books championing free enterprise, RooseveltCare (published in 2014) is his first solo effort. The author’s straightforward style and the book’s main text of only 113 pages make it a quick and captivating read. Even in that short span, the book penetrates to fundamentals, expresses ideas clearly, and integrates a surprising amount of information. For instance, Watkins writes:

America was born out of the Enlightenment, a philosophical, cultural, and political epoch in which people embraced the view of the individual human being as a rational creature, who has the ability and the right to live according to his own independent judgment, for the sake of his own success and happiness. Its leitmotif was self-esteem—the individual of upright posture and fierce independence, who eagerly faces life’s challenges and views others not as pawns or masters but as sovereign equals. (3)

Whereas many authors simply assert their views, Watkins constantly demonstrates his with stories, quotes, and interesting examples. This is perhaps the book’s greatest virtue.

There is probably no people on earth with whom business constitutes pleasure, and industry amusement, in an equal degree with the inhabitants of the United States of America. Active occupation is not only the principal source of their happiness, and the foundation of their national greatness, but they are absolutely wretched without it, and . . . know but the horrors of idleness. Business is the very soul of an American: he pursues it, not as a means of procuring for himself and his family the necessary comforts of life, but as the fountain of all human felicity; . . . [I]t is as if all America were but one gigantic workshop, over the entrance of which there is the blazing inscription “No admission here except on business.” (6)

RooseveltCare curates beautiful and revealing quotes, poems, and narratives of individuals at all levels of achievement that bring to life a society of people who really did lift themselves up by their bootstraps. And Watkins portrays the early-American sense of life in terms anyone can readily grasp. For instance, “People during that era showed up to cheer the launch of new bridges and trains the way Americans today greet the Super Bowl” (6).

Watkins also shows that prior to rise of the welfare state, Americans’ unusual pride and industry were coupled with remarkable benevolence and generosity. “Self-reliant Americans” took it upon themselves to create “their own private safety net” (17), and “an unprecedented amount of private charity was available for those who needed it” (18). RooseveltCare provides a lucid account of how Americans could simultaneously be so charitable and scorn the entitlement state as unethical and un-American.

Watkins distills decades of complex history regarding the rise of entitlement statism into plain English and provides many supporting quotes from the movement’s leaders. He spotlights the deceptions of FDR, who, having realized that undisguised attacks on American ideals by his fellow “progressives” succeeded only in arousing resentment, devised a Trojan horse to advance their anti-American agenda.

Ponzi schemes and other policies that force the productive to support the unproductive have dug and continue digging a seemingly bottomless pit of debt. Watkins pulls back the curtain on this injustice, showing how it not only saddles the young and the unborn with massive debt but also diminishes their opportunities in myriad ways. Considering just Social Security, he reports, “Right now its direct toll is 12.4 percent on the first $113,700 of your earnings. . . . To put that into perspective, it means that for an entire month and a half, the household is working to pay for other people’s retirement” (72). And though that’s atrocious, he reveals our trajectory to be much worse: “To make good on our promises of handouts, . . . we would have to take $205 trillion today and invest it for eternity. The trouble is, we don’t have $205 trillion lying around. That’s more wealth than exists in the world” (67).

Fortunately, this is not where Watkins leaves us. He points out, “This country has seen vast and rapid changes in thinking before: from the propriety of breaking with Great Britain to our view of slavery, to women’s suffrage, to gay marriage. In every case, the winning side triumphed by taking a principled stand in the name of the good” (107–8). Watkins shows how the victims of this “debt draft” may reclaim their rights, defuse the impending financial disaster, and rebuild the land of self-reliance.

Considering the sweep of history this book recounts, it’s incredibly concise. And given the disaster it addresses, it’s surprisingly uplifting. RooseveltCare makes clear that resolving the debt crisis by ending the entitlement state is imperative both morally and practically. Watkins points the way to the moral high ground and furnishes the flag to raise on that peak once retaken. If you seek a freer, more prosperous future, here is the way.

View all posts by Jon Hersey →
Altruism on Parade: Unity in the “March for Life” and the Women’s MarchAlex Epstein on the Power of Opinion Stories
Return to Top