In his portrait of the late Hu Li (胡溧), Jon Wos depicts a middle-aged man in three-quarter profile standing before the backdrop of an artwork. The man in the portrait is dressed casually in a polo shirt, popped collar, and khakis, but nevertheless carries himself with dignity. His shoulders are back, but his posture remains unforced. He is fit and lean, with prominent veins in his forearm. The structure of the painting quickly leads one’s eyes to the man’s face. Here, one finds marks of time, but they do not saddle the man with weight or anguish. Instead, the man’s face is bold and certain. His gaze looks outward and above the viewer. His vision is direct and purposeful. In the space of the canvas, the artist shows you a man of substance. This man, Hu Li, was himself born into a family of artists and left the crushing boot of communist China to paint, teach, and mentor in the United States. 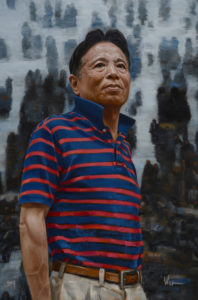 “Hu Li was the most passionate artist I have ever met,” says Wos, a former student of Li’s. “I most wanted to express his idealism. He truly could achieve whatever he set himself to accomplish.”

Wos shares a similar determination. “My goal in painting,” says Wos, “is to re-create a convincing metaphysical experience that is at once exciting or interesting, and that in some way induces in the viewer a sense of pleasurable reverence.”

You’ll find such reverence throughout Wos’s artworks. For example, Wos’s still life paintings of everyday objects reveal scenes of intricate depth and beauty. In Time For Reflection, Wos depicts a sterling silver tea service. Light and space reflect off the ornate, curved metal of the teapot, creamer, and sugar vessels. A teacup shines with faint hints of iridescent nacre. A single rose with luscious red petals rests across the platter. In life, one could take one’s tea in a paper cup. But in a deliberate and stylized world, even simple acts become embodied with grandeur. “I like to create little experiences,” says Wos, “showing that even simple objects can be interesting and induce a veneration for life.” 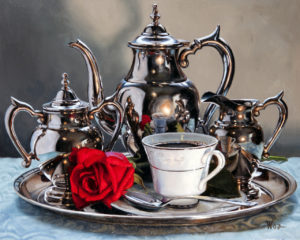 “Time for Reflection” by Jon Wos

Wos’s self-portraits, however, most clearly depict the “why” behind his art. Here is where we see the transformation from naturalism to romantic realism, from despair to ascendancy. Born with osteogenesis imperfecta, a genetic condition that results in a brittle skeletal system, Wos has endured dozens of broken bones throughout his life. He’s been bedridden countless times while recovering from painful breaks.

“My childhood was filled with casts and pain from the start,” says Wos. “Fractures of the femur were the worst as I had to be completely immobilized from torso to toes. Because the fractures were mostly a random occurrence, at any time my life could be brought to a full stop for months.”

“I developed a deep anxiety towards life,” says Wos. “I worried about everything from a very young age. This anxiety led me to have a feeling that much of this effort is futile, and this sense of futility led to depression.” “By the beginning of college, I had thought of suicide many times,” says Wos. “Finally, one day in college, I tried.”

Yet in the pit of that moment, Wos discovered his will to live. “It was at once awful and yet life changing in a profound way,” says Wos. “I needed to rethink the way I view life and myself.”

Soon after, Wos began his study of art under Hu’s Li tutelage. “He had us do many self-portraits for study,” says Wos. “This was exactly what I needed. I needed to see—really see—myself.”

While working on his self-portrait series, Wos read Ayn Rand’s The Fountainhead and The Romantic Manifesto. “Ayn Rand greatly impacted the way I view art and my goals in my work,” says Wos. “My self-portraits became less about the struggle and more about making life worth living. So, in the end, each self-portrait is a separate realization about myself and my psychological transformation from a naturalistic worldview to a romantic one.”

“I am the only one that can make my life worth living,” says Wos. “No amount of help from others can replace the effort you must put in to keep your fire burning.” 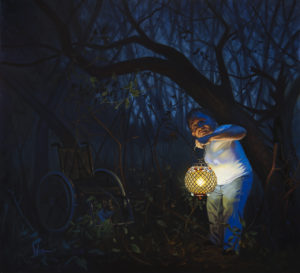 “Lighting the Darkness” by Jon Wos

In Lighting the Darkness, Wos depicts that fire. The scene is a forest at twilight. The only natural light is the faint blue glow of the background sky cutting through the thick woods. To the left is an empty wheelchair, caught in the tangled underbrush of the forest floor. It can go no further. A chihuahua sits under the chair, alert, but not scared, with attentive ears aimed forward to listen. To the right of the dog stands a short man—the artist—wearing jeans and a white T-shirt. Like the portrait of Hu Li, the man’s gaze looks outward and above the viewer. He is bent forward slightly, and in his left hand he holds an ornate orb lantern constructed with hundreds of stained-glass elements. This lantern and the singular light within it illuminates the scene. Without it, the dense growth would trap the man. With it, however, the man has the means to see forward. Through this power of illumination, the man’s face reveals the faint hint of a smile.

The painting has a tension though. The lantern illuminates the forest, allowing the man to see and move. But where and how far can he go? He cannot remain still in the forest at night—he must go somewhere. The painting does not resolve this question, but instead depicts the challenges of a difficult life.

Yet as long as the man possesses his light, he has hope. He has the power to see himself through the night.

For Wos, those moments are made through art. “Art is the fuel of the soul,” says Wos. “We must find what fuels each of us individually and protect that with all we can. Just as you protect the physically essential aspects of life, like your heart, your eyes, or the food on the table, your inner fire must be looked after just as carefully.”

“Some may be able to survive without that fundamental burning,” says Wos, “but they certainly cannot live without it.”

View all articles by Nicholas Provenzo →
Letter to the Editor
Alma Deutscher the FirstLive Free or Die: The Story of General John Stark
Return to Top