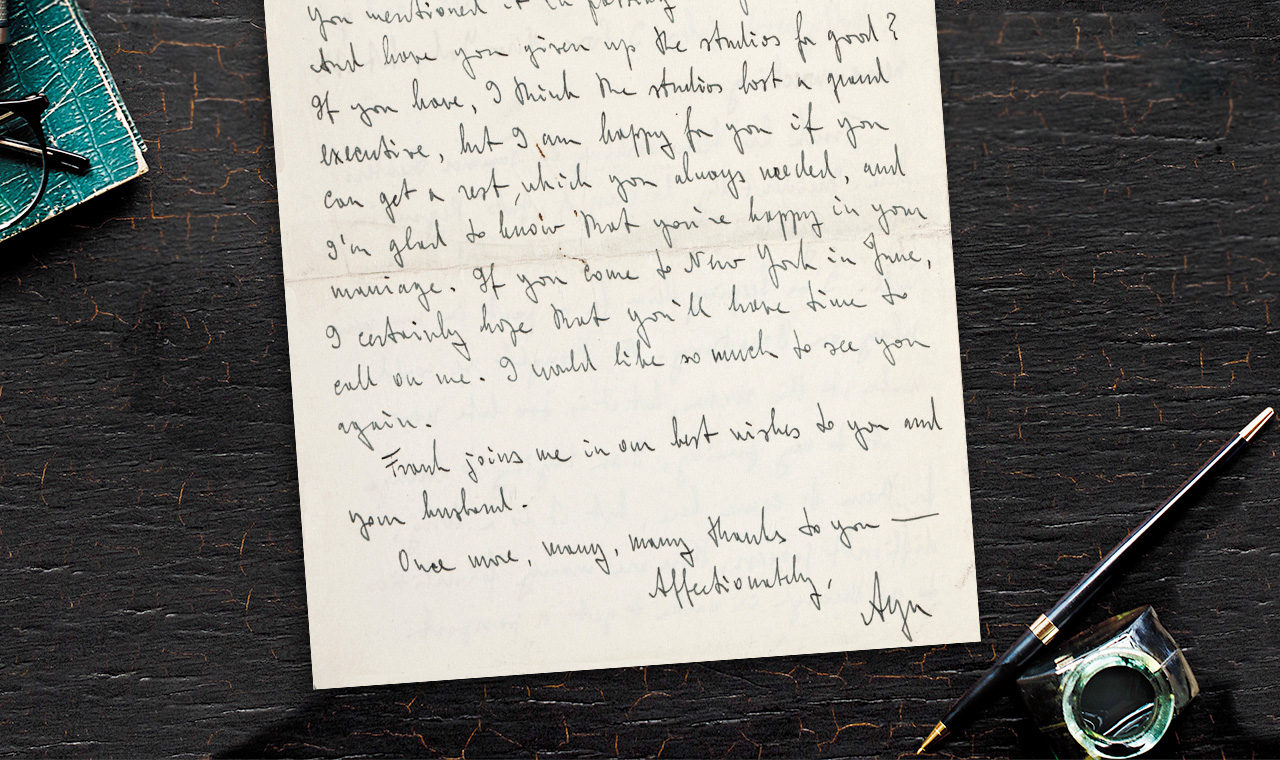 When Letters of Ayn Rand was published by Penguin in 1995, I made it clear in my preface that these were not the only letters of Ayn Rand, that there were, in fact, hundreds more in the Ayn Rand Archives that were omitted for numerous reasons, such as repetition or, as in the case of the many routine business letters, lack of special interest.

What I didn’t anticipate was that additional interesting letters would come to light, but such has been the case over the past twenty-two years. The sources of these “new” letters below are varied: discovered by researchers in the collections of other institutions, sent to the archives by the recipients, found folded inside other materials in the Ayn Rand papers, and some, I must admit, simply overlooked by me.

In his introduction to the Letters book in 1995, Leonard Peikoff wrote that he now had a follow-up answer when people ask him, “What was [Ayn Rand] really like?” Previously, he would advise reading her novels, but now he could also advise: “Read her letters.” I hope that these additions to her published letters will reveal even more about what Ayn Rand was really like. —Michael Berliner.

To Sarah Lipton, one of the Chicago relatives with whom Ayn Rand lived upon her arrival from Russia in 1926

I was very, very happy to hear from you. Please forgive me for delaying my answer for such a long time. I have lots to tell you.

I have written to Mrs. Stone [another Chicago relative] several times, but I did not get any answer. I do hope the family isn’t angry at me for something. I hope you don’t think I am terribly ungrateful. I have not forgotten all that the family has done for me—nor will I ever forget it. I also remember that I owe a big debt—and I think I’ll soon be able to begin to repay it. I think—and hope—that I’m going to get on my feet now.

I’ve had a pretty hard time. However, I shouldn’t complain, for I have had a job all through this depression. That newspaper article you sent me just about covers all the essential news about me—except that they didn’t get straight the story about how I met Cecil DeMille. They had that wrong. But I did work in the wardrobe at RKO—for over three years. It was not a bad job—not sewing (for I still can’t sew a stitch), but in the wardrobe office. I wasn’t getting very much money—but enough to carry on. . . .

Michael Berliner is the founding executive director of the Ayn Rand Institute, served as cochairman of ARI’s board of directors, and is currently senior adviser to the Ayn Rand Archives. He is editor of Letters of Ayn Rand and Understanding Objectivism and taught philosophy and philosophy of education for many years at California State University, Northridge.

1. Reliable speculation is that Ayn Rand is referring to the first four lines in Cane’s poem “Alone, Immune,” published in his collection Behind Dark Spaces (Harcourt Brace, 1930). “She was not bound by mortal sight, The stars were hers, at noon. Against the malady of night She stood, alone, immune.”

2. Ayn Rand’s allusion is to the arbitration case Cane’s law firm won for her against A. H. Woods, producer of Night of January 16th on Broadway.

3. Ayn Rand had sent Mrs. Satrin a copy of We the Living, inscribed “with profound gratitude for saving me from the kind of hell described in this book.”