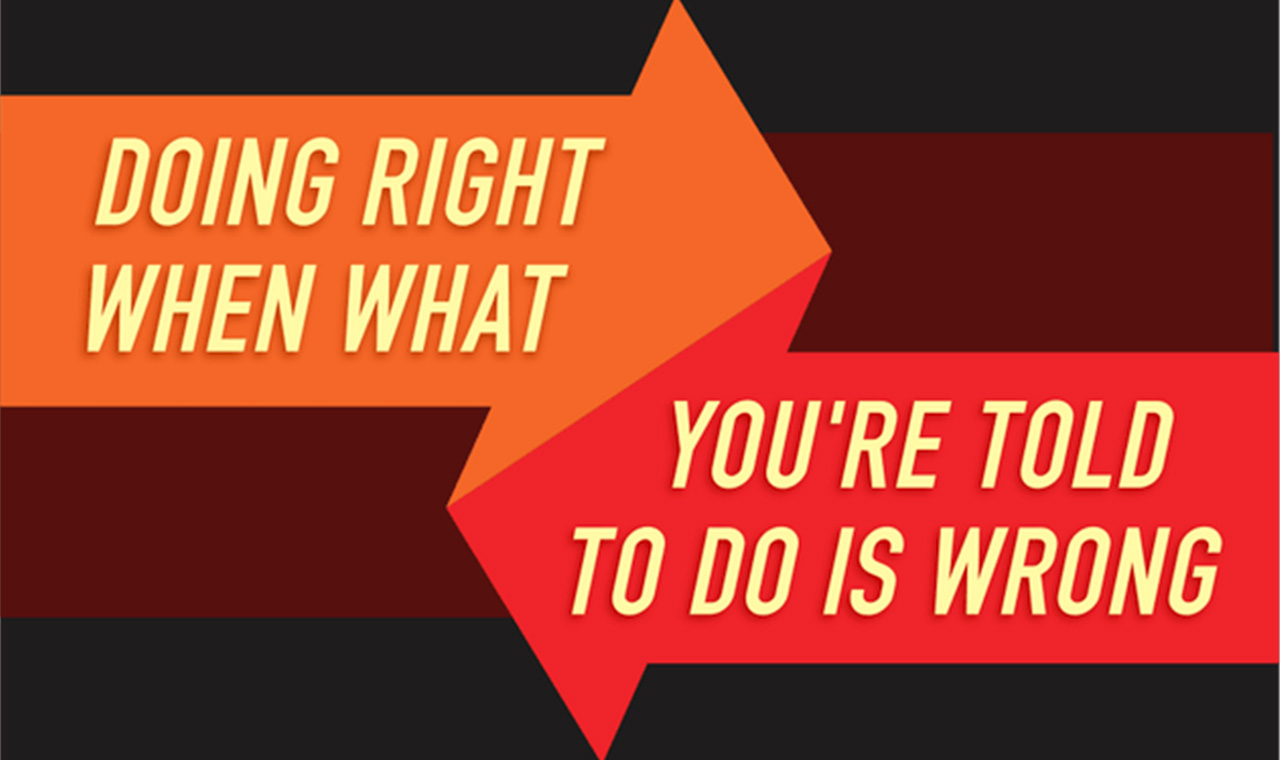 New and correctly formed ideas can revolutionize people’s thinking. A concept (or phrase or principle) that integrates essentially similar things and differentiates them from essentially dissimilar things via bright lines can enable people to think in ways that they previously could not. Ira Chaleff’s most recent book, Intelligent Disobedience: Doing Right When What You’re Told to Do Is Wrong, provides a vivid example of this truth.

Chaleff is an executive coach, speaker, and author who focuses on the proper relationships between those who are leading and those who are following in any given situation. Intelligent Disobedience examines such relationships specifically in regard to the questions of when it’s appropriate to obey an authority and when it’s proper to disobey.

Chaleff borrows the phrase “intelligent disobedience” from the field of guide dog training, where it refers to a quality that trainers seek to instill in guide dogs. The fact that guide dogs must be trained to obey commands is obvious. What may not be so obvious is that they must also be trained to disobey commands. For instance, if a blind person orders his seeing-eye dog to cross the street, and the dog sees a Tesla speeding quietly toward the crosswalk, the dog must disobey the order. To achieve the overarching purpose for which they are trained, guide dogs must be taught when and how to override their master’s orders and to act on their own better judgment. They must learn to engage in “intelligent disobedience.”

When he first heard the phrase “intelligent disobedience,” Chaleff realized that it perfectly captured “what [he] had been thinking and writing about for fifteen years!” (xi). The new idea—or, more accurately, the existing idea ripe for application in a new context—enabled Chaleff to integrate a massive amount of data, facts, stories, and actions with a degree of clarity and effectiveness that he previously could not have achieved. A huge portion of what he had long been teaching could now be far more easily understood, retained, conveyed, and put to use by means of this simple, integrative phrase. Chaleff embraced the term, adapted it to his work in human-to-human relationships, and honed his principles and a processes for “doing what’s right when you’re told to do what’s wrong.”

That, you’ll note, is the subtitle of his book. Its theme, however, is the virtue of independent thinking and the need to employ it in all contexts—including contexts in which one is subordinate to an authority, such as a boss, a general, a parent, a doctor. Put negatively, the theme is the vice of unthinking obedience and the dangers, injustices, catastrophes, and atrocities that follow from such obedience.

Chaleff’s method is profoundly empirical and inductive. His data and conclusions are drawn from a wide range of real-life stories and events—spanning from the aviation industry to the medical industry, from K–12 classrooms to WorldCom accounting offices, from McDonald’s restaurants to the Nuremberg trials, from the wave-battered cliffs beneath the Pacific Coast Highway to the burning towers of the World Trade Center.

Chaleff provides myriad examples of people unthinkingly obeying authorities and thereby causing great harm or even death—as well as many examples of people intelligently disobeying authorities and thereby averting disaster, saving lives, and, in at least one case, literally saving the world from nuclear destruction. (Read the book for riveting, jaw-dropping details.)

In his introduction to the book, Philip Zimbardo, creator of the Stanford Prison Experiment, recounts the experiments conducted by Stanley Milgram at Yale University in the 1960s. The Milgram experiments, you may recall, involved volunteers, labeled “teachers,” who were instructed by an “authority” in a lab coat to administer electrical shocks to innocent people. As Zimbardo tells it, “Milgram’s work revealed that among ordinary citizens, two-thirds were willing to deliver painful shocks at the insistence of an authority who was a stranger to them” (xiv).

Of course almost no one thinks he would engage in such behavior. But statistics suggest that most people are wrong on this count. “What happens,” Zimbardo asks, “when a scenario is described to college students that clearly depicts an authority figure making unethical and unjust demands on student participants, and they describe how they would react?” As you might imagine: “The vast majority report they would rebel.” But, Zimbardo says, various tests show that “when their classmates are actually put into that very same situation, just the opposite occurs—more than 80 percent blindly obey!” (xv).

Later in Intelligent Disobedience, Chaleff discusses the Milgram experiments in some detail along with a similar experiment conducted in France in 2010 that produced nearly identical statistical results (pp. 77–80). The implication of such experiments is that approximately 80 percent of the general population is dangerously secondhanded.

The good news is that the idea of intelligent disobedience can help people to become less secondhanded, to move in the direction of independent thinking, perhaps even to change for the better permanently.

Just as grasping the opposing concepts of secondhandedness and firsthandedness can help one to understand people’s choices and actions in ways that improve one’s thinking and foster independence (thank you, Ayn Rand), so, too, grasping the opposing ideas of intelligent disobedience and unthinking obedience can help one in similar ways. Indeed, intelligent disobedience is a form of firsthandedness. It is firsthandedness in the face of pressure, expectations, or orders from authorities to act in ways that one regards as morally or dangerously wrong.

Importantly, the idea of intelligent disobedience applies not only at the personal level, but also (by extension) at the cultural level—whether in a corporation, school, family, or nation. When understood and applied, the concept can help people to think more clearly about what independent thinking is, how it applies within social and institutional hierarchies, and why fostering and rewarding it is vitally important to accountability, harmony, and human flourishing.

Although I take issue with a few ideas in the book (e.g., the notion of “a primal instinct to obey authority” or that people are somehow “wired to obey”), I regard Intelligent Disobedience as superb. It is a clarifying integration of important facts and principles pertaining to choices and behavior in the context of social or institutional pressure from authorities.

In today’s culture—with authoritarianism on the rise, with people increasingly expecting “leaders” to tell them what to think and do, and with tribalism threatening to tear the West apart—this gem of a book provides a vital corrective.

Read Intelligent Disobedience. Share it with friends. Advocate these ideas. Your world will be better for it.