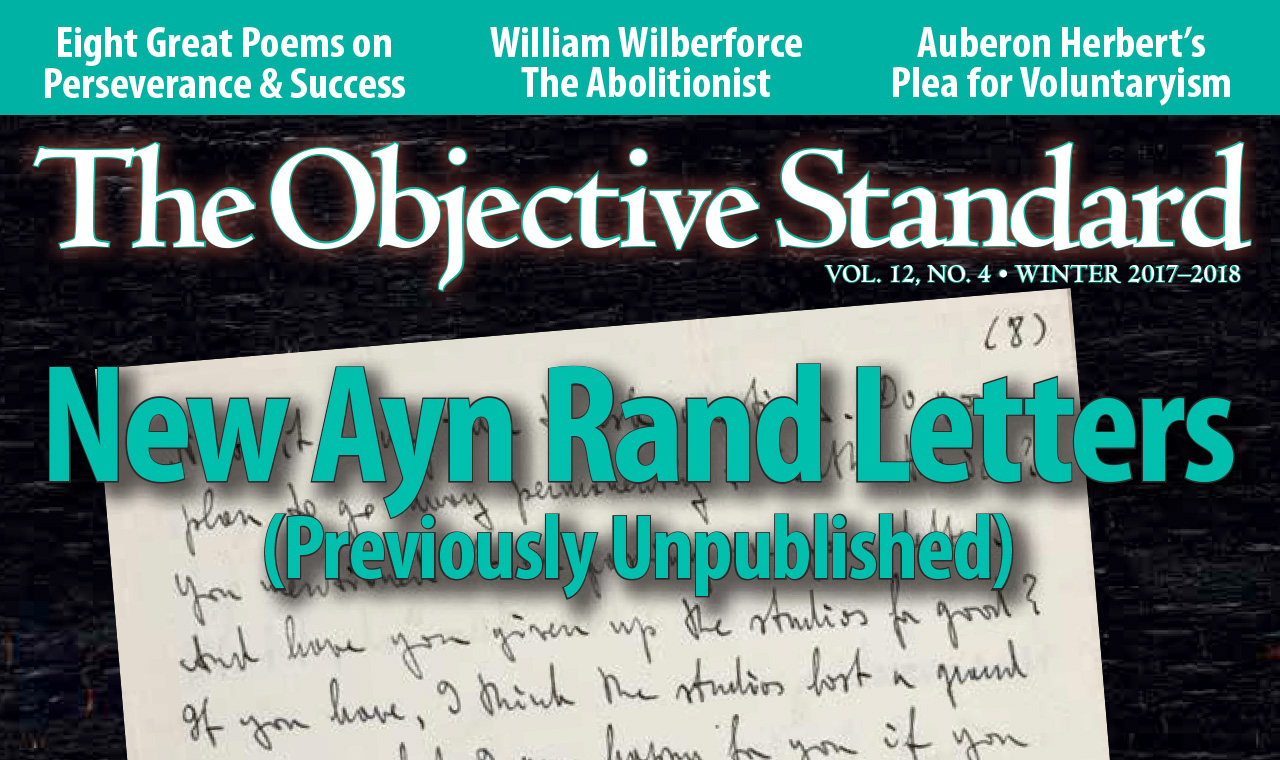 Welcome to the Winter 2017–2018 issue of The Objective Standard.

As you may have surmised from the beautiful cover (thank you for that, Pete Masterson!), this issue contains a treat of another order. Michael Berliner, founding executive director of the Ayn Rand Institute (ARI) and editor of the 1995 book Letters of Ayn Rand, has compiled thirteen previously unpublished letters from her hand, including letters to Sinclair Lewis, Melville Cane, and Joseph McCarthy. The sources of these “new” letters are varied, Berliner explains. Some were discovered in collections held by institutions other than ARI, some were sent to the Ayn Rand Archives by the recipients, some were found folded inside other materials, and some were simply overlooked when the original book was compiled. I’m delighted to share these letters with you. And I extend a huge thank-you to Dr. Berliner and the Ayn Rand Archives for bringing them to The Objective Standard for publication.

Next up is a powerful blast from a more-distant past: an essay by the great 19th-century British political philosopher Auberon Herbert. Herbert’s “A Plea for Voluntaryism” was the final article he wrote, and it presents his mature thinking on the social system he called “voluntaryism,” which is essentially what we today call laissez-faire capitalism. I think you’ll be surprised and enlightened by the principled nature of Herbert’s thinking and the clarity of his writing.

In “Wilberforce the Abolitionist: Monument to Perseverance,” Jon Hersey tells a story of one of the most principled and persistent men who ever lived. After reading it, I suspect you’ll join me in regarding Wilberforce not merely as a hero, but as a hero’s hero. This man’s saga is rocket fuel for the morally ambitious soul.

Fittingly, the portrait of Wilberforce is followed by “Eight Great Poems on Perseverance and Success,” including works by Rudyard Kipling, Henry Wadsworth Longfellow, Paul Laurence Dunbar, and Henry Van Dyke. So much soul food!

In our new section called “Shorts,” which contains articles shorter than fifteen hundred words, you’ll find “When the ‘Right to Protest’ Is No Such Thing,” by Jonathan Townley; “The Federalist Papers Brought the U.S. Constitution to Life,” by Robert Begley and Carrie-Ann Biondi; and “Freedom of Speech Is Freedom to Think,” by me.

The books reviewed in this issue include The Vanishing American Adult: Our Coming-of-Age Crisis—and How to Rebuild a Culture of Self-Reliance, by Ben Sasse (reviewed by Ryan Puzycki); The Internet of Money (Volume One), by Andreas M. Antonopoulos (reviewed by Michael Dahlen); Intelligent Disobedience: Doing Right When What You’re Told to Do Is Wrong, by Ira Chaleff (reviewed by me); and A Dearth of Eagles, by Andrew Bernstein (reviewed by Yvonne Laplante).

I hope you enjoy the issue. Let us know what you think, as we’re always striving to improve.

From all of us at TOS, have a wonderful holiday season and a prosperous new year! —Craig Biddle

View all articles by Craig Biddle →
Letter to the Editor
Thirteen Previously Unpublished Letters of Ayn RandWilberforce the Abolitionist: Monument to Perseverance
Return to Top