The Political Economy of Public Debt: Three Centuries of Theory and Evidence, by Richard M. Salsman

Dr. Richard M. Salsman’s book is an intellectual laser beam that offers clarity and precision in an important but neglected area of political and economic thought: public debt theory. The book’s title indicates the ambitious scope of the project, and the result matches the ambition. The book is engagingly written and structured in a concise, intuitive manner that traces the development of public debt theory from its earliest Classical era to the more recent Keynesian and Public Choice schools of thought.1

One thing in particular that makes Salsman’s discussion accessible and enjoyable to read is that he quotes writers at length, which enables readers to form their own conclusions about the ideas under discussion, rather than relying solely on Salsman’s assessments. This not only provides greater clarity; it also unearths some surprises. For example, I was surprised at the antipathy that many pro-free market classical economists have had toward any level of public debt. Adam Smith held that public debt “enfeebles” states and tended to “ruin” them, and he only reluctantly admitted that in the “exigency [of war] government can have no other recourse but in borrowing” (54).2

Anti-free market economist John Maynard Keynes is well-known for his antipathy toward creditors. He called bondholders “rentiers” and called for their “euthanasia” by having government drive interest rates down so low—as close to zero as possible—that these “rentiers” would be destroyed (9).3 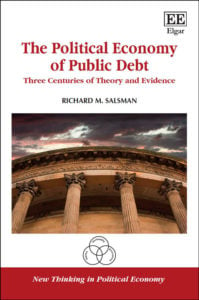 Zero-interest-rate policies (ZIRPs) [have been] in place in Japan since the mid-1990s and since 2008 in the United States, Britain, and the eurozone. . . . Artificially low public bond interest rates disguise the full cost of public borrowing just as public borrowing itself disguises the full cost of public spending; each reflect a policy of making a costly welfare state seem less costly to a democratic electorate than it really is. (253)

Salsman classifies public debt theorists into three categories that clarify their essential differences: pessimists, optimists, and realists. As one might expect, Salsman is a realist. As he explains, “Public leverage, for the realist, is neither inevitably disastrous nor metaphysically infinite”; whereas “pessimists seem continually dumbstruck that things aren’t deteriorating as much as they feared, while optimists seem perpetually surprised that things aren’t improving as much as they hoped” (260). . . .

Raymond C. Niles is a senior fellow and columnist at the American Institute for Economic Research and a former university professor. He holds a Ph.D. in Economics from George Mason University and an MBA in Finance & Economics from the Leonard N. Stern School of Business at New York University. Prior to embarking on his academic career, Niles worked for more than fifteen years on Wall Street as senior equity research analyst at Goldman Sachs, Schroders, and Citigroup, and as managing partner of a hedge fund investing in energy securities. In addition to numerous articles in scholarly and popular publications, Niles has contributed book chapters to The Moral Case for Finance, and the recently published book, Coronavirus and Economic Crisis, edited by Peter G. Earle, and published by the American Institute for Economic Research.

View all articles by Raymond C. Niles →
A Companion to Ayn Rand, edited by Allan Gotthelf and Greg SalmieriSeven Poems on Living Large and Loving Life

2. Smith’s wariness of public debt made him a debt pessimist, explained below.

3. Keynes detested public bondholders (“rentiers”), but he nevertheless advocated an expansive role for public borrowing. He and his followers were debt optimists, explained below.

4. GDP stands for gross domestic product, a measure of the economy’s total output. Great Britain successfully paid down the debt on both occasions. Although its public debt is growing again, today Great Britain’s public debt to GDP ratio stands at about 50 percent.

5. Calculated from the consumer price index, January 1971–June 2016. Cumulatively, the reduction in real value since January 1971 is 84 percent.

6. There was a brief and rare modern exception from 1998 to 2001, when the U.S. government ran surpluses and politicians even considered paying down the national debt. It didn’t last. Large budget deficits due to the War on Terror after 2001, and especially due to expenditures related to the housing finance crisis after 2008, caused the national debt to nearly double from 57 percent of GDP in 2000 to 104 percent of GDP in 2016.