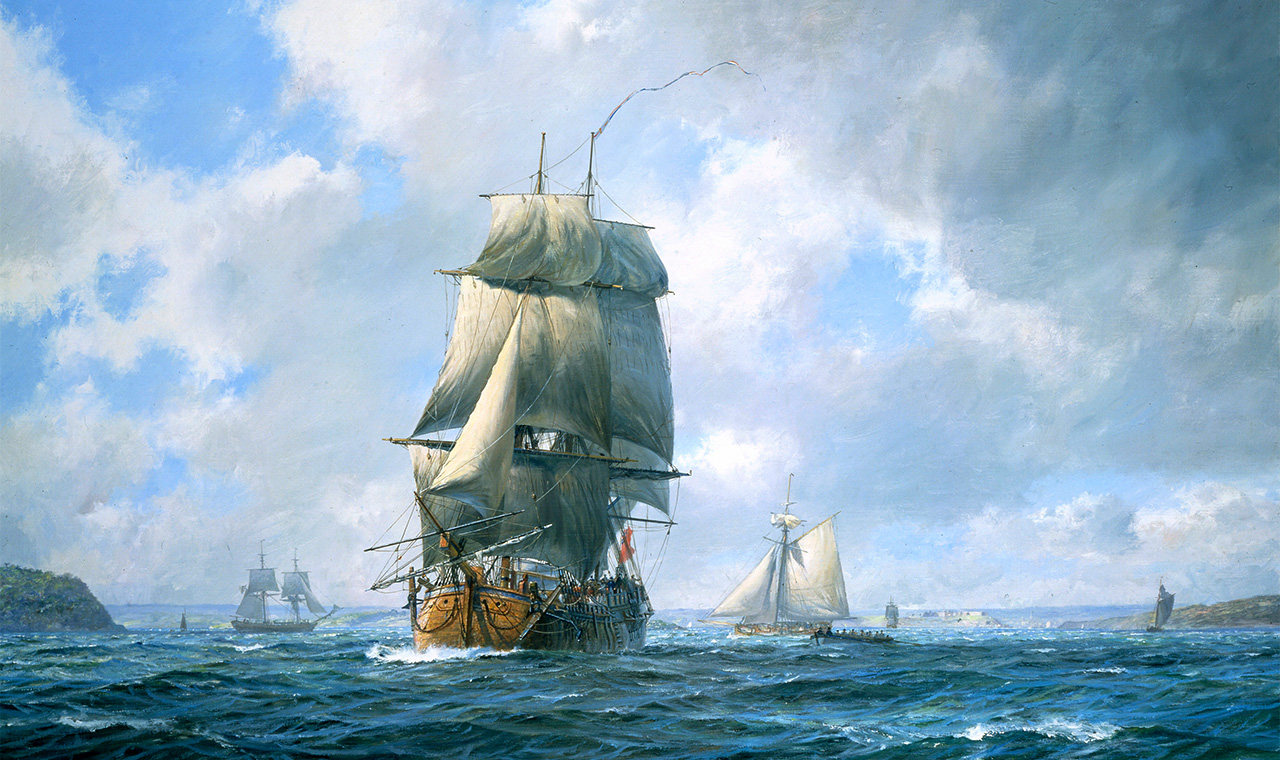 Close-up of Endeavor Leaving Plymouth, by Geoff Hunt, from the Diploma Collection of the Royal Society of Marine Artists
History

Captain Cook: Explorer of the Enlightenment

The Enlightenment was an era of vast intellectual achievements, when philosophers, scientists, engineers, and statesmen, such as Isaac Newton, John Locke, Benjamin Franklin, Voltaire, and Adam Smith, revolutionized the way we think about the world. But among this pantheon is one whose feats are relatively little known to Americans—which is astonishing considering the scale of his discoveries. This is Captain James Cook, the greatest navigator and explorer of his age—perhaps of all time—who was born into an obscure English family and enjoyed no formal education but rose through hard work and discipline to the highest ranks of British society.

Sadly, thanks in part to the doctrines of cultural relativism and racial politics fashionable in our own day, Cook now often is regarded as a vanguard of imperialism and the exploitation of native peoples. Prominent University of Hawai‘i professor Haunani-Kay Trask, for example, has labeled Cook a “syphilitic, tubercular racist,” and her sister, Miliani Trask—a political activist who served as a trustee for the Office of Hawaiian Affairs—has urged people to vandalize the monument to Cook located on Hawai‘i Island.1

This is a travesty, because Cook was a humane man, a conscientious scholar, and—in the context of his era—astonishingly modern in his treatment of the natives his expeditions first encountered. Equally remarkable was his care for the men who accompanied him on his three voyages around the world and who suffered few of the illnesses common to sailors then, thanks to Cook’s scientific concern with hygiene and diet. Before meeting his tragic death at Kealakekua Bay, Hawai‘i, Cook broke all records of previous explorers and set a few that would stand for centuries afterward.

Cook, who partly inspired the character of Captain Kirk in Star Trek, once voiced his ambition to seek out new civilizations when he wrote in his journals that he had gone “not only farther than any other man has been before me, but as far as I think it possible for man to go.”2 He wrote those words on January 30, 1774, as his ship lay at 71° south latitude, which no expedition would reach again for fifty years.

Over the course of his three missions, Cook discovered Hawai‘i, Australia’s Great Barrier Reef, and countless Pacific islands and peoples. He explored New Zealand, Australia, and Alaska, and he became the first European to see a kangaroo, the Maori haka dance, and the Alaskan Inupiat people. Most important, the maps he drew made the scientific exploration of the Western hemisphere possible and changed the course of world history so dramatically that it still is difficult to grasp the true grandeur of his accomplishments. . . .

View all articles by Timothy Sandefur →
Letter to the Editor
Nuggets of Note – May 3, 2017Seven Great Poems on Independence

1. Tony Horwitz, Blue Latitudes (New York: Holt, 2002), 400. Horwitz’s book is a highly entertaining and interesting comparison of Cook’s explorations with 21st-century life in the places he visited. Of the many books on Captain Cook, the finest is indisputably J. C. Beaglehole’s masterpiece, The Life of Captain James Cook (Stanford, CA: Stanford University Press, 1974). Briefer, but still quite good, is Richard Hough’s Captain James Cook: A Biography (New York: Norton, 1997). Fascinating perspectives on Cook’s interactions with natives are provided in Nicholas Thomas, Discoveries: The Voyages of Captain Cook (London: Penguin, 2004); and Anne Salmond, The Trial of the Cannibal Dog (New Haven, CT: Yale University Press, 2003). Cook’s complete journals were edited by Beaglehole and published in five volumes, but they are so rare and expensive that they are inaccessible to most people. A heavily abridged, one-volume edition is available: Philip Edwards, ed., James Cook: The Journals (New York: Penguin, 2003); and a new, nicely illustrated edition, The Voyages of Captain Cook (Minneapolis: Voyageur Press, 2016), is fun reading but is based on an edition of Cook’s journals that the captain himself disapproved. The Australian government has posted the entire contents of Cook’s journals from the first voyage, as well as Banks’s journals and those of other expedition members, at http://southseas.nla.gov.au/index_voyaging.html.

2. Edwards, Cook: The Journals, 331. Cook’s spelling was unorthodox even by the standards of his day, but I have modernized it for all quotations herein, for reasons well expressed by Craig Nelson in his superb biography of Thomas Paine: “Writers of the eighteenth century did not believe that consistency in spelling, capitalization, punctuation, or italics was a mark of literacy. I have used modern versions of their work so that today’s reader will not imagine them fusty, old-fashioned, or poorly educated, which would have horrified them. [They] considered themselves a forward-thinking avant garde, absolutely modern, who believed with all their hearts that they had it in their power to begin the world over again” (Craig Nelson, Thomas Paine [New York: Penguin, 2007], n.p.).

25. Cook named many of the lands he discovered after people he admired or who had shown him favor. Principal among these was John Montagu, Fourth Earl of Sandwich, who is credited with inventing the sandwich and who served as First Lord of the Admiralty, overseeing the Royal Navy. Cook also named the Hawaiian archipelago the Sandwich Islands in his honor. The South Sandwich Islands, by contrast, are an uninhabited and inhospitable archipelago some 1,600 miles east of Argentina.

28. Technically, “Captain” Cook never held the rank of captain; he was a lieutenant on his first voyage and commander on his second. A post-captain is a rank above captain.

38. Another crewman, William Bligh, served as master of the Resolution. A decade later, he commanded the Bounty on its fateful mission from Tahiti to the Caribbean. In Tahiti, the crew mutinied and left Bligh and eighteen other men in a boat. Bligh managed the astonishing feat of navigating this boat, without charts or a chronometer, more than four thousand miles to Timor in Indonesia, with the loss of only a single man. Still another member of the crew, John Ledyard, later mounted a one-man expedition from St. Petersburg, Russia, to Yakutsk—walking alone nearly five thousand miles before being deported by the czarina.