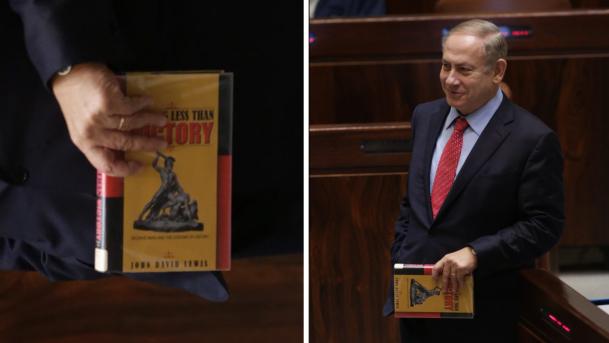 Netanyahu Reads Nothing Less than Victory

Israeli Prime Minister Benjamin Netanyahu has been reading John David Lewis’s Nothing Less than Victory: Decisive Wars and the Lessons of History. This is exceedingly good news.

Lewis examines six major wars, devoting one chapter each to the Greco-Persian wars, the Theban wars, the Second Punic War, the campaigns of the Roman emperor Aurelian, the American Civil War, and two chapters to World War II. He shows how the Greeks defeated the mighty Persian empire, how the Thebans shattered the mirage of Spartan invulnerability, how the Romans swiftly ended a long war by attacking the enemy’s home front, how Aurelian battled enemies on many fronts to reunite Rome, how William Tecumseh Sherman marched through the American South and destroyed the Confederate will to fight, and how America achieved a permanent victory over Japan. While recounting the key events of each conflict, Lewis draws several important, universally applicable lessons.

“One such lesson,” Wahl continues, “pertains to the fundamental cause of wars. Although the wars examined in Nothing Less than Victory differ substantially in terms of specifics, Lewis points out that each ‘exhibited a certain underlying cause that led to the initial attacks’ (286). This cause, he says, is invariably ideas.”

Quoting from the book:

[T]he wellspring of every war is that which makes us human; our capacity to think abstractly, to conceive, and to create. It is our conceptual capacity that allows us to choose a nation’s policy goals; to identify a moral purpose for good or ill; to select allies and enemies; to make a political decision to fight; to manufacture the weapons, technologies, strategies, and tactics needed to sustain the decision over time; and to motivate whole populations into killing—or dissidents into protests. Both war and peace are the consequences of ideas—especially moral ideas—that can propel whole nations into bloody slaughter on behalf of a Fuhrer, a tribe, a deity, or into peaceful coexistence under governments that defend the rights and liberties of their citizens.” (2)

Lewis concretizes this point with respect to each war he examines, explains Wahl:

He shows, for instance, that what motivated the Persian king Xerxes to invade Greece was an ideology that “conjoined claims to divine protection with displays of magnificence, demands for submission, and continuous expansion of [the king’s] rule across the entire world” (15). Likewise, he shows that what motivated the Japanese to expand their empire by conquest was an ideology holding sacrifice for the “greater glory” of the emperor as the highest moral ideal (241–42). And Lewis shows that in order for a victim nation to defend itself and achieve victory over its aggressor, it must quash the ideology driving the aggressor nation. In the case of Imperial Japan’s war against America, for instance, victory for America meant “the permanent reversal of the Japanese decision and commitment to fight, demonstrated in action by their leadership, army, and population at large, and the repudiation of the ideology behind the war.” (248)

Netanyahu’s reading of Lewis’s book highlights the immense value of Objectivist intellectuals producing such crystal-clear, well-researched, powerfully persuasive works in specialized fields. (Another instance of this is Alex Epstein’s highly influential book The Moral Case for Fossil Fuels.) Although, as Haaretz notes, “Time may tell whether Lewis’ book influences the prime minister’s future military thinking,” given the clarity and power of Dr. Lewis’s writing, I suspect the book is already doing so.

John would be proud to know of this development. And we are fortunate to live in a future he shaped—and continues shaping.