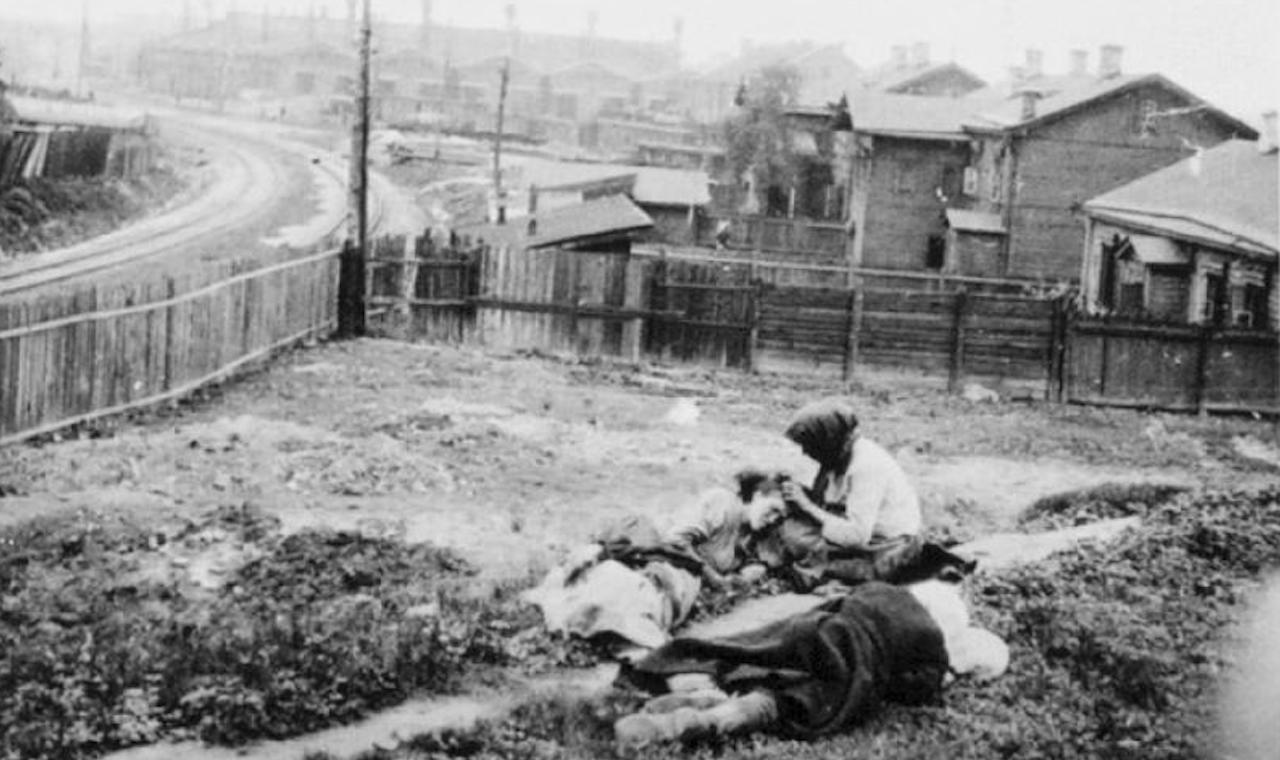 Taken in Kharkiv in 1932-33. Three women have been evicted from their home and are lying in their yard dying of hunger.
History,  Philosophy

The Socialist Holocaust and its American Deniers

Karl Marx famously dubbed religion “the opium of the people.”1

The blood-drenched history of communism—that is, full-fledged socialism, as established in the Union of Soviet Socialist Republics and elsewhere—is thoroughly documented. But despite the horror of socialism’s history, numerous U.S. college professors continue to uphold it as a moral ideal.

The ideal they advocate is not a mixed economy welfare state such as the partial socialism of Sweden or Denmark, or that advocated by Bernie Sanders or Barack Obama. No, these American professors preach the beneficence of Stalin, the rectitude of Soviet Communism, and the evil of capitalism. They do this as tenured professors at respected American universities.

Regardless of the accuracy of Marx’s antireligious claim, a more baleful one is indubitably true: Socialism is the hallucinogen of the intellectuals.

Unfortunately, these hallucinating apologists for mass murderers do not suffer their vices alone. They spend their days and years pushing false history and evil ideas on college students, who, by virtue of their youth, have insufficient knowledge with which to counter the lies.

I write this essay as an open letter to America’s youths, providing them with knowledge they need to combat their professors’ lies.

Socialist theory is grounded largely in the writings of Karl Marx (1818–1883). Marx was a German philosopher and a philosophic materialist, holding that reality consists exclusively of material objects and their activities; in short, everything is physical.

To philosophic materialists, the human “mind” is no more than neural firings in the brain, electrical discharges in the nervous system, and so forth. Human nature, on this view, can be fully explicated in physical-chemical terms. Thoughts, values, and emotions are specific types of material activity, no more.

If everything is matter, then humans are purely physical beings. When they produce goods or services, they do so exclusively by means of manual labor. Who, on this view, creates wealth? Is it the entrepreneurs and the capitalists who invent products or finance their production? Or is it the workers in the factories and the fields—the men and women who use their hands to physically make the goods?

On the premise of materialism, it is the latter. The workers create the goods—but the capitalists own them. This, says Marx, is unjust.

The owners grow wealthy by exploiting the labor of the workers. The owning class is, therefore, the inveterate enemy of the working class. Human society, especially under capitalism, is permeated by social-economic injustice.

Further, the owners use their economic power to buy political influence and thus control the state. They pass laws protecting private property, their ill-gotten wealth that properly belongs to the workers. The workers have no legal recourse by which to recover what is rightfully theirs.

Capitalism, Marx concludes, is a system of institutionalized exploitation. There is but one means to redress the injustice: The workers must rise, a la the Paris street mob of the French Revolution; they must seize the wealth that properly belongs to them, and they must obliterate the capitalists. The owning class will be incarcerated and/or killed. “We have no compassion,” stated Marx. “When our time comes, we shall not make excuses for the terror.”2

The essence of Marxist theory is unremitting class warfare. Because these economic classes are groups, not individuals, it is the group—whether the owning class or the working class—that is the unit of moral value. . . .

View all articles by Andrew Bernstein →
Letter to the Editor
The Cave and the Light: Plato Versus Aristotle, and the Struggle for the Soul of Western Civilization, by Arthur HermanLiberal Education and the Quest for Truth, Freedom, and Greatness

4. Martin Malia, “Foreword: The Uses of Atrocity,” The Black Book of Communism, xiv.

6. Malia, “Foreword” to Courtois, The Black Book of Communism, xii.

9. Adam Ulam, “Introduction” to Miron Dolot, Execution by Hunger: The Hidden Holocaust (New York: W. W. Norton & Company, 1985), xi. Dolot, who as a young man survived the Holodomor, provides here an eyewitness account of its extent and its horror.

19. The number of innocents cruelly murdered under Lenin’s authority is numbing: 50,000 civilians killed in the Crimea in 1920, between 300,000 and 500,000 killed or deported in the Cossack regions of the Don and the Kuban in 1919 and 1920, lists of thousands of civilians each in one town after another executed in 1920 and 1921 for no crime other than belonging to the “possessing classes,” some 8,000 priests, monks, and nuns butchered in 1922, and on the savage orgy of mass murder went. Martin Latsis, one of Lenin’s secret police officers, told his men: “We don’t make war against any people in particular. We are exterminating the bourgeoisie as a class.” In carrying out such class extermination, the Soviets physically forced middle-class women, on their knees, to scrub the toilets of the secret police, then gang-raped them, then put a bullet in their skulls, then left their corpses moldering in mass graves with other such “class enemies.” One of Lenin’s henchmen said that instead of a “People’s Commissariat for Justice” there should be a “People’s Commissariat for Social Extermination.” “Excellent idea,” Lenin countered. “That’s exactly how I see it. Unfortunately, it wouldn’t do to call it that!” Historian, Martin Malia, wrote: “From the start, Lenin expected, indeed wanted, civil war to crush all ‘class enemies.’ . . . So much for the fable of ‘good Lenin/bad Stalin.’” Courtois, The Black Book of Communism, xviii, 8, 62, 100, 102, 105–6, and 126.

30. Malia, “Foreword” to Courtois, The Black Book of Communism, x.