Norman Rockwell: Behind the Camera, by Ron Schick

People in paintings often do very little. Sometimes they are seated, looking blankly off into space, or asleep on a couch, dreaming who knows what. Their emotional expressions typically range from bored to unconscious. And they evoke little more than a yawn.

Contrast such subjects with those in the work of Norman Rockwell. The people in his paintings do quite a lot. The young boys and girls are visibly curious and sometimes even rowdy. They dunk each other in pools, gaze intently at lovers on a train, make faces in a mirror while getting a haircut. Their older siblings and parents are active as well. They race steamboats, compete in horseshoe forging contests, stand tall and speak their minds. Even the old men in Rockwell’s paintings are active, carrying frames through museums, swimming in rivers, playing music together after hours in a barbershop.

The emotional expressions of Rockwell’s subjects are equally unusual when compared to works of other artists. They exhibit intense concentration, open admiration, exaggerated silliness, solemn reverence, impassioned rage, disillusioned surprise, undiluted happiness. And when we view his paintings, we react accordingly. 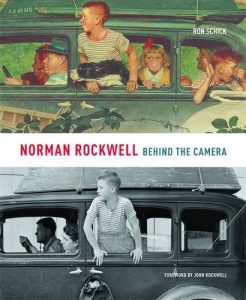 In Norman Rockwell: Behind the Camera, author Ron Schick explores a major aspect of the method behind Rockwell’s art: his use of the camera. And the book stars many of the photos Rockwell took as references for his paintings, often side by side with the paintings themselves.

Schick frames the pictures and paintings with insightful commentary. He observes, for example, that the camera enabled Rockwell to capture and later paint fleeting emotional expressions; gave him greater control over which colors he chose for the final painting; “freed him to depict his scenarios from above or below, up close or at a distance”; and enabled him to use characters who fit the idea he had in mind for a painting rather than try to “cast characters against type in roles they did not fit” (19, 20).

View all articles by Daniel Wahl →
Letter to the Editor
Liberated Parents, Liberated Children: Your Guide to a Happier Family, by Adele Faber and Elaine MazlishDefending Free Speech, edited by Steve Simpson
Return to Top