Liberated Parents, Liberated Children: Your Guide to a Happier Family, by Adele Faber and Elaine Mazlish

Adele Faber and Elaine Mazlish are well known for authoring Siblings Without Rivalry and the classic How to Talk So Kids Will Listen & Listen So Kids Will Talk. In these two books, they provide wise counsel to parents at wit’s end, offering them solutions to seemingly unsolvable problems; a way of communicating that connects parents and children rather than driving wedges between them; and testimonials to the effect that, although things may seem tough now, they can get better, and, with the right principles and practices, most likely will.

Although many people see Faber and Mazlish as experts, this is not how we see them at the start of Liberated Parents, Liberated Children: Your Guide to a Happier Family. Here, unexpectedly, we find that they are unskilled parents with bad habits and out-of-control tempers. They have ambitious goals as parents, but, as becomes obvious almost instantly, they are not yet living up to them. Recounting one unnerving experience, for example, the authors write:

I, who was going to be the mother of the century—I, who had always felt so superior to those shrill, arm-yanking, “mean” mothers in the supermarket—I, who was determined that the mistakes of my parents would never be visited upon my children—I, who felt I had so much to give—my warmth, vast patience, my joy in just being alive—had walked into the children’s room this morning, looked at the floor smeared with fingerpaints, and unleashed a shriek that made the supermarket mother sound like the good fairy. But most bitter to me were the things I said: “Disgusting . . . slobs . . . can’t I trust you for a minute?” These were the very words I had heard and hated in my own childhood. (1–2)

Soon, however, the authors go to meet Haim Ginott, a child psychologist who was giving a lecture nearby. As they recall, Ginott began his lecture by asking: “What is it about the language I use with children that is different?” 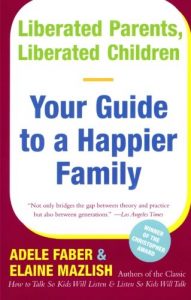 “The language I use,” he continued, “does not evaluate. I avoid expressions which judge a child’s character or ability. I steer clear of words like ‘stupid, clumsy, bad,’ and even words like ‘beautiful, good, wonderful,’ because they are not helpful; they get in a child’s way. Instead I use words that describe. I describe what I see; I describe what I feel.

“Recently a little girl in my playroom brought me a painting and asked, ‘Is it good?’ I looked at it and answered, ‘I see a purple house, a red sun, a striped sky, and lots of flowers. It makes me feel as though I were in the country.’ She smiled and said, ‘I’m going to make another!’

“Suppose I had answered, ‘Beautiful, you’re a great artist!’ I can guarantee that that would have been the last painting she did that day. After all, where can one go from ‘beautiful’ and ‘great’? I’m convinced: words that evaluate, hinder a child. Words that describe, set him free.

“I also like descriptive words,” he continued, “because they invite a child to work out his own solutions to problems. Here’s an example: If a child were to spill a glass of milk, I would say to him, ‘I see the milk spilled,’ and then I’d hand him a sponge. In this way, I avoid blame and put the emphasis where it belongs—on what needs to be done.” (3–4)

It will come as no surprise to hear that, having attended this lecture, Faber and Mazlish wanted to learn more. . . .

View all articles by Daniel Wahl →
Individual Rights and Principles of EgoismNorman Rockwell: Behind the Camera, by Ron Schick
Return to Top