In his Forbes article “First the Government Went After ExxonMobil. Now They’re Going After Me,” Alex Epstein explains:

Massachusetts Attorney General Maura Healey is persecuting ExxonMobil and now me for having opinions on fossil fuels she disagrees with. My company, the Center for Industrial Progress, is one of the 10 cited in the new subpoena of Exxon, meaning that Exxon is supposed to release any private or confidential correspondence any of its employees have ever had with anyone from my company. I have nothing to fear whatsoever about what such a witch-hunt would or wouldn’t reveal on my end, but I do not tolerate anyone violating my rights.

So I wrote the Attorney General a three-word response . . . 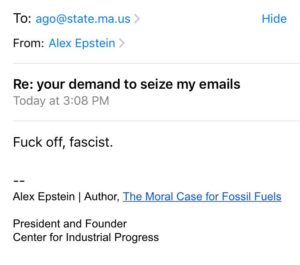 Although Epstein normally does not use such profanity, and although TOS normally wouldn’t reprint such language, both are entirely warranted in this case.

This vile leftist—AG Maura Healey—is using the coercive power of government to stifle those who disagree with her. She is, in essence, pointing a gun at Epstein and others and saying “Shut up or go to jail.” She is engaging in the most tyrannical form of tyranny: an assault on the right to freedom of speech.

Given the First Amendment, how does AG Healey aim to get away with this? She aims to do so by claiming that those being subpoenaed have engaged in “fraud.” Has she presented evidence of fraud on the part of Exxon or CIP? Has she shown that their representatives have fabricated facts or concealed evidence about CO2 or climate change? She has not. And, as Epstein notes, she cannot because “all the evidence about CO2 and climate is in the public domain, largely collected and disseminated by government agencies or government-funded educational institutions.” Exxon and CIP are simply expressing their views regarding the facts, evidence, and claims that are available to everyone. Epstein elaborates:

By calling dissenting opinions fraud, the Massachusetts Attorney General and others are making independent thought a crime. To do this in the name of science is obscene. Science thrives on the open, competitive exchange of evidence and arguments—not of suppressing dissenters. True scientists can win on the competitive market of ideas. Newton didn’t need to suppress dissenters to advance his three laws of motion and Einstein didn’t need to suppress dissenters to advance his theories of relativity. Only those with fallacious conclusions are desperate for government to descend on their opponents. The opponents of the heliocentric theory did need to suppress Galileo. And the opponents of fossil fuels, who have staked careers and status on what are now clearly exaggerated assessments of CO2’s warming impact and clearly underestimated assessments of fossil fuels’ life-and-death importance to billions, cannot win on a competitive market of ideas. This is why they are so desperate to claim that “the debate is over,” to indoctrinate young students into climate catastrophism before they can think critically, to deny government research funding to scientists who disagree with them, and to falsely claim a 97% consensus.

In a sense, this targeting of Epstein is a welcome development. Of course, for an attorney general to pretend that speech she disagrees with is “fraud” and thus to violate the rights of individuals who engage in such speech is not good. It is evil. But if she is going to violate rights in this manner, it is best that she attempt to violate those of a man of Epstein’s caliber.

AG Healey apparently is operating on the assumption that Epstein is just another “conservative” who will buckle when she and her leftist thugs play Orwellian word games and apply unjust legal pressure. But Epstein is no conservative. He will not buckle. He’s a man of reason, objectivity, moral certainty, and unshakable integrity—who owns the moral high ground in this matter, knows he owns it, and knows how to articulate and show that he owns it.

Epstein’s reply to AG Healey about the subpoena was, in light of the facts, perfect. And his Forbes article on the subject has already stripped her of any pretense of civility in the matter. So share Epstein’s article and his related tweets and Facebook posts. Let AG Healey know that you know she’s naked—except, of course, for the gun. (You can write her at ago@state.ma.us, and tweet her at @MassAGO.) And stay tuned. If this naked fascist persists in pointing a gun at Epstein, she likely will wish she had not.

View all articles by Craig Biddle →
Letter to the Editor
Dave Rubin and the Return of Classical LiberalismLiberal Right vs. Regressive Left and Religious “Right”
Return to Top