Chris Bailey’s Productivity Project: How to Accomplish What You Set Out To Do

A review of The Productivity Project: Accomplishing More by Managing Your Time, Attention and Energy, by Chris Bailey (Toronto: Random House Canada, 2016. 304 pp. $17.44, hardcover; $13.99, Kindle.) Citations are to the Kindle version. 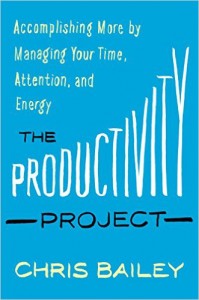 Chris Bailey probably wouldn’t be the first person you’d think to turn to for advice on productivity. When he wrote The Productivity Project: Accomplishing More by Managing Your Time, Attention and Energy, he was a recent university graduate in his mid-twenties, with no income. He had never owned a home, been married, had children, or worked full-time apart from school. What business did he have claiming to be a productivity expert?

“While some people have normal interests like sports, music, and cooking,” Bailey writes, “as strange as it might sound, I have always been obsessed with becoming as productive as possible” (loc. 72). Upon graduating from university, he rejected two promising job offers, deciding instead to independently research and experiment with productivity techniques, testing to see which ones were most effective. The result of the project is his book, which condenses all of his findings into one quick and easy read.

If you were asked to close your eyes and visualize a very productive person, you might imagine someone working at a fast pace, jumping from task to task, never missing a beat. Although this might be the case for menial jobs, Bailey argues that it is not the case for more conceptual work. “Busyness is no different from laziness when it doesn’t lead you to accomplish anything. Productivity isn’t about how busy or efficient you are—it’s about how much you accomplish. Just because you feel productive doesn’t mean you are—and the opposite is often true” (loc. 3222). He advises working at a pace that is slow enough to allow you to maintain awareness of what you are doing and why. “When you work on autopilot, it’s virtually impossible to step back from your work to determine what’s important, how to think more creatively, how to work smarter instead of just harder, and how to take control over what you’re working on instead of working on the tasks that other people throw (or in most cases, email) your way” (loc. 230).

So, assuming you are working at such a pace, what should you choose to do? “There are certain tasks in your work that, minute for minute, lead you to accomplish more,” says Bailey (loc. 510). Work to identify the tasks that create the most value, and invest the majority of your time and attention in those. If you are an entrepreneur, for example, that could mean prioritizing your own learning, planning out your week, training staff, and automating repetitive tasks, while minimizing time spent on low-return emails and meetings. Additionally, he advises working on your most significant tasks during your “Biological Prime Time,” the time of day when you feel most energetic and focused. For many people this is the morning, but not for everyone. Once you identify the time of day that you are at your best, Bailey advises strictly reserving that time for those tasks that require a deep amount of focus. Shut off everything that may buzz, beep, or ring, and really concentrate. Dedicate a specific time for working on maintenance or support tasks, and resist the urge to waste your best hours on them. . . .