It is hard to overrate the importance of books in a child’s life—especially those that tell a great story. Through such books, a child meets his first heroes, learns about the world as it is and as it should be, and falls in love with one of the great joys in life: reading.

As a parent of a five-year-old boy who loves to read and be read to, I have sampled a library of books. Some are no good, others very good, and many are in-between. The following twelve, however, are exceptional. All are set in a benevolent world, have interesting characters that your child will admire, and tell stories that engross and inspire. These stories also are enjoyable for parents, which is important because (if you have not discovered already) it is dangerous to read a young child a book that you’re not prepared to read many times. Happy reading!

Goodnight Moon is a classic of children’s literature.1 It is the one book almost everyone recommends, and for good reason. The book tells the story of a little rabbit observing many things in a “great green room” and then saying good night to them, one by one.

The language is melodic. There are little surprises that surprise every time and make rereading the book a joy. And the experience it provides both parent and child is one of serenity—the feeling that everything is in its proper place and all is well with the world. 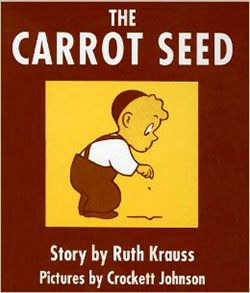 The Carrot Seed by Ruth Krauss

The Carrot Seed is another well-deserved classic.2 . . .