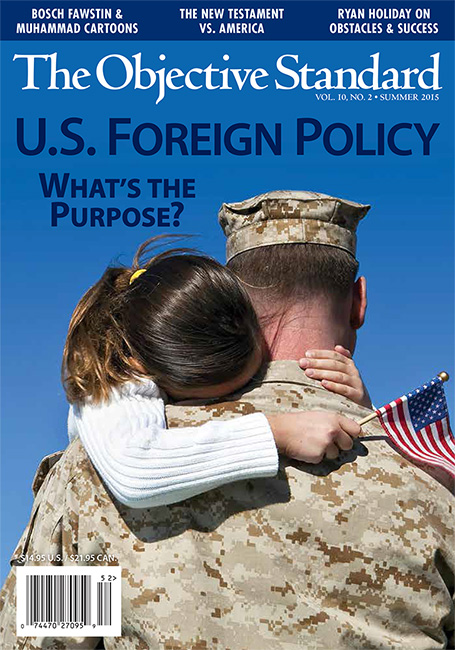 The Summer Issue of TOS 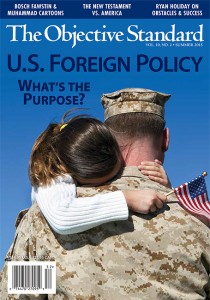 The ebook and html editions of the Summer issue of The Objective Standard have been published. (The audio edition will be posted by May 28.) If you’ve not yet subscribed to the journal, subscribe today for as little as $29 and get instant access to the current issue as well as TOS’s entire nine-year archive.

The contents of the Summer issue are:

U.S. Foreign Policy: What’s the Purpose?
Craig Biddle
Examines the aims of and arguments for “idealism” and “realism,” and presents the case for an alternative foreign policy that may be called “egoism.”

Lessons of the Armenian Genocide
Andrew Bernstein
Examines the history of and motive behind this underreported atrocity, finding the cause to be a combination of mysticism (Islam) and collectivism (racism).

A Parable for Thomas Piketty
Ari Armstrong
Visit an island of primitive fisherman, where Grok (an innovator) and Pike (an egalitarian) elucidate a fundamental absurdity of modern leftist “economics.”

Bosch Fawstin on Islam and Jihad
Interviewed by Craig Biddle
Fawstin discusses the jihad in Garland, TX, his work as a cartoonist, and what drives him to do what he does. Accompanied by three of Fawstin’s drawings.

Ryan Holiday on Turning Obstacles to Advantages
Interviewed by Kirk Barbera
Marketing strategist Ryan Holiday discusses how to turn obstacles to advantages, which is the theme of his best-selling book, The Obstacle Is the Way.

Good to Great, by Jim Collins
Reviewed by Kirk Barbera

The Obstacle Is the Way, by Ryan Holiday
Reviewed by Kirk Barbera

Start with Why, by Simon Sinek
Reviewed by Kirk Barbera

The Story of Art, by E. H. Gombrich
Reviewed by Daniel Wahl

A Most Violent Year, directed by J. C. Chandor
Reviewed by Ari Armstrong

The Theory of Everything, directed by James Marsh
Reviewed by Ari Armstrong

If you’ve not yet subscribed to The Objective Standard, you can do so here. The journal makes a great graduation gift for active-minded high-school and college graduates. Subscriptions start at just $29 and are available in Print, Online, E-book, and Audio editions.

View all articles by TOS Admin →
Good to Great, by Jim CollinsFox News, Dhimmi-America, and Your America
Return to Top