Bosch Fawstin on Islam and Jihad - The Objective Standard 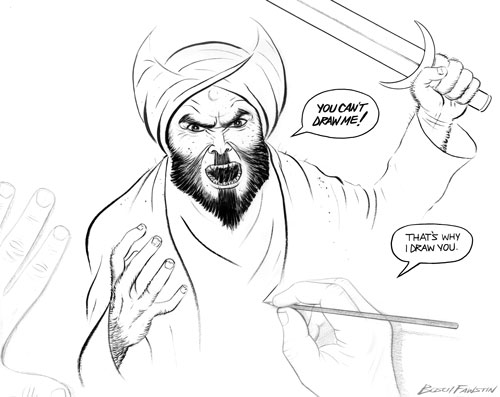 Bosch Fawstin on Islam and Jihad

Bosch Fawstin is a cartoonist, blogger, and creator of the anti-jihad superhero Pigman. Having won the recent Muhammad cartoon contest, a pro-free speech initiative sponsored by the American Freedom Defense Initiative, Bosch was in attendance at the award ceremony in Garland, Texas, when two rifle-wielding jihadists arrived to murder everyone there. Fortunately, moments after the jihadists opened fire (hitting only a security guard in the ankle), they were shot dead by a SWAT team.

As readers of The Objective Standard know, this latest assault by jihadists on freedom of speech is one in a long series, from the Iranian government’s fatwa on Salman Rushdie for depicting Muhammad in his novel The Satanic Verses; to the murder of Theo van Gogh for directing the film Submission, which depicted Islamic violence against women; to the attempted assassination of Kurt Westergaard for drawing a cartoon of Muhammad; to death threats against Matt Stone and Trey Parker for depicting Muhammad dressed as a bear; to calls for beheading Geert Wilders for producing the film Fitna, which showed that the Koran calls for violence against infidels; to the massacre of twelve people at the offices of Charlie Hebdo for satirizing Muhammad. Bosch Fawstin and the organizers and attendees of the Garland event are recent additions to this list of infidels who speak their minds in spite of Muslim threats because they know that freedom of speech is the last leg of a free (or semi-free) society.

I recently spoke with Bosch, whose drawing of Muhammad and Jesus covers the Spring 2015 issue of The Objective Standard. Three of his cartoons, including his winning entry, are included with this interview. —Craig Biddle

Craig Biddle: Thank you for taking time out of your busy schedule to chat with me, Bosch. It’s an honor to interview you. And congratulations on winning the Muhammad cartoon contest. Your drawing is brilliant and profound, in that it captures so much about the nature of the problem at hand.

Bosch Fawstin: Thank you very much; that means a lot. And I want to say kudos to you as well for publishing an issue of The Objective Standard with Muhammad on it, something very few publishers have done in the West.

Biddle: Let me begin by asking what went through your head when you heard that shots had been fired at the Garland event?

Fawstin: I was on somewhat of a high, having just won the $12,500 award and standing on a stage with Pamela Geller, Robert Spencer, and Geert Wilders. I was in the middle of an interview with CNN when my friend told me shots were fired. Now, I understand the threat we face—I’ve studied Islam as if my life depended on it after 9/11—but being in the middle of an actual jihadist attack was . . . I can’t find the words . . . surreal seems too easy, but it was just the latest reminder that this enemy—one our government could have long defeated by now—is getting to us in ways it never has before, because our government has not done its job in defeating it. 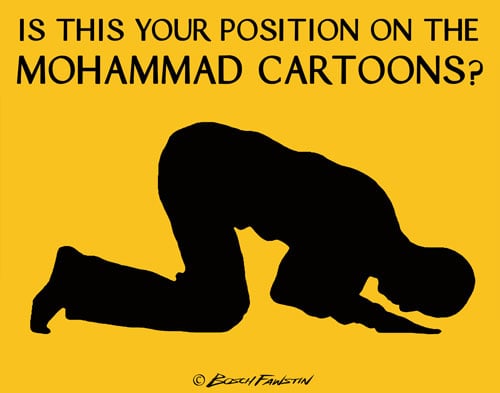 Biddle: Some people, such as Bill O’Reilly, say that publishing cartoons of Muhammad is pointlessly provocative, and that you and the organizers of the Garland event were asking for trouble. What’s your response to that?

Fawstin: Bill O’Reilly is a buffoon. He’s so far removed from the reality that we’re at war, that Islam is the motivation behind that war, and that Muslims are on the warpath, that his only concern seems to be about the feelings of Muslim “folks.” And he reserves all of his criticism for a woman (where are the “sexist” charges against her critics?), Pamela Geller, who showed more courage on that one night in Garland than O’Reilly ever has. The event was necessarily provocative to Muslims and Islamophiles who would censor us in the name of sharia—in other words, in the name of protecting them from experiencing their baseless emotions.

Biddle: Having been raised in a Muslim family, and having actually read the Koran, you are quite familiar with the religion of Islam. Why, in your view, are some Muslims bent on killing non-Muslims—especially those who criticize the religion or draw pictures of Muhammad?

Fawstin: Because unlike most nominal Muslims who are human beings first, jihadists are usually Muslims whose lives have gone sour and who are ready to throw it all away in a big bang where their lives, which have been devoid of meaning, can now be redeemed with a meaningful death. They’ve sold their soul to Allah and have been morally inverted by Islam to believe that the most heroic act they can commit is to “kill the infidels wherever [they] find them.” So in place of their mind, there’s only Islam, which dictates their lives. And that’s what led those two would-be mass murderers in Garland, Texas, to attempt to commit what, in Islamic standards, would have been a morally ambitious act.

Fawstin: What I mean is that Islam is a religion begun by the scum of the earth—I refer to “the Muslim world” as a world where the bad guy won. No matter how Muhammad and his gang tried, they couldn’t turn most of the human beings around them into monsters. Today, most Muslims—especially in the West—don’t allow and need not allow Islam to dehumanize them; they still retain their humanity. Unfortunately, they’re offered up as proof that Islam is just fine, when in fact it’s in spite of Islam that they’re not a threat to anyone.

Biddle: As you and others—including Muslims who take Islam seriously—have repeatedly shown, Islam is not a religion of peace. But some people claim that Islam is not a religion at all—because it calls for murder and other evils. The idea here is that religion is inherently a good thing, Islam calls for moral atrocities, so Islam doesn’t fit the bill. What are your thoughts on this?

Fawstin: I reject this fanciful myth that religionists are hell-bent to push. Islam is religion; it is also a political ideology—it’s a fusion of the two, and it uses its religious identity as both its shield and sword. 9/11 was an act of faith, or else Mohammad Atta and his fellow savages would never have flown those planes into the Twin Towers. They believed with everything they had that they were flying into paradise. When Bush uttered the America-crippling lie, “Islam means peace,” what he was really saying was “religion means peace.” He was a born-again Christian who was so beholden to religion that he gave a pass to Islam for religious reasons. And we’ve all paid a deadly price for it. And still to this day, there are those who bite their tongue about Islam, lest they suffer scrutiny for their own religion.

Biddle: You vehemently oppose calling the jihadists’ religion anything other than Islam—not radical Islam, not totalitarian Islam, not extremist Islam, not Islamic fundamentalism, not Islamism—just Islam. Why are you so strongly opposed to these kinds of terms?

Fawstin: Because any term other than Islam to refer to the enemy’s ideology implies that Islam as such is not the problem, that only some deviant form of it is the problem. Every time we use a term other than Islam, we’re helping Islam. I’ve gotten in endless arguments over it with friends and allies, but I believe that in the end, they’re going to see that Islam as such is the enemy’s ideology.

Biddle: You oppose Islam, but that’s a negative; that’s something you’re against. What, other than freedom of expression, are you for? What are your deeper positive values? Islam drives jihadists—what drives you?

Fawstin: Truth. Even when I was a nominal Muslim, I loved the truth, and it was that love of truth that led me away from Islam and eventually to Ayn Rand’s philosophy of Objectivism. I knew, even as a young kid, that I had to always do my best to seek the truth, to see things as they are, to be connected to reality. So by the time I found Ayn Rand’s work, I was ready to embrace her philosophy. Ayn Rand, in resistance to being called a genius, answered that she was simply more honest than most. And without Rand’s ruthless honesty, she could not have created the integrated philosophy that she did. 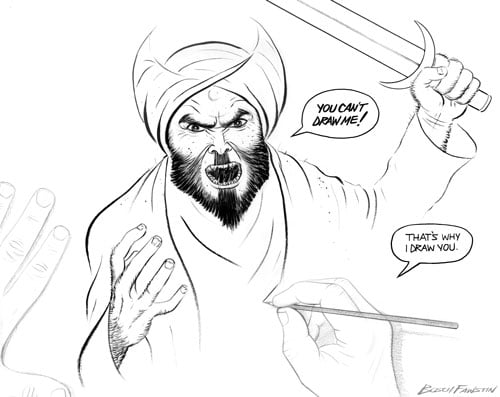 Biddle: In regard to the risks involved in speaking her mind about controversial matters, Ayn Rand said: “I’m not brave enough to be a coward; I see the consequences too clearly.” You clearly have the same attitude. What consequences do you see coming if people don’t speak up about the evil of Islam?

Fawstin: I see more attacks like the one in Garland, physical attacks against those of us who speak and write and draw in ways to which they object. I see an enemy further emboldened by what I call the scumedia, who are dying to tell offended Muslims the opposite of “I’m Spartacus”: “I’m Not Pamela Geller!” The Garland attack is a litmus test, and we have a clearer picture of who is ready to fight and who has already submitted to the enemy’s sharia restrictions.

Biddle: Our mutual friend, the late Joshua Lipana, reviewed chapter one of your graphic novel The Infidel in the Summer 2011 issue of The Objective Standard. But you’ve written other books both in that series and separate from it. And, of course, you have projects in the works. What are your main products to date? And what can you tell us about projects in the works?

Fawstin: Joshua wrote a particularly good review, and I have a blurb from him on my blog: “an engaging story driven by fundamental ideas and full of politically incorrect humor,” which I really appreciated. I began my career as a professional cartoonist in 2004 with the release of my first graphic novel, Table for One, which garnered two nominations at the Eisner Awards, considered “The Oscars” of comics. In 2009 I released my blog collection/print companion to The Infidel, called ProPiganda: Drawing the Line Against Jihad, which is the first print appearance of Pigman, my anti-jihad superhero. The Infidel is about twin brothers whose Muslim background comes to the forefront of their lives after 9/11/01. The twins represent me, as if I split myself in two, with one part of me becoming a born-again Muslim and the other a recovered Muslim, and that’s the main conflict of the story, which is echoed in the Pigman story with his battle against SuperJihad.

Biddle: Where can people view your cartoons and purchase your books? And how can they keep track of your work going forward? 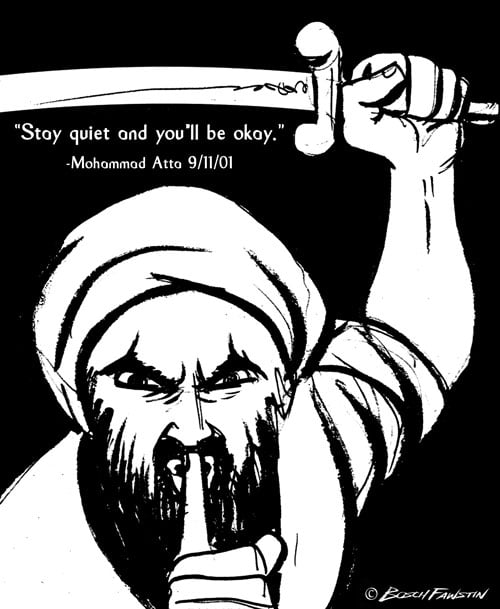 Fawstin: I have my comic books, graphic novel, and my prints on my blog at fawstin.blogspot.com. I’m currently finishing up chapter three of The Infidel, featuring Pigman. The issue is as long as the first two issues combined, fifty-five pages, and I can’t wait to get it out. I also just signed a contract with a publisher for a project that I can’t yet divulge, but that I’m very happy to be working on.

Biddle: Thank you again for your time, Bosch. Yours is a voice of reason, justice, and benevolence, and the world needs to hear it loudly and clearly. Freedom depends on people like you.