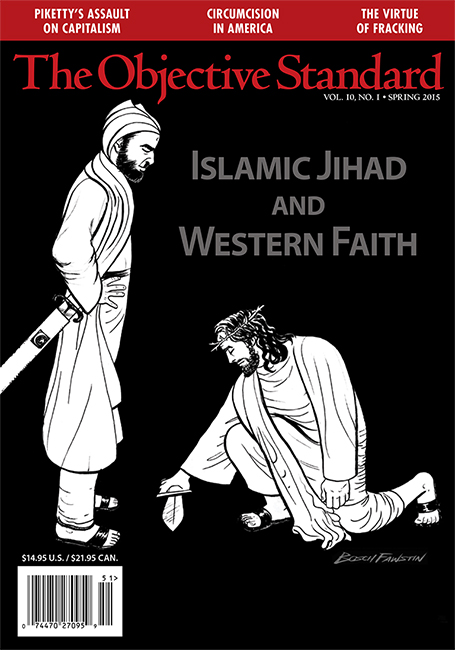 The Spring Issue of TOS 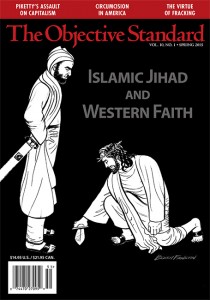 The html, ebook, and audio versions of the Spring issue of The Objective Standard have been published and are accessible to subscribers. For promotional purposes, we’ve made the html version of the cover article, “Islamic Jihad and Western Faith,” accessible for free. Enjoy the issue, and let your friends know about the journal for people of reason.

The contents of the Spring issue are:

Islam vs. Free Speech
Ari Armstrong
Discusses the conflict between the two with respect to the Islam-motivated Charlie Hebdo massacre in Paris, recounts various other Islam-motivated assaults on freedom of speech from around the world, and argues that “Muslims will continue to react violently to ‘offensive’ speech until one of two things happens.”

Piketty’s Rickety Assault on Capital
Richard M. Salsman
Dismantles and dispatches Thomas Piketty’s arguments against free markets and the principle of rights, including the “fuzzy math” in Piketty’s alleged laws of capitalism.

Circumcision in America
Joseph R. England
Traces the history of and rationales for nontherapeutic circumcision, sheds medical and ethical light on the widespread practice, and argues that Americans should take a principled stand against it.

The Moral Case for Fossil Fuels, by Alex Epstein
Reviewed by Ari Armstrong

The Frackers, by Gregory Zuckerman
Reviewed by Earl Parson

The Inhumanity of Laws against Doctor-Assisted Suicide
Michael A. LaFerrara

The Government’s Renewed Assault on Private-Sector Colleges
Michael A. LaFerrara

How Will the U.S. Government Respond to North Korea’s Apparent Acts of War?
Ari Armstrong

Is the NYPD’s Work Slowdown Good or Bad?
Ari Armstrong

If you’ve not yet subscribed to The Objective Standard, you can do so here. The journal also makes a great gift for your active-minded friends. Subscriptions start at just $29 and are available in Print, Online, E-book, and Audio editions.

Enjoy the issue, and be sure to let your friends know about the journal for people of reason.

View all articles by TOS Admin →
Stuff Matters, by Mark MiodownikDr. Avijit Roy: A Man of Reason Murdered by Jihadists
Return to Top