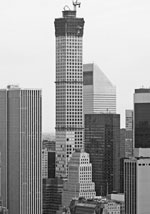 Richard Berenholtz on Photographing the Rise of 432 Park Avenue 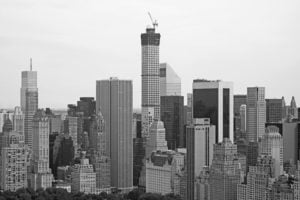 Renowned photographer Richard Berenholtz has been commissioned to document the construction of 432 Park Avenue, a building that, at nearly 1,400 feet will be the tallest residential tower in New York and the Western Hemisphere. Berenholtz has photographed the rise of this ultra-luxury, mixed-use apartment building since shortly after its groundbreaking in September 2011, and he will see the project through to its completion in 2015.

A graduate of the Columbia School of Architecture, Berenholtz worked for ten years as a designer for major New York architectural firms, including I. M. Pei & Partners. In 1984, he turned to full-time professional photography, with an eye particularly toward cityscapes and architecture. He has had six books published, including Manhattan Architecture, New York Deco, and New York New York, which has sold more than 100,000 copies. His website is photographynewyork.com.

I recently talked with Berenholtz about his work on 432 Park, Manhattan’s ever-changing skyline, and his fascination with the construction process. —Joseph Kellard

Joseph Kellard: Richard, you are my favorite photographer of New York’s world-famous skyline and architecture, so it is a pleasure for me to speak with you. Thank you for this opportunity.

Richard Berenholtz: The pleasure is mine.

Kellard: What has the experience been like for you to photograph and chronicle the rise of 432 Park Avenue? 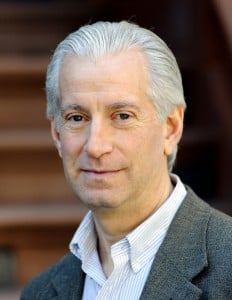 Berenholtz: Well, of course, it's still going on and will be for the next year or so. I was very excited to receive this commission and to take on the very interesting, and rather unique, challenge of photographing a major building under construction from start to finish, as it was something I had never done before. Since Harry Macklowe, the co-developer of 432 Park, wanted this project to be documented in black and white, it also allowed me to return to my original fine art roots, before most of my work was done in color. The nature of the project also involves the human element, photographing the workers at their varied tasks. Since almost none of my work involves photographing people, this was also something quite different for me. So in many respects this has been, and continues to be, a very exciting project.

Kellard: How would you say the city’s skyline has changed from when you first started to photograph it professionally thirty years ago?

Berenholtz: “Immensely,” I guess, would be the appropriate word. Of course there were the Twin Towers, which for the first seventeen years of my career were the subject and focus of so many of my images. And then, on September 11, 2001, through a senseless act of terrorism, the skyline of New York City, and the lives of the people who live here, were forever changed.

But for the thirty years that I have been documenting this incredible and constantly changing city, I have seen small and older buildings go down, only to be replaced by new and larger (often much larger) ones, which now include the long overdue One World Trade Center (One WTC), the “Freedom Tower.” Sometimes these new skyscrapers are, at least in my opinion, a benefit to the overall appearance of the skyline, and at other times they interrupt and block the view of the great classical towers that were once the dominant and recognizable elements of that same skyline. Progress is not always for the best in this regard.

Kellard: Why will 432 Park Avenue be “a big asset to the skyline,” as you’ve said, and how might the skyline change now that many of New York’s taller buildings will be residences instead of office buildings?

Berenholtz: It is certainly true that most of the taller buildings presently going up in New York are residential. I guess that the city is now becoming, more and more, a place to live as well as work, especially for those who can afford it. 432 Park Avenue, by the architect Rafael Viñoly, is a beautifully designed and elegant tower, whose material and slenderness cause it to be unobtrusive. It is the second of many new, tall residential towers that will be rising between 53rd and 59th streets in Manhattan. I have recently been photographing the skyline—specifically from the various bridge and tunnel entrances to the city in New Jersey, Queens, and Brooklyn—and 432 Park, although not yet completed, will indeed add to the impressiveness of the skyline of the greatest city in the world.

Kellard: You’ve said that what fascinates you about the construction process is the combination of the science of architecture with the art of architecture, as well as the hundreds of people on a site performing different tasks that all come together to build a skyscraper. Would you elaborate on your fascination with these factors?

Berenholtz: Hundreds of workers, performing different jobs, and somehow it all comes together to create something amazing. It's hard to put into words, you need to see it up close to really appreciate it. The technology of design and construction, along with the use of computers, now allows for the creation of buildings, in both form and height, that could not have been done in the past. Even as an architect, thirty to forty years ago, I couldn't dare conceive of the shapes, heights, and proportions that we are presently seeing.

Kellard: Your career began in architecture. What sparked your transition from a designer of buildings to a photographer of buildings? 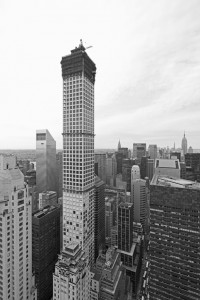 Berenholtz: There was no plan. It was a totally unexpected series of events. I did not own a camera until I entered architecture school, where I thought I might need or want to photograph buildings. It became a hobby, and eventually a passion, and I worked almost exclusively in black and white. My subjects were buildings, but also landscapes, which I still love to do. I had three one-man shows of my work at New York City galleries. After about ten years in architecture, I was between jobs and a friend who was a creative director at a large ad agency asked if I would like to go around the country photographing InterContinental Hotels. I jumped at the chance, loved being independent and working for myself, and that was the start of a new career.

Kellard: Will your photos of 432 Park form the basis for a new book? What projects will you be working on in the future?

Berenholtz: There has already been a beautiful book of photographs of the foundation portion of the project, which was designed by the late and brilliant Massimo Vignelli. He was someone whom I knew and admired when I was an architect, and it was a dream come true to work with him on this book. There has been talk of doing another book documenting the remainder of the project, but nothing definite yet.

As for new projects, I'm always working on a number of things. At the moment, some of those include 220 Central Park South for Vornado, and One Manhattan Square at the foot of the Manhattan Bridge for Extell. I am also still involved in One WTC as the designated photographer. Also, Rizzoli has recently published an updated mid-sized edition of my book New York New York. It has fifty-one new images, and to the best of my knowledge it is presently the only book available with numerous photographs of the completed One WTC or Freedom Tower.

Kellard: Again, thank you for taking time to speak with me about your work. I look forward to your future photographs and projects.

Berenholtz: Thank you, I enjoyed it.