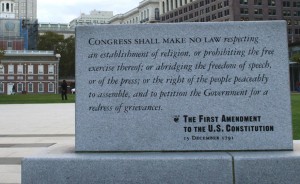 Marking the second important court ruling within a week defending freedom of speech in Colorado, the Tenth Circuit court ruled yesterday that Citizens United need not comply with Colorado’s campaign reporting and disclosure laws in releasing and distributing a documentary—Rocky Mountain Heist—criticizing Democrat politicians and activists.

The Colorado Secretary of State shall treat Citizens United, in its capacity as a producer and distributor of films, the same as a broadcast facility or publisher of a print periodical for purposes of the exemptions from the reporting and disclosure requirements of Colorado election law. . . . In particular, the Secretary shall treat the film Rocky Mountain Heist as excluded from the definition of electioneering communication and treat expenditures for the production and distribution of the film as excluded from the definition of expenditure.

Last week, U.S. district judge John Kane ruled that the Coalition for Secular Government need not comply with the reporting and disclosure requirements in distributing a paper critical of an anti-abortion “personhood” measure on Colorado’s ballot. (Diana Hsieh and I coauthored that paper.)

Although the new ruling on net is a substantial victory for the right to freedom of speech, it draws an arbitrary distinction between protected and unprotected speech. The court declared that the state may force Citizens United to follow its byzantine reporting requirements and disclose its donors if it runs advertisements for the documentary that “name a Colorado candidate or advocate the election or defeat of a Colorado candidate.”

Still, despite the limited scope of the Tenth Circuit’s ruling, it substantially protects freedom of speech and for that reason constitutes a significant win for advocates of individual rights.

View all articles by Ari Armstrong →
Letter to the Editor
Victoria Osteen, Her Christian Critics, and the Rational AlternativeFrom the Editor, Fall 2014
Return to Top