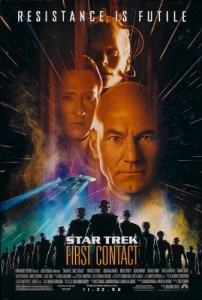 Imagine a future in which humans rove the galaxy in starships; colonize the moon, distant planets, and space stations; and radically expand their knowledge of the universe. Star Trek: First Contact invites us to imagine just such a future, and it does so in the context of a nail-biting action story pitting the “next generation” crew of the Federation ship Enterprise against mankind’s most frightening foes of their fictional universe: the collectivist Borg, who rasp, through cybernetic implants, “Resistance is futile.”

Although each of the four films involving The Next Generation (the crew led by Captain Jean Luc Picard) has its merits, First Contact rises above the rest in its storytelling. In the film, the Borg first attack Earth and then send a probe back to their past (our future) to hinder mankind’s development and make Earth easy prey for the Borg.

What is the singular event the Borg hopes to stop? It is the first human space flight involving “warp” (faster than light) travel, something that (in the world of Star Trek) takes place on April 4, 2063. That the pivotal event of the film is a major technological advancement says a lot about the spirit of the franchise. . . .