The Martian, by Andy Weir 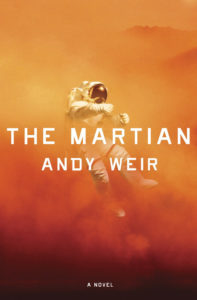 Imagine you’re on a mission on Mars. Your space suit, not to mention your body, was punctured by an antenna blown loose by a raging sandstorm. Luckily, although the blow knocked you unconscious, the blood from your wound helped seal the hole, so you didn’t die from lack of oxygen. Now that you’re awake and moving again, you realize an unfortunate fact: Your entire crew, reasonably thinking you died and facing the dangerous storm, took off in the MAV (Mars Ascent Vehicle) and left you behind. You are now totally alone on a planet hostile to life. Your food supplies are running low, and you have no obvious way to communicate with Earth, much less to get home. What do you do?

If you’re Mark Watney, the main character of Andy Weir’s near-futuristic, science fiction novel The Martian, you carefully think about what you need to do to stay alive and get rescued, and then you methodically do it. Watney’s training as a botanist and a mechanical engineer gives him the skills he needs to survive; and his fierce desire to live, his fortitude, and his quirky sense of humor give him the strength of will to do it.

Fortunately, Watney’s own mission and various other missions to Mars have left a number of important tools at his disposal. He has a reasonably well-stocked Hab (basically, a giant pressurized tent), some solar cells, several functional space suits, two functional rovers, duct tape, glue, and various other machines and items. Oh, and he has some live potatoes, which his crew was supposed to have cooked for Thanksgiving dinner. Don’t forget the potatoes! They become crucially important in Watney’s efforts to survive.

The story revolves around Watney coming up with clever ways to keep sucking air and consuming calories, then figuring out how to travel some two thousand miles across the cold Martian landscape to the site of a future Mars landing. Meanwhile, NASA and Watney’s crewmates eventually learn he’s still alive, so they seek to communicate with him, to help him remain alive, and to rescue him. So although Watney is the dominant figure of the story, Weir populates his novel with other colorful figures on Earth and in the ship traveling back to Earth. . . .

View all articles by Ari Armstrong →
Letter to the Editor
The Rape of the Masters, by Roger KimballEdge of Tomorrow