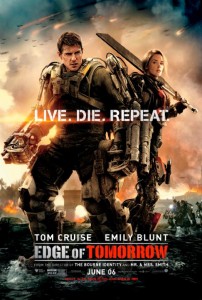 Edge of Tomorrow is the only film I know of in which a main hero shoots another hero in the head—and it’s hilarious. If you can’t imagine how such a scene could be riotously funny, then let the film’s storytellers help you imagine it.

Although the film’s sci-fi premise is standard fare—it involves aliens trying to take over the Earth—the filmmakers tell an intriguing story based on that premise, a story filled with intense wartime action, suspense, drama, and laughs.

In some ways, Edge of Tomorrow blends the stories of Independence Day, in which aliens invade the earth and humans fight back; and Groundhog Day, in which a man relives the same day over and over. But Edge combines these story lines in a fresh way that focuses on the characters; the film never feels derivative. The basic plot is that soldier William Cage (portrayed by Tom Cruise) must repeatedly try to find and destroy the alien entity organizing the assault; and to do this he must seek the help of Sergeant Rita Vrataski, a military hero (portrayed by Emily Blunt). . . .

View all articles by Ari Armstrong →
Letter to the Editor
The Martian, by Andy WeirReview: Star Trek: First Contact
Return to Top