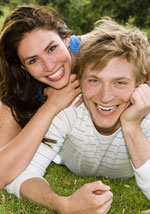 Contra Colorado Pastor, Sex Among Older Teens Can Be Moral and Healthy

“Teen Birth Rate Drops 57% Over Two Decades,” states a recent headline from the Wall Street Journal. The news is based on data from the Center for Health Statistics for teens ages 15 to 19, from the years 1991 through 2013. In Colorado, the Journal reports, births among this age group have dropped by 39 percent since 2007.

That’s great news, right? Not according to Colorado pastor Bob Enyart (a spokesman for Colorado Right to Life), insofar as the result is due to increased use of contraception. The BBC reports:

"When you teach children that they're animals—that they have evolved from pigs and dogs and apes—then they act like animals," says Bob Enyart. . . .

Enyart says offering IUDs and other devices sends the message that teenagers can "have all the sex you want.” He believes it has led to the spread of sexually transmitted diseases (STDs) and is immoral.

Consider some of the absurdities of Enyart’s remarks. To begin with, the main group under consideration is not thirteen and fourteen year olds, but older teenagers, including legal adults. Further, responsible people having sex do not thereby act “like animals”; sex using contraceptives is not the same thing as promiscuous sex; using an IUD does not preclude one from preventing STDs; evolution does not say that humans evolved from “pigs and dogs and apes”; and sex among older teens is not necessarily destructive for them, but can be greatly life-serving. (Enyart’s remarks about God’s alleged “image” are totally arbitrary, as there’s no evidence that God exists, much less that he doesn’t want teens to have sex.)

Apparently Enyart’s policy for older teens—and presumably for all unmarried adults—is sexual abstinence. And then, if a woman gets pregnant unintentionally, whether because her birth control fails or for any other reason, Enyart wants government to force her to carry her embryo to term. Indeed, Enyart has openly called for the death penalty for women who obtain an abortion.

Contra Enyart’s faith-based absurdities, sex among responsible individuals—including among responsible older teens (the precise appropriate age depends on individual maturity)—is a healthy and moral part of life and one of its great joys. Of course, people can have sex in unhealthy, destructive ways (and that goes for married couples as well as unmarried ones). Just as the the fact that some people eat in unhealthy ways does not alter the life-serving nature of food, so too the fact that some people engage in harmful sex does not alter the life-serving nature of sex. People who are mature and responsible enough to have sex should pursue it passionately and enthusiastically, and not let mystical dogmas stand in their way.