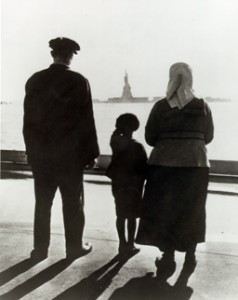 Although in today’s context questions regarding immigration are complex matters involving the welfare state, laws governing citizenship, threats of cross-border crime and terrorism, and various other issues, the proper principle guiding any thinking about immigration is—as with every political issue—that of individual rights. With that in mind, let’s explore some of the various misconceptions about a rights-respecting immigration policy.

Myth: “A rights-respecting immigration policy permits criminals and terrorists to enter the country.”

Reality: Obviously, to protect the rights of its citizens and residents, government must keep out criminals and terrorists—and respond with appropriate defensive force if such are found among immigrants already here. Far from calling for unguarded borders, a rights-respecting immigration policy calls for government to tightly control the borders, with specific legal points of entry and screening processes, allowing in only people whom the government has no reason to believe pose any threat to U.S. citizens.

Myth: “A rights-respecting immigration policy entails government provision of welfare to immigrants and permits them to squat on public or private lands.”

View all articles by Ari Armstrong →
Letter to the Editor
Government Should Neither Finance Colleges Nor Dictate What They TeachContra Senator Udall, America Needs a “Not the Government’s Business Act”
Return to Top