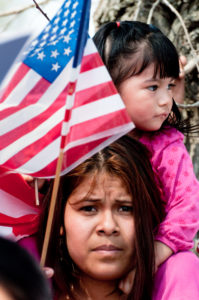 What do advocates of open immigration have to say about the current immigration crisis involving children from Central America? It’s a fair question, and one I’m happy to answer. Let’s first review the essential facts (as reported by NPR):

Since October, more than 52,000 children—most from Central America and many of them unaccompanied by adults—have been taken into custody. That's nearly double last year's total and 10 times the number from 2009. . . .

A study by the U.N. High Commissioner for Refugees found that 58 percent of the unaccompanied children are motivated by safety concerns, fearing conditions back home. Their home countries have been racked by gang violence, fueled by the drug trade. . . .

Central American families may have been misled by rumors—often spread by profit-seeking smugglers—that their children will readily be reunited with relatives already in the U.S. . . .

U.S. policy allows Mexican child migrants to be sent back quickly across the border. However, under a 2008 law meant to combat child trafficking, the Trafficking Victims Protection Reauthorization Act, children from Central America must be given a court hearing before they are deported (or allowed to stay). Given the huge backlog of cases, they may have to wait years for a hearing. . . .

In the meantime, as many as 90 percent of the children stay with relatives or family friends already living in the U.S., with the rest placed in foster care, according to the Migration Policy Institute.

First consider a point not directly related to immigration policy. To the degree that the problem is caused or exacerbated by drug violence in Central American countries, it is largely the fault of the U.S. government, which, by waging its rights-violating “war on drugs,” helps to create and perpetuate an extremely violent black market.

Regarding immigration policy, government has no moral right to compel U.S. citizens to finance the care of immigrants, . . .