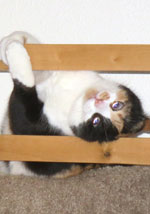 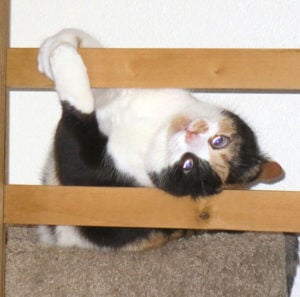 A 1966 letter by Ayn Rand about cats recently turned up in the news, apparently showing up first in a tweet by Mallory Ortberg, then in a blog post by Marina Galperina for Animal and again in a piece by Caroline Moss for Business Insider. Here is a selection from the letter, addressed to the editor of a magazine about cats:

You ask whether I own cats or simply enjoy them, or both. The answer is: both. I love cats in general and own two in particular.

You ask: “We are assuming that you have an interest in cats, or was your subscription strictly objective?” My subscription was strictly objective, because I have an interest in cats. I can demonstrate objectively that cats are of a great value, and the charter issue of Cat Fancy magazine can serve as part of the evidence. (“Objective” does not mean “disinterested” or indifferent; it means corresponding to the facts of reality and applies both to knowledge and to values.)

Galperina mocks Rand for her sweet and perfectly sensible letter:

Big up to Rand for even responding to bait—tying objectivism to cats is like applying the String Theory to jealousy. A stretch. And yet, she manages to do so, in the driest way possible. Because “values”—even the ones found in a cuddly, fuzzy, lovable kitty—are purely objective, because Ayn Rand is objectively stating them. Unlike the emotions of people that sway their moral values to care for other, less fortunate human beings, chortle chortle, how delightful.

Far from showing any problem with Rand’s letter, Galperina’s remarks show that Galperina does not understand what an objective value is. (Her comments also show that she’d rather smear Rand than present her ideas fairly.) . . .

View all articles by Ari Armstrong →
Letter to the Editor
Homosexuality, the Bible, and Rational MoralityNureyev Danced Free of Communism and Lived
Return to Top