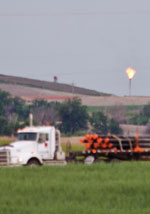 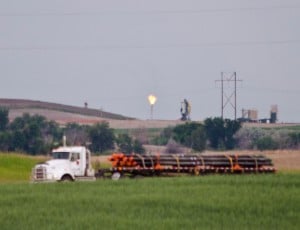 A recent article by the Associated Press, “Oil Boom Bringing More than Construction,” describes the revitalization of Watford City, North Dakota—revitalization made possible not only in that town but in many others as well, by the fracking revolution.

The energy production made possible by fracking has attracted thousands of daring and ambitious Americans to previously unpopulated regions of North Dakota. “Luke Allen, who moved here last summer to start his dental practice, finds the pioneer spirit exhilarating,” the AP reports. Allen described the spirit of his new town as follows:

It has the same buzz that big cities have. It has the energy but it comes from a different source—the industry and the work. . . . No matter what hour of the day or day of the week, I can see the semis rolling. . . . It’s exciting to me. I can just feel it in the air.

Allen remarked that one couple he knows “went from a home in a tent to a camper to sharing a home to now having their own place. Where else can you do that?”

In America today, where many regions suffer economic stagnation, entire states enforce bans on fracking, and the federal government distributes food stamps at record levels, North Dakota provides a refreshing glimpse of the freedom that made America possible and of the pioneering American spirit—that of people determined to make the most of their lives.