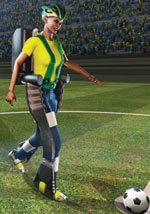 At World Cup Opening Ceremony, a Paraplegic Will Walk—Thanks to Miguel Nicolelis and Co 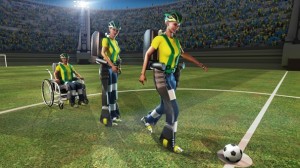 During the opening ceremonies for the World Cup June 12, a young paraplegic will walk onto the field in front of 65,000 fans and kick the first ball of the event. How? By means of a bionic exoskeleton, which he will control with his mind.

The machine was created by Duke University neurologist Miguel Nicolelis and a team of researchers. Nicolelis first envisioned such a bionic suit in 2003, when he was working with primates on brain machine interfaces (BMI). A few years later, Nicolelis had demonstrated that, via electrodes, the brain of a monkey could generate movements in a robot. He then gathered an international coalition of scientists and engineers to develop a mind-controlled bionic suit that could enable human paraplegics to walk. He called it the Walk Again Project. By 2009, Nicolelis was confident that he would soon have a prototype BMI walking device.

A native of Brazil and an ardent fan of soccer, Nicolelis approached the International Federation of Association Football (FIFA) about the possibility of unveiling his bionic suit at the 2014 World Cup. Nicolelis explains:

Sports can be a huge avenue to reach out to people that would never actually pay attention to science news. I always wanted to show kids in Brazil how important science can be for society.

Needless to say, the FIFA was delighted with the idea.

Since last November, Nicolelis’s team has been working with patients from the Association for Assistance to Disabled Children in Sao Paulo, Brazil, training them to use the bionic exoskeleton. By the end of May, one of these patients will be chosen to walk to the center of Arena Corinthians stadium in Sao Paulo and kick off the World Cup.

Nicolelis hopes that showcasing this vital new technology will give us "the possibility to dream with this reality because it is already working experimentally." Further, he believes the event will help communicate the idea

that science and technology can be agents of social transformation in the whole world, that they can be used to alleviate the suffering and the limitations of millions of people.

Thanks to the astoundingly innovative work of Nicolelis and his team, millions of people watching the World Cup will witness man taking a great step forward—in the form of a paraplegic walking by the power of his own mind. Cheers to these great men and women of science.

View all articles by Derrick Nantz →
On Memorial Day, Let’s Lift Our Heads and SpeakA Report on the “Liberty, Free Markets, and Moral Character” Conference
Return to Top