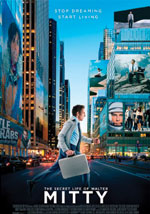 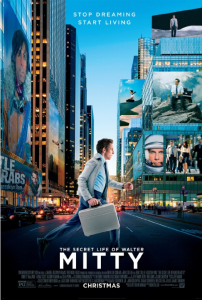 The Secret Life of Walter Mitty, a film recently released to DVD, is the story of a man in search of self-esteem. Rather than appreciate the joys and challenges of his work managing film negatives for Life magazine, ask a woman he likes out on a date, go on adventures, or stick up for himself when insulted or mistreated, Mitty frequently “zones out” and vividly imagines himself doing heroic things and going to interesting places.

All that changes when a crucially important film negative goes missing, and for the first time in many years, Mitty takes real action: He ventures across the globe in search of the missing negative. Along the journey, he rediscovers what it means to love his life.

Although its humor is sometimes overly slapstick, the film features some poignant and uplifting moments in which Mitty overcomes a seemingly insurmountable obstacle or learns (or remembers) something important about himself. The moment when Mitty first meets the photographer who produced the negative in question is particularly inspiring and, for me, the highlight of the film.

Ben Stiller did a fine job directing the film, working from a screenplay by Steve Conrad. Stiller also ably portrays an alternately vulnerable, sensitive, and strong-willed Mitty. And Sean Penn delivers a memorable performance as the photographer.

As originally presented in a 1939 short story by James Thurber, Walter Mitty never got past daydreaming to living. In the new film, Mitty transforms his life from that of a daydreamer to that of a value-pursuer. In the process, he discovers what it means, not merely to exist, but to truly live.

View all articles by Ari Armstrong →
Letter to the Editor
“Citizens for Tax Justice” vs. Rational PatriotismThe California Murderer’s “Selfishness Without a Self”
Return to Top