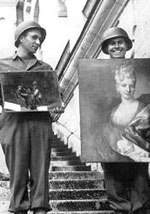 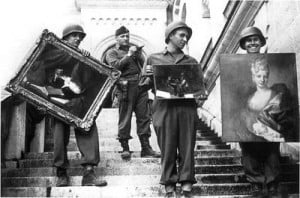 Shockingly, until the release of the recent film The Monuments Men, I had never heard of the Monuments, Fine Arts, and Archives division of allied forces that, during World War II, recovered millions of stolen works of art and culture, saving many thousands of masterworks from destruction by the Nazis and many more from confiscation by the Soviets.

As Jim Morrison writes for Smithsonian.com, the Monuments Men saved such cultural treasures as The Adoration of the Lamb by Jan van Eyck and Madonna of Bruges by Michelangelo. Among many other operations in which the unit was involved, it assisted with the recovery of artworks stored by the Nazis in the Austrian salt mines of Altausee.

The next time you view one of the many artworks saved by (or with the help of) the Monuments Men—whether Michelangelo’s Madonna, da Vinci’s Mona Lisa, da Vinci’s Portrait of Cecilia Gallerani, Rembrandt’s 1645 Self Portrait, Vermeer’s The Astronomer, or countless others—remember the heroism of the men and women who worked to save such treasures.