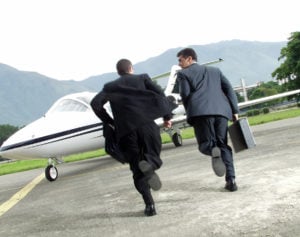 An increasing number of companies founded in the United States are leaving the country because of high corporate tax rates, and some Americans are blaming the businesses. For example, Robert McIntyre, director of Citizens for Tax Justice (sic), accuses these companies of “putting profits over patriotism.” But it is McIntyre, not the companies in question, who is being unpatriotic—as judged by the standards of America’s founding document, the Declaration of Independence.

Consider some facts regarding U.S. taxes. The United States has the highest corporate income tax rate among the thirty-three industrialized nations comprising the Organization for Economic Cooperation and Development (OECD). Whereas in the United States the combined federal and state tax rate averages 39.1 percent, in OECD nations it averages 25 percent.

Because of high U.S. tax rates, many U.S. companies are establishing legal residency overseas “to shield income earned outside the U.S. from American taxes.” Eaton, Chiquita Brands, and Applied Materials have already done so, and many more are “eager” to follow suit, according to the Journal.

Where is the patriotism—or, more fundamentally, the justice—in tax laws that forcibly seize so much wealth as to make it too costly for businesses to stay in America?

Rational patriotism does not mean throttling productive citizens for the sake of politicians and bureaucrats. Rational patriotism in America means loyalty to what America stands for: the inalienable rights of individuals to life, liberty, property, and the pursuit of happiness.

Rational Americans do not condemn corporations for self-interestedly moving headquarters to another country to reduce the unjust burdens of U.S. taxes. Rational Americans—those who recognize that the protection of individual rights is a requirement of human life—instead demand that Congress reduce corporate taxes, with the ultimate, long-term goal being their abolition. If Congress were to substantially reduce corporate taxes, businesses would again clamor to move to America rather than away from it.

View all articles by Michael A. LaFerrara →
Letter to the Editor
Leftists Shamefully Exploit California Murders on Behalf of CollectivismWalter Mitty Learns to Love His Life
Return to Top