Review: The Conscience of the Constitution, by Timothy Sandefur

The Conscience of the Constitution: The Declaration of Independence and the Right to Liberty, by Timothy Sandefur. Washington, DC: Cato Institute, 2014. 200 pp. $24.95 (hardcover). 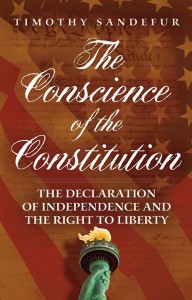 While the principles of liberty on which America was founded are under attack from so-called liberals and conservatives alike, and while expanding abuses of government power are too vast and complex for most Americans to fully follow, books by rational, knowledgeable professionals clearly and concisely explaining the problems and offering solutions are of immense value. Timothy Sandefur’s The Conscience of the Constitution: The Declaration of Independence and the Right to Liberty fits this bill.

Sandefur, a principal attorney at the Pacific Legal Foundation and an adjunct scholar at the Cato Institute, bases his latest work on an underappreciated idea in American legal thinking. It is the idea that the Declaration of Independence—understood as a formal, legal, diplomatic document issued by the representatives of thirteen British colonies to the king of England—is part of the law of the land, just as are the Constitution and the Bill of Rights. In fact, argues Sandefur, the Declaration used to be seen as the “conscience of the Constitution,” and reviving this understanding of its position in the framework of U.S. law will go a long way toward establishing the moral and political context within which lawyers, judges, and Supreme Court justices should argue and interpret constitutional law.

Sandefur’s thesis is controversial and is not likely to be well received in modern courts and law classrooms. Most law schools teach students to view the Declaration as a mere manifesto or letter of aspiration. But Sandefur wages a compelling intellectual defense of the Declaration-as-law on two fronts: against leftists, who have ridiculously claimed that the document was drafted as a wink-and-nod effort by elite white men to put down minorities and the lower classes; and against conservatives such as Russell Kirk and neoconservatives such as Irving Kristol who, afraid of its “natural rights” language, dismiss the ideas of the Declaration and characterize it as an underhanded “ploy to lure the French” into conflict with the English (p. 14).

Sandefur, pointing out the baseless nature of such criticisms, puts forth a strong argument for holding the Declaration as law and highlights the Founding Fathers’ own understanding of it as such. Among other things, he shows the inconsistency of dismissing from U.S. law the Declaration but not other founding documents; and he argues that, “[a]s a resolution approved unanimously by the Continental Congress, a body whose other resolutions have never been regarded as anything less than law, the Declaration obviously had legal consequences, separating the United States’ legal system from that of Great Britain” (pp. 14–15). He also points to the inconsistency of legal scholars who incorporate the Declaration procedurally but not substantively, noting:

American law still takes July 4, 1776, as the starting point of the nation’s political autonomy. . . . In fact, beginning with Nevada in 1864—the first state admitted after the southern states seceded—every new state has been required, as a condition of admission into the union, to draw up a constitution consistent not only with the federal constitution but also with the Declaration of Independence. (p. 15)

Sandefur repeatedly and effectively recruits the Founders themselves: “Lawyers of the Founding Era, such as Thomas Jefferson, James Wilson, and others regarded the Declaration as law . . . as did later lawyers and government officials, including Abraham Lincoln.” In light of such evidence, Sandefur writes, “It is hard to understand why we would deny the Declaration as standing law” (p. 15).

Sandefur also anticipates and addresses objections to his argument, granting that . . .