Peyton Manning and What Matters 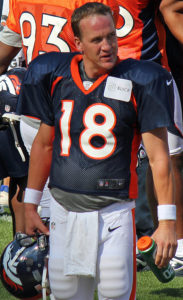 For members and fans of the Denver Broncos and the New England Patriots, today’s AFC championship football game is nearly as important as the Super Bowl. Two of the greatest quarterbacks of all time—Peyton Manning and Tom Brady—will lead spectacularly successful teams in one of the greatest athletic competitions of the year.

For Manning, however, it was almost a game—and a season—that never was.

For the 2009 season when he played for the Indianapolis Colts, “Peyton Manning became the first player to win The Associated Press NFL Most Valuable Player honor four times,” ESPN reports. But the high-impact sport had taken its toll on his body. In February of 2010, Manning underwent surgery for a pinched nerve. Then, in May of 2011, he had surgery—and a follow-up surgery—for a herniated disc in his neck. Then, in September of the same year, he had surgery to fuse vertebrae in his neck. Early in 2012, the Colts, worried about his health, released him.

An anecdote reported by the Washington Post indicates just how close Manning was to premature retirement. Between surgeries, Manning worked out with his friend Todd Helton, then a Colorado Rockies baseball player, at the team’s facilities:

The first pass Manning threw post-surgery was to Helton, and they were so concerned with privacy that they went to an underground batting cage beneath the Rockies’ stadium. Helton took up a position about 10 yards away and held out his hands. Manning reared back, and threw.

“The ball nose-dived after about five yards,” Manning says.

It didn’t even make it halfway to Helton before it hit the ground. Helton burst out laughing—he thought Manning was joking.

But Manning was not ready to quit. He signed with the Broncos and underwent rigorous rehabilitation training with the team’s staff, as Sports Illustrated describes in its feature praising Manning as Sportsman of the Year.

SI describes several of Manning’s key attributes: He works extraordinarily hard and has always done so; he demands excellence from himself and his teammates; he applies his mind fully to the task in front of him, whether it is studying an opposing team or recovering from surgery; he is very generous and thoughtful toward his colleagues and his fans; and he engages with or encourages fans struggling with their own health problems.

Regarding Manning’s mental focus, legendary quarterback John Elway, now an executive with the Broncos and instrumental in signing Manning to the team, said (as SI reports):

[Quarterback has] always been a cerebral position, but Peyton made it more cerebral. He was the first one to get in the hurry-up [offense], figure out the coverage at the line, find the right play against the coverage and call everything himself. He really started the no-huddle. Now everybody does it.

Manning’s success in his career—including his success in recovering from injuries and surgeries—is an inspiration.

As SI reports, Jon Torine, one of Manning’s strength and conditioning coaches said: “When Peyton Manning dies, this is what they ought to write on his gravestone: it all mattered to me.”