In his State of the Union address last night, Barack Obama predictably advocated more federal spending on programs including K–12 education, pre-kindergarten education, transportation, high-tech “hubs,” business “loans,” scientific research, subsidies for solar energy and the like, job training, subsidies for the unemployed, and government-backed investment accounts. He also called for stiffer regulations for automotive fuel use and a higher minimum wage. 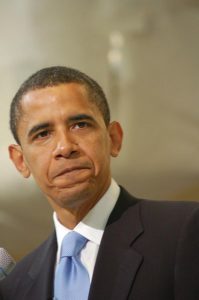 We get it, Obama: You love federal controls of our wealth, of our children, of our businesses, of our lives.

Although Obama did vaguely refer to “individual dreams” and “individual achievement,” one phrase ominously but unsurprisingly absent in his speech is individual rights.

True, Obama referred to “everyone’s right to vote” (a right that, contra Obama’s philosophy, makes sense only under a constitutionally limited government that protects individual rights), and he mentioned “the principle that all people have the right to express themselves freely and peacefully.” (He did not mention the NSA’s spying on Americans’ communications nor the IRS’s crackdown on conservative speech.)

Why does Obama mention rights only vaguely and utterly detached from the principle of individual rights?

Under a rights-protecting a government, each individual is free to earn—and keep—as much as he is able. Some people work smarter or harder to earn wealth; some develop or market innovative products; some invest their wealth more intelligently than do others. Often such people earn spectacular wealth—and when they do, they earn it.

When government seeks to reduce inequality of wealth—by force, the essence of government—it does so by confiscating the wealth of those who have more and giving it to those who have less. Alternately, the government simply throttles or blocks people’s ability to earn wealth, thereby making the more able equal to the less able. (Of course, in some cases the government itself causes greater inequality through its rights-violating policies, but that’s a matter for another day.)

The reason Obama has helped ring up a $17 trillion national debt, the reason he advocates myriad federal controls of the economy, is that he cares fundamentally about using the power of the federal government to cut down people of ability, not to protect individual rights.

Granted, some of Obama’s policies effectively reduce government coercion, as by enabling gay marriage or freer immigration. But the fact that these policies would better-protect individual rights is accidental for Obama. If the policies did not somehow reduce inequality of outcomes (or appeal to the voting base of the Democratic Party), Obama would not support them.

To achieve a government that consistently recognizes and protects the rights of each individual, Americans must reject the notion that government exists to reduce inequality of wealth or opportunity, and champion the fact that each individual equally has the right to his own life, liberty, and pursuit of happiness.