The Libertarian Case for Legalized Plunder 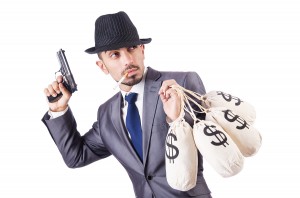 I’m often asked why I make such a big deal about the libertarian MO of ignoring or denying the philosophic foundations of liberty. I give my general reasons in “Libertarianism vs. Radical Capitalism,” in which I provide several examples showing that the attempt to defend a free society apart from the principles that underlie and support such a society is hopeless. I discuss a related example in “Libertarians Fiddle while Rome Burns.” Here is another example.

Over at Cato, Matt Zwolinski of Bleeding Heart Libertarians is arguing—with help from other libertarians, including Milton Friedman and Friedrich Hayek—for a “Basic Income Guarantee” (yep: BIG).

As Zwolinski explains, the BIG program “involves something like an unconditional grant of income to every citizen. . . . ‘Unconditional’ here means mostly that the check is not conditional on one’s wealth or poverty or willingness to work.” So “everybody gets a check each month . . . [and] income earned on top of the grant is subject to taxation at progressive rates, but the grant itself is not.”

Zwolinski attempts to justify this scheme in part as follows (his words here): . . .